Ultra-Orthodox women fight for their right to higher education

The religious ruling of Rabbi Shalom Cohen against higher education for women shook the Sephardic ultra-Orthodox party Shas, at a moment when its political leaders are trying to regain traditional constituents and secular support. 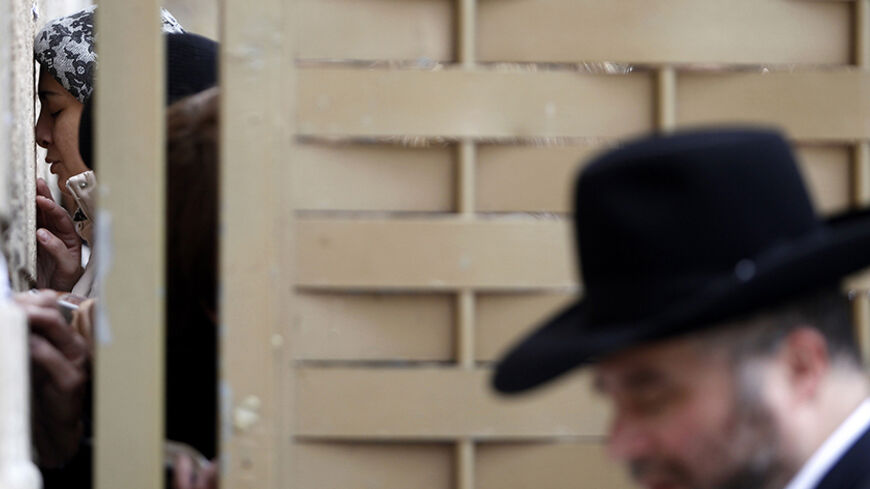 A woman prays on one side of a partition at the Western Wall in Jerusalem's Old City, Feb. 11, 2013. - REUTERS/Baz Ratner

Things reached a peak when Adina Bar Shalom, daughter of the party’s founder late Rabbi Ovadia Yosef, founded an academic college for ultra-Orthodox women. This track contradicted the general orientation of the Ashkenazi ultra-Orthodox world, but the unswerving support of the esteemed rabbi for his daughter’s educational enterprise caused thousands of the movement’s members and supporters to integrate the ultra-Orthodox lifestyle with academic studies.

The issue of women’s study was always part of the great ultra-Orthodox dilemma, certainly with regard to higher education: How much — if at all — should they open up to the modern secular world? Or should they continue to isolate themselves within the walls of their community? Now, this issue is at the heart of a great struggle in Shas and threatens to harm the party’s chances to survive in the post-Rabbi Yosef era.

On June 23, a dramatic turnabout took place. Less than a year after the death of the revered leader, his successor Rabbi Shalom Cohen, 83, made known that women are forbidden to pursue a higher education because it contradicts the Torah path. This unequivocal rabbinic ruling shook up Shas’ ultra-Orthodox world and beyond. But above all, it engendered a giant question mark regarding the ideological identity of the Sephardic ultra-Orthodox movement. Will Shas continue to legitimize to a certain extent some of the non-ultra-Orthodox life values, or will it isolate itself behind a wall of religious fanaticism? Whichever path Shas chooses is likely to have a fateful influence on shaping the identity of the country and affecting the delicate balance between the state and the ultra-Orthodox world. For years, the state has been working untiringly to integrate the ultra-Orthodox in the world of higher education and the work force. Shas’ academic enterprise is viewed as a giant step toward the integration of the ultra-Orthodox sector in the Israeli existence.

Though Yosef was a devout ultra-Orthodox Jew, he did not hesitate to wink at the secular world — in his relatively liberal rabbinic rulings that conformed to the traditional lifestyles of the Sephardic sector he represented, and in the political alliances his party created with the right and the left. He was the man who instructed Shas to join Yitzhak Rabin’s secular coalition in 1992, and he was the one to give the stamp of approval to diplomatic decisions viewed as “left-wing,” notably the readiness to trade territories for peace.

Yosef exhibited a similar stance with regard to academic studies for women. He used to pay regular visits to the academic college founded by his daughter Adina, and openly encouraged academic studies among Shas women. Not infrequently, the rabbi would sit next to well-known women on the podium during graduation ceremonies, and after the greetings he even allowed the women to kiss his hand. Scenarios like this could not take place in the Ashkenazi ultra-Orthodox world, and may even be viewed as heretical.

On the background of the relatively liberal legacy dictated by Yosef, successor Rabbi Cohen pulled out a religious ruling of a different tenor. The ruling was made public when an ultra-Orthodox woman turned to Cohen to ask whether it was permissible for her to acquire an academic education after completion of her studies in a seminary for young women. “Today, we witness the phenomenon of female seminary graduates who apply to, and want to attend, academic studies,” Cohen wrote her in a response that was published around the ultra-Orthodox press. “But the great sages of Israel absolutely opposed academic studies, even in ultra-Orthodox colleges, since a significant percentage of the lecturers are university graduates and do not share the pure Torah worldview on which we were raised.”

All eyes turned to Yosef’s daughter. In May, Adina won the Israel Prize for her unique contribution to the education of ultra-Orthodox women. Her enterprise was grasped by the public at large as a bold attempt to connect to Israeli values. When she rose to the state to receive the prize, many people (mostly secular) rose to their feet and applauded.

Others in Shas turned their gaze to Knesset member Aryeh Deri, the party’s all-powerful leader. Deri, who was raised in a traditional Moroccan family, is viewed as someone who helped built a bridge between ultra-Orthodoxy and the secular world. He would take every opportunity to proudly mention his wife, Yaffa Deri, who heads an academic college for ultra-Orthodox women. The new rabbinic ruling has caused great consternation for Deri. It is an open secret that Deri pushed for the appointment of Rabbi Cohen, who is also referred to as Chacham (Sage) Shalom Cohen and known for his religious fanaticism. In doing so, Deri rejected Israel’s former Sephardic chief rabbi and candidate, Shlomo Amar, the more moderate and liberal contender who viewed himself as Yosef’s heir.

“Chacham Shalom’s ruling is a warning sign that threatens the continued existence of the movement itself,” Roi Lachmanovitz told Al-Monitor. Until recently, Lachmanovitz served as close adviser to Knesset member Eli Yishai, former leader of the Shas movement. “A fierce struggle is being waged in Shas regarding two [opposing] processes that can have great influence on Sephardic ultra-Orthodoxy and the entire Israeli society, as well. Are we marching toward Israeli-ness, or to isolate ourselves in ultra-Orthodoxy? That is the dilemma. Chacham Cohen’s ruling sends Shas a giant step backward because it adversely affects the status of the ultra-Orthodox Sephardic woman and denies her a higher education. I tend to think that this will not go over quietly because this path is liable to turn Shas into a political party without constituents.”

Adina has not publicly criticized the ruling of the man who replaced her father as Shas authority. However, personal letters that Yosef wrote in favor of academic colleges for ultra-Orthodox women appeared this week in the ultra-Orthodox press. Evidently, this was the work of Adina’s proxies. The last 24 hours have seen tremendous pressure exerted on the movement’s heads to avert an ideological and political crisis. “I think that Chacham Cohen will make a statement in the near future that he was not understood correctly and will express support for women’s studies,” added Lachmanovitz. “Otherwise, Israeli society will lose an important political movement that champions integration, not isolation.”