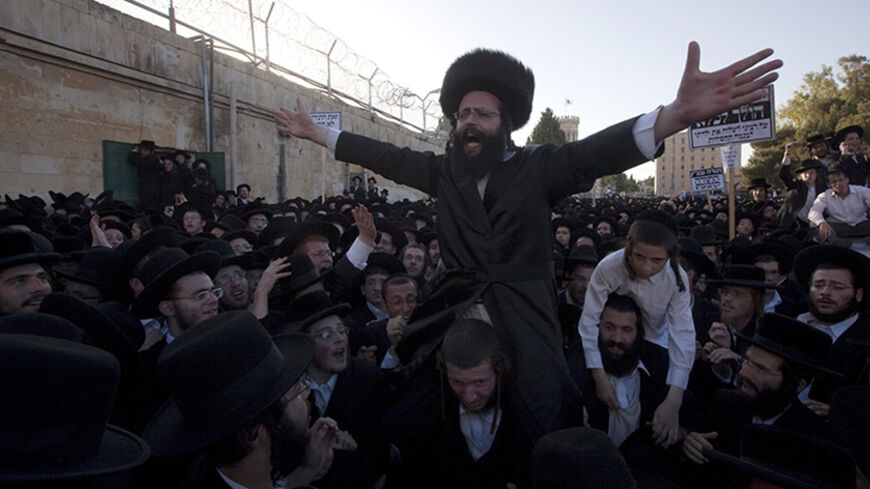 An ultra-Orthodox Jewish man is carried by his friends into a Jerusalem police station as tens of thousands of ultra-Orthodox protest his sentence for refusing to send his daughter to a school with Sephardic girls, June 17, 2010. - AFP/Getty Images/Menahem Kahana

Registration for the Beit Yaakov school in the town of Elad near Rosh HaAyin ended two weeks ago. More than 120 families attempted to sign their daughters up for this all-girls school. Elad is an ultra-Orthodox town. Boys and girls are kept completely separate in all its education frameworks, just as they are in every other ultra-Orthodox settlement throughout the country. The girls from all 30 Ashkenazi (of Eastern European origin) families who registered their daughters for the school were accepted. In contrast, only five girls were accepted from the approximately 100 Sephardic (West Asian) families, who tried to register their daughters there. The rest of the girls hoping to attend were rejected and told that they did not meet the acceptance criteria.

The enormous commotion that ensued reached far and wide within just days. Parents whose daughters were rejected accused the school of segregation against Sephardic Jews. They submitted a petition to the Ministry of Education, demanding that the entire registration process be overturned because the rejection was tainted with discrimination. Meanwhile, the school’s administration insisted that they acted in good faith, and that it was only by coincidence that all the girls who were rejected came from Sephardic families. The town’s rabbis were asked to intervene and the incident made it all the way to the minister of education’s desk.

This was not the first time that ultra-Orthodox educational institutions have tried to keep out students of Sephardic background. Within the past few years, the Supreme Court was requested to rule about the degree to which the Ashkenazi ultra-Orthodox could use ethnic background as a gauge for acceptance in schools. In other words, the court was asked to decide whether Ashkenazi schools could reject potential students simply because they were not Ashkenazi.

Ever since the country was established, Israel has succeeded in creating mechanisms to prevent discrimination against minorities. In fact, it has built bridges on which almost all the country's citizens could walk. Jews and Arabs, religious and secular, men and women, Sephardic and Ashkenazi Jews, old-timers, new immigrants, veterans and others all benefit from a series of basic laws, understandings and social compacts that grant them all the status of citizens with equal rights. All except for one group, that is. Ashkenazi ultra-Orthodox Jews maintain their customs and traditions with blind fanaticism. There is little they will not sacrifice to perpetuate a lifestyle that draws on how they lived in Eastern Europe more than three centuries ago.

The Sephardic rabbis of Elad are convinced that discrimination because of their ethnic background lies behind this year’s rejection of Sephardic students by the school. Five years ago, when the school year began, a single girl was kept out of the class. She was of West Asian origin. Though she was only in the first grade, she had already been exposed to the segregation that pervades the ultra-Orthodox world. The Sephardic residents caused a commotion, which echoed throughout the country, and even the court was asked to intervene, so that a six-year-old girl would be allowed to go to school. In response to the court’s ruling, the parents of the Ashkenazi students decided to keep their daughters home, effectively shutting down the school. It was only after the country’s leading Ashkenazi rabbis intervened that the parents agreed to abandon their strike, and the girl was allowed to join the class.

History is repeating itself and in a big way in the very same ultra-Orthodox town with a mixed population and in the very same school, where Ashkenazi girls study alongside Sephardic girls. Following the commotion and in responses to all the complaints that it received, the Ministry of Education has announced that the new school year will not open in Beit Yaakov and that it regards the entire registration process as an affront to education and the spirit of Judaism. “The Ministry of Education regards any discrimination on the basis of religion, race or ethnicity as an egregious act,” read a statement released by the ministry. It is clear to the local residents that more Sephardic students will be accepted into the Beit Yaakov school as a result of this outside intervention.

“This is absolutely shocking!” said the mother of a girl who was rejected. “How can anyone live with something like that? How can anyone act that way in 2014? Our lives are on hold. My husband can’t study. I am upset at work and at home. My daughter is an excellent student, so why wasn’t she accepted? Because she’s Sephardic? This whole story is a case of black and white hypocrisy.”

Elad is a city of 45,000 people in the center of the country, and was established just 15 years ago for the sole purpose of providing a response to the rapid growth of Israel’s ultra-Orthodox population. Despite the separation between its Ashkenazi and Sephardic communities, it is home to ultra-Orthodox Jews of every persuasion and background. Virtually every major street has a rabbinical college or seminar where the men spend most of the day and even a large part of the night in study. The town’s commercial centers are crowded with women, most of them pregnant and already pushing strollers and baby carriages. Elections for mayor, which took place just a few months ago in October 2013, saw the Ashkenazi candidate defeating the Sephardic candidate by just a handful of votes. The Ashkenazi neighborhoods celebrated his victory well into the night. In contrast, a doleful sense of mourning could be felt in all the Sephardic neighborhoods.