The Ailing Rabbi Ovadia Yosef, Who Sought to Prevent Wars

Rabbi Ovadia Yosef, the first rabbi who ruled that preventing bloodshed takes precedence over keeping territories, is fighting for his life. 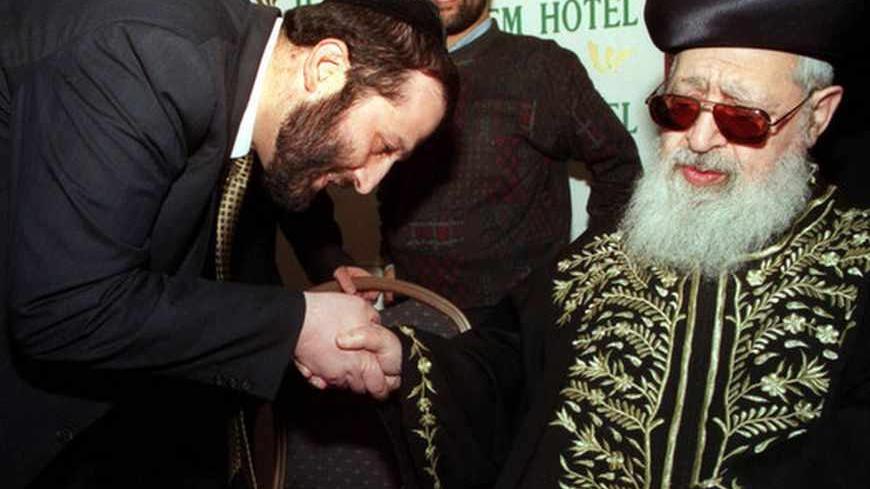 These days Rabbi Ovadia Yosef is fighting for his life. Yosef, 93, one of the most important halachic (Jewish religious law) scholars of recent generations, changed the face of Israeli society and politics and still constitutes one of its most significant forces. Over the years the rabbi was as sensitive as a seismograph to his followers’ sentiments. He was then, and still is, one of the greatest influences on the peace process in the region. Large segments of the Israeli public are following his declining health with trepidation.

In 1979, long before Ultra-Orthodox Shas party was established and became a strong and influential movement, Yosef was the country’s chief Sephardic rabbi. On the agenda was the peace agreement with Egypt, which for the first time in the history of the state entailed a return of land.

At a conference to which he was invited in those days, the rabbi delivered a speech entitled “Jewish law and Peace.” In their fascinating book Rabbi Ovadia Yosef, the Biography, journalists Anshel Pfeffer and Nitzan Chen describe how seriously the rabbi treated the diplomatic issue, researching deeply the point of view of “pikuach nefesh,” the Jewish term denoting the sanctity of life. In his speech he decreed that it’s permissible to give back land in order to prevent war and bloodshed.

“If the heads and commanders of the military, together with members of the cabinet, determine that life may be endangered if parts of the Land of Israel are not returned and there’s a chance of immediate war on the part of the Arab neighbors; and if the lands are returned to them, the danger of war is removed and there are chances of a sustainable peace, it appears there’s no doubt areas of the Land of Israel may be returned for such a purpose, as there’s nothing that stands in the way of preservation of life,” the rabbi said.

In doing so, the rabbi created two precedents. His ruling was opposed to the traditional religious dogma regarding the Land of Israel (that it must remain in Jewish hands), and provided the military and the government with authority that was, in essence, that of the highest rabbinical authority.

Chen and Pfeffer contend in their book that the rabbi’s decision was the result of a trauma he endured in the 1973 Yom Kippur war, when he was forced to release 900 widows from their wedding vows because their husbands were missing and no one knew what had happened to them. “Is it possible for Jewish blood to be spilled like water?” the rabbi asked in an interview quoted in his biography. “I personally knew several of the boys who were killed and I learned about the circumstances in which they were killed. Horrible, terrible! So I will sacrifice the life of a people for a piece of land? For a mountain or a hill? I feel I have fulfilled a great duty.”

These remarks raise an important point, which marks the rabbi’s rulings and attitude toward the issue of the diplomatic process: Ovadia Yosef, then as now, is one of the few leaders who is attentive to public sentiment and understands the goings on among the people. He meets the public, he knows when he can dare to institute change but also to what point he can lead those who put their trust in him and what are the limits and limitations.

Yosef always remembers the identity of his followers: a Sephardic, traditional and ultra-Orthodox public, the vast majority of which holds right-wing views. This is the public which, on the one hand, can accept policy changes under certain circumstances, but which cannot withstand too much of a radical change. The Book of Proverbs (22:6) commands us to “train each child in his own way, and even when he is old, he will not depart from it.” Yosef explains it in one of his daily rulings (following the Talmudic Shabbat tractate 156 and Maimonides): “One must take into account a boy’s character and educate him according to his nature. If his nature dictates that he become a blood-shedder, his characteristics must be channeled into positive avenues, such as training him to conduct circumcisions or ritual slaughter, rather than letting him turn into a robber, God forbid.”

This was also how the rabbi treated his public upon the establishment of Shas, which completely changed Israeli politics.

In 1989, when Israel was ruled by a national unity government, then-Finance Minister Shimon Peres arranged a visit for the rabbi in Cairo and a meeting with then-President Hosni Mubarak. Peres expected the rabbi to emerge from the meeting with a powerful statement regarding the peace process with the Palestinians. But the rabbi, who understood that his followers would accept a meeting with a senior Arab leader but not a statement that would be construed as kowtowing to him, failed to deliver the goods. Upon emerging from the meeting, he said: “We did not talk about how much would be returned and what would be returned. We discussed how precious is the soul of a Jew.”

Several months later the rabbi explained: “I haven’t changed my mind about the sanctity of life being paramount and exceeding the sanctity of the Land of Israel. … The problem is I don’t know what will endanger life, what would be more dangerous for the people of Israel — returning lands or not returning them?”

Peres asked Yosef to meet with top military commanders in order to convince him to back the negotiations, thereby instituting a new tradition: senior military and defense officials making pilgrimages to the rabbi’s home to brief him on security issues. Unlike the ultra-Orthodox Ashkenazi public, most of whom do not enlist into the army, some Shas voters are traditionalists and do enlist. Rabbi Yosef knew that this public trusts and respects senior defense officials.

The most fascinating milestone in the rabbi’s political-diplomatic way was the decision to abstain in the Knesset vote on the Oslo Accords in 1993, thus providing a majority in favor of the agreement. From that moment on, Shas was perceived as a moderate political party which would legitimize peace agreements. But when the wave of terrorist attacks began in the 1990s, and Palestinian suicide bombers blew themselves up on buses around the country, the rabbi, attentive to his public, withdrew his support for the agreement.

Much water has flowed under the bridge since the days of the Oslo Accords. Shas today is a right-wing party and Rabbi Yosef no longer hands down proclamations in the spirit of that surprising and courageous one of several decades ago. Nevertheless, these days, with Shas pushed out of government and onto the opposition benches, one can discern signs of change. Its people even go on tours of the territories organized by the peace movement in order to show them the extent to which the Jewish settlement enterprise in the West Bank mountain ridge is harmful to Israel. When I met Rabbi Yosef’s daughter Adina Bar Shalom on one of these tours, she told me clearly: “If a signed and supported agreement were to be brought to my father today, he would approve it. His basic world view hasn’t changed.”