Rabbi Ovadia Yosef 'Was Willing To Give Back the Temple Mount'

David Glass, Shas Party legal adviser, reveals in an exclusive interview with Al-Monitor that Rabbi Ovadia Yosef preferred peace to land in dealing with the Palestinians. 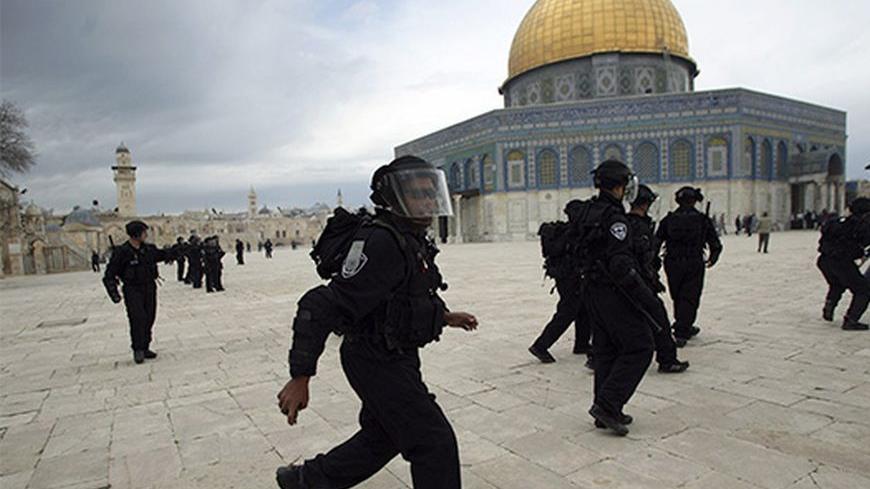 Israeli border police run in front of Dome of the Rock during a protest at a compound known to Muslims as Haram al-Sharif and to Jews as the Temple Mount, in Jerusalem's Old City, Feb. 22, 2013. - REUTERS/Muammar Awad

Attorney David Glass, 77, is better known in the media by his official title, “the legal adviser of the Shas Party.” He acquired a reputation as a confidante of Rabbi Ovadia Yosef and as the spiritual leader’s point of contact with the political world. Not many know that Glass is a unique mixture in Israeli politics: he’s a Zionist, religious, left-wing Ashkenazi (of European origin) who pulls the strings of an ultra-Orthodox Sephardi (of North African and Asian origin) party.

Glass is part of the Geneva Initiative, a 2003 peace agreement with the Palestinians based on the 1967 borders with slight mutual border alterations and the division of Jerusalem. He is a frequent flyer to peace meetings with Arab leaders and works tirelessly to instill the values of peace and reconciliation in Has activists. The veteran attorney, who served a director-general of the Ministry of Religious Affairs (1974-1977) and chairman of the Knesset’s Constitution and Law Committee (1977-1981), once told me that his life’s dream is to wake up in his Jerusalem home, get in his car and drive to Europe. Yes, in return for peace, Glass is willing to give back the Golan Heights to Syria.

Several hours after accompanying his rabbi and hero to his eternal resting place (on Oct. 7), Glass told Al-Monitor about the rabbi’s views on matters of war and peace.

Al-Monitor: What was the genesis of the rabbi’s groundbreaking halachic ruling in favor of territorial compromise?

Glass: It happened in 1979, following the peace agreement with Egypt, which stirred a tremendous swell of criticism on the part of rabbis and settlers protesting the relinquishing of lands to Arabs. The rabbi, who was then the country’s chief Sephardic rabbi, was invited to speak at the Rabbi Kook Institute (the stronghold of the pro-settlement Gush-Emunim movement) and delivered the remarks that constitute that halachic ruling.

He was still under the deep impression of the Yom Kippur War, after which some 1,000 wives of soldiers who had been burned in their tanks or pilots whose planes blew up in the air remained "chained" by Jewish law to their dead husbands. Most rabbis run like wildfire from releasing agunot (the halachic term for such women) from their marriage contract, in the wake of several incidents in which the husband came back from captivity after the wife was granted rabbinical permission to remarry.

I still keep the rabbi’s speech at the Kook Institute and I wish to read to you the relevant paragraphs:

"There were serious accidents in the Yom Kippur war when agunot of MIAs came before us and asked for permission to marry. We sat for six months, from morning to night. Nothing but bones and ashes were left from those righteous ones who fell in battle. We gathered testimony from soldiers who were present during the fighting and tears ran down their cheeks like water. In daytime we sought to provide the agunot with permits [to remarry], at night we knew no sleep. We had nightmares. For six months we buried our heads in nearly 1,000 files of agunot whose husbands had died cruel deaths.

Can we afford to allow Israeli blood to flow like water? In the last war, some 3,000 were killed. Why should we bring upon ourselves another war and another war? I personally knew many of the fallen. Why send more young people into battle. One must say this openly. The halacha does not forbid withdrawal from territories in return for peace. One Jewish soul is worth all the territories. We all appreciate the command ordering us to settle the Land of Israel, but everything has its limits. It’s inconceivable to abandon souls of Israel for some piece of land."

Al-Monitor: What were the reactions to the rabbi’s speech?

Glass: Many rabbis, chief among them Rabbi Shlomo Goren, who was the chief Ashkenazi rabbi at the time, were sharply critical. It should be noted that later, the rabbi qualified this halachic ruling, according to which any threat to life requires withdrawal from territories, saying that withdrawal was possible if the generals determine that the territories constitute a problem.

Al-Monitor: I assume the rabbi knew of your activity in the Geneva Initiative and meetings with Arabs and that you would have desisted unless you had the rabbi’s blessing. Knesset member Yitzhak Vaknin (of Shas) would not have attended the recent J Street conference in Washington against the rabbi’s wishes. His daughter, Adina Bar-Shalom, would not have traveled with the heads of the Israel Initiative to a meeting with Palestinian President Mahmoud Abbas (Abu Mazen) at his headquarters in Ramallah.

Glass: Of course. Following my participation at the signing ceremony of the Geneva Agreement in Geneva, Switzerland in 2003, Knesset member Shaul Yahalom of the National Religious Party attacked Shas for its support of the agreement. As proof he noted that the party’s legal counsel, David Glass, signed the agreement. The party chairman, Eli Yiashai, went to Rabbi Ovadia and asked him to publish a condemnation of the initiative. A member of the household who was present at the meeting told me, as did Yishai himself later on, that the rabbi wanted to know why Yishai thought the agreement was wrong, saying: "How can I object to peace?"

Yishai answered that "they are willing to divide Jerusalem and give back the Temple Mount." To the surprise of those present, the rabbi ruled that "for the sake of peace, one may return the Temple Mount." I am telling you with certainty, that this was his view. The seminaries held by the Geneva Initiative for Shas activists and Vaknin’s trip and Adina – all was these had the rabbi’s basic agreement. We didn’t ask him for permission for each activity, but we knew we had his blessing.

Al-Monitor: How do you explain the disparity between his dovish stance and his hostile comments against Arabs and the Shas votes against peace moves and against freezing settlement construction?

Glass: There’s no contradiction. When the rabbi said that peace is preferable to territories, it wasn’t because he loved Arabs. He even admitted that he couldn’t stand them, if not worse. He loved Jews and determined that peace was preferable to lands because peace ensures the existence of the Jewish people. You and I are sensitive to the human aspects of the occupation. For him, this element did not exist.

It’s true that for various reasons Shas did not support all peace moves, but had it not been for the rabbi’s order to the party’s members of Knesset to abstain in the vote on the Oslo Agreement (the 1993 agreement between Israel and the Palestinians), the agreement would not have been approved by the Knesset. Even Eli Yiashai, who is protrayed, rightly so, as a right winger, told me he accepts the rabbi’s halachic ruling. But he claims that in the current circumstances, there’s no interlocutor on the Palestinian side.

Al-Monitor: What was the rabbi’s position regarding an Israeli military attack on Iran?

Glass: He strenuously objected to attacking Iran and instructed Eli Yishai, when he was a member of the previous government, to present a determined stand against a military option. The rabbi did not like wars. He learned their cost firsthand. I am also completely convinced that out of a desire to prevent an additional war, if Prime Minister Benjamin Netanyahu had put a peace agreement to a referendum during Rabbi Ovadia’s lifetime, the rabbi would have urged his public to support it. This week we saw that he had many more followers than those who just support Shas.

Al-Monitor: But a significant number of those who walked behind the coffin, if not most of them, turned right.

Glass: That’s true. I’m in daily touch with those people. But unlike the Ashkenazi Jews, who hold onto their views, the Sephardic Jews are willing to hear and adopt other views. As far as peace goes, no one denies that the rabbis ruling regarding peace is in force and is binding. Most members of the Shas Knesset faction support peace. We will continue our political activity and our teaching for peace. Shas will not easily go along with the right wing and will not reject the option of going with the left.