No man has shaped the face of modern Israel as has the spiritual leader of the ultra-Orthodox Shas Party, the official king of Sephardic Judaism, Rabbi Ovadia Yosef. 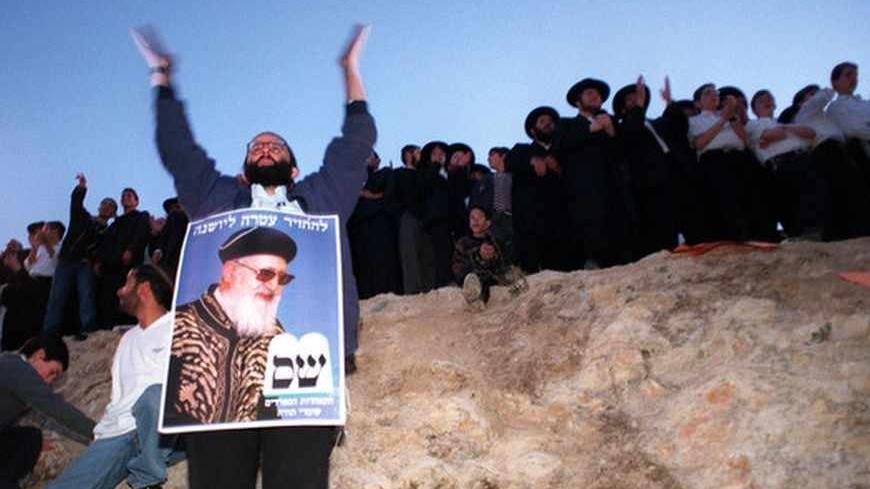 A Shas supporter, wearing a poster of Rabbi Ovadia Yosef, the spiritual leader of the ultra-orthodox Shas party, joins thousands of other supporters outside the rabbi's home, March 27, 2009. - REUTERS

They have always made a pilgrimage to him. No other figure in Israel has been sought after by so many politicians, public figures and ordinary people. Although he lived as a recluse in his small home in Jerusalem, everyone made a pilgrimage to him, whether it was to receive his blessing or support, merit a prayer from his lips or especially enjoy the wondrous touch of his hand, whether in a caress or of course a gentle slap on the cheek.

As he got older, his power only grew. As he grew weaker, he only grew stronger. As he lost his capacity to speak, his unclear words were accepted by his many acolytes as the words of God that came down to earth. No other man has shaped the face of Israel in the last three decades like Rabbi Ovadia Yosef, 93, a man of the book and a man of contemplation who distanced himself from others, but whose very presence paved new roads in Israeli politics. With a stroke of his hand he helped build a coalition — with a similar stroke he caused its dismantling. Only a few have understood his religious-legal rulings and decisions, but everyone knew he had the last word. In religious law as well as in political rulings.

With time, he became the official king of Sephardic Judaism. Hundreds of thousands thronged after him as if he were a torch lighting their way. Religious and secular Jews of Sephardic origin saw him as the spiritual leader who would bring them out of the darkness in which they had been trapped since they immigrated to Israel. All groups and all sectors had found a place in Israeli society and politics, and only immigrants from Arab countries felt like sheep without a shepherd. For decades, they sought a leader whom they could crown as king, but they failed in their quest. Repeated elections did nothing to redeem them. Politics have always been seen as a reflection of power relations in society. The political parties of the founders of the state always defeated the parties of those who weren’t among the founders. This result had a socioeconomic as well as an ethnic connection.

And then one day several ultra-Orthodox believers of Mizrahi [Oriental] background rose up, burst into Israeli politics and changed it beyond recognition. From now on, it will no longer be the same. The Shas movement was born in 1984 because Sephardic-Oriental Torah scholars felt rejected by the Ashkenazi-Eastern European ultra-Orthodox establishment. They didn’t accept them at their institutions, they didn’t marry them, they didn’t live in their midst and they treated them as inferior. The establishment of the Shas Party was meant to use political power to correct an institutionalized discrimination and a twisted reality.

Neither on the left nor on the right, from the moment he entered the political scene new spiritual leader Yosef declared that the movement came to the world to restore the glory that had been lost. To return the lost pride of hundreds of thousands of Sephardim in Israel who have been humiliated by their Ashkenazi brothers, with no connection to the division between the political left and right.

Thanks to the neutral stance adopted by the movement, its spiritual leader became the most sought-after target for political leaders. They made a pilgrimage to him, waited outside his door, covered their head with a skullcap, listened to him for hours although they were not always able to decipher his words and often degraded themselves. This Via Dolorosa was intended to achieve one goal: to win the support of the Shas Party in building a government coalition.

Out of all of his legal rulings, one has entered Israel’s political pantheon. In 1990, during the rule of a unity government comprising Labor and Likud, Yosef was asked his opinion of a withdrawal from the West Bank. The Labor leader, Shimon Peres, supported an arrangement with the Palestinians in exchange for the return of territory, while the Likud leader, Yitzhak Shamir, opposed it at all cost.

In an interview on Israeli television, before the nation, Yosef explained that in Judaism the protection of human life overrides all else. In other words, to achieve peace one may return territory.

The political system boiled over and the ultra-Orthodox world — always identified with the right — was in turmoil. Against this backdrop, Yosef instructed Shas' Knesset members not to vote against the Oslo accords in the Knesset. This support was depicted as more precious than gold: it enabled then-Prime Minister Yitzhak Rabin to win support for the agreement with a majority of Jewish Knesset members. Rabin and his colleagues had feared that gaining the support of a majority that would include Arab Knesset members could hurt the agreement’s legitimacy with the public.

In the last two decades, the Shas Party has turned sharply to the right because of the arrest of the movement's leader, Aryeh Deri. Deri, who was an active partner in the establishment of the Shas Party, has recently returned to Israeli politics after an absence of 10 years, two of which he spent in jail. With his return, the movement has returned to its previous strength, and the winning combination of the spiritual leader and the political prince has also returned to its previous strength. However, for the first time in years, the Shas Party has been left out of Prime Minister Benjamin Netanyahu’s coalition. The anti-ultra-Orthodox wave that washed over Israeli society before the last election on Jan. 22 dictated a government without the ultra-Orthodox. It is likely, though, that diplomatic developments in the talks with the Palestinians could return the Shas Party to the coalition, a homecoming of sorts.

But a big question mark hangs over the existence of the movement, as if it were a black cloud. What would happen to the Shas Party without the powerful presence of its spiritual leader Yosef? There’s no other man in the movement who inspires such ecstatic admiration. There’s no other man, who, whenever he appears before them, believers jump to their feet and sing and dance for him, as if he were the messiah. There’s no similar charisma in the field. There’s no spiritual authority that everyone honors. This is a movement that flourished around one elderly man, whose very existence breathed life into hundreds of thousands.

What will be after him? There’s never been such a profound sense of orphanhood. Over the years, no one dared to think about the day after, as if it were a nightmare.