As the elections approach, ultra-Orthodox leaders are accusing Israelis who immigrated from Russia and Ukraine of coming to the country to weaken their political force. 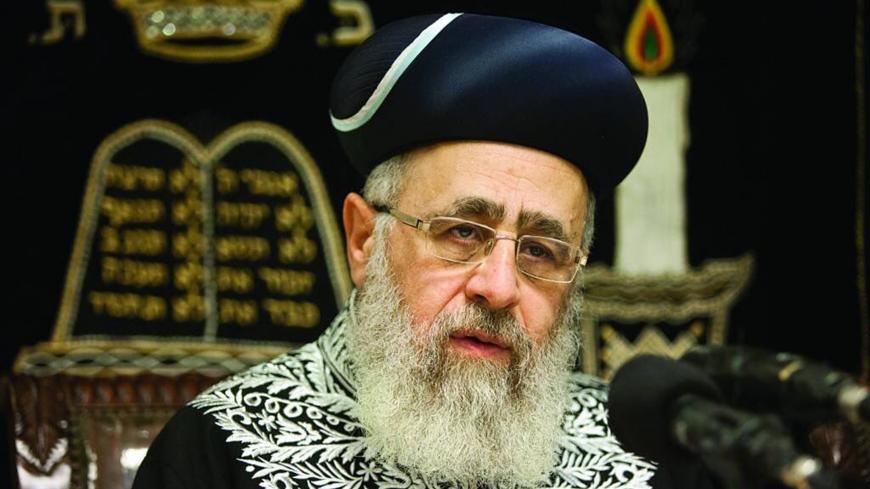 Two months ahead of Israel’s third round of elections in less than a year, all means appear to be justified by the end of gaining as many votes as possible on March 2, including the spreading of falsehoods, wild incitement against entire population groups and dissemination of absurd conspiracy theories. This week Israel’s Chief Sephardic Rabbi Yitzhak Yosef, the son of the founder of the ultra-Orthodox Shas Party, spread serious allegations regarding the Jewish identity of Israelis who immigrated from the former Soviet Union and Israel’s motives in bringing them into the country.

The comments by Yosef, a senior public official on the government’s payroll, were made at a recent conference of rabbis in Jerusalem and they were reported Jan. 7 by Ynet. The chief rabbi stated, “Tens or hundreds of thousands of non-Jews came here under the ‘who is a Jew’ law,” the chief rabbi stated, referring to an amendment to the law of return that allows the immigration of grandchildren of Jews. “Some are communists, hostile to religion, haters of religion. They're not even Jewish, they're gentiles. … They were brought here to provide a counterweight to the ultra-Orthodox so that if elections are held, there will not be many votes for the ultra-Orthodox. That was why they were brought here. Total non-Jews. Unfortunately, we see the fruit of the incitement they conduct.”

It was not the first time that ultra-Orthodox politicians and rabbis have sought to make political capital on the backs of the more than one million immigrants from the former Soviet states. During the 2013 election campaign, Shas posted a satirical video of a Jewish wedding between an Israeli-born groom and Russian-speaking bride that suggested immigrants were undergoing fictitious conversions to Judaism. The video caused a storm at the time, but six years on, ahead of the April 2019 elections, Shas leader Aryeh Deri was back with the familiar refrain, declaring at a rally in Ashdod that immigrants from the former Soviet Union are DNA tested to prove their Jewishness. He later clarified that his ministry does not conduct such tests.

The current tirade against Israelis who immigrated from the former Soviet Union followed a Dec. 23 Ynet report of a document compiled by the Population and Immigration Authority according to which 86% of those immigrating to Israel are non-Jews. The report also noted that only 4.3% of immigrants from Russia are Jewish. Several hours later, the Interior Ministry conceded that the figures were imprecise, but still claimed that most immigrants from Russia and Ukraine were not Jewish.

The saga continued on Dec. 30 with Yosef calling Yisrael Beitenu head Avigdor Liberman “evil” and suggesting that the Moldovan-born politician go to eat pork in Ashdod, which has a large Russian-speaking population. On Jan. 2, two Russian-speaking Israeli women complained of anti-Semitism among the immigrants in an interview with ultra-Orthodox pundits Yossi Elituv and Aryeh Erlich on Israel’s public radio. The women claimed that the Ministry of Immigration and Absorption, which in recent years been headed by members of Liberman’s party, had brought to Israel hundreds of thousands of anti-Semitic non-Jews so they would vote against the influence of religion on the state and against the ultra-Orthodox parties. Now one of Israel’s two chief rabbis is making the same claims.

Conspiracy theories are particularly popular among members of the right-wing and ultra-Orthodox parties, known as the “immunity bloc” for their support of Prime Minister Benjamin Netanyahu’s request for Knesset immunity from prosecution and his battle against the political left, the media and the state prosecution. They appear to have also taken hold in Shas, of which Yosef is an integral part. These conspiracy theorists claim that the ministry and other government agencies have conspired against the ultra-Orthodox and brought tens of thousands of non-Jews to Israel in order to undermine their influence.

Here are several facts regarding immigration from the former Soviet Union:

Yosef’s latest diatribe made headlines. The heads of the centrist Blue and White Party, the leftist Democratic Camp and Yisrael Beitenu issued harsh criticism of the rabbi’s claims. Liberman and fellow Knesset member Tamar Zandberg of leftist Meretz urged the attorney general to investigate the chief rabbi for incitement by a public official. Netanyahu’s response was fairly mild, calling the rabbi’s remarks “outrageous and inappropriate” but without naming the speaker or his job. “Immigration from the former Soviet Union is a huge boon to the State of Israel and the Jewish people,” Netanyahu added. He was probably afraid of angering his ultra-Orthodox partners and made do with a vague reaction, figuring that Russian-speaking Israelis would not rush to support his Likud in any case.

Many Israelis who came from the former Soviet Union 30 years ago or from Russia and Ukraine in recent years have told Al-Monitor they were insulted by Yosef’s comments. For the politicians, it may all boil down to nothing more than a political campaign, but anyone who has encountered exclusion or incitement related to their origin may view things completely differently.

Edward Doks, who immigrated from Ukraine 33 years ago, told the Russian-language Vesty newspaper that the rabbi’s comments remind him of the anti-Jewish incitement in the former Soviet Union. “There, I heard propaganda to the effect that all the communists were Jews. These days, nationalists use this myth, too. Now a new myth has been born: that non-Jews are communists. It seems to me that our rabbi has gotten kind of lost.”