Gaza's factions appear to be united in rejecting Israel's demand that the area should become a weapons-free zone. 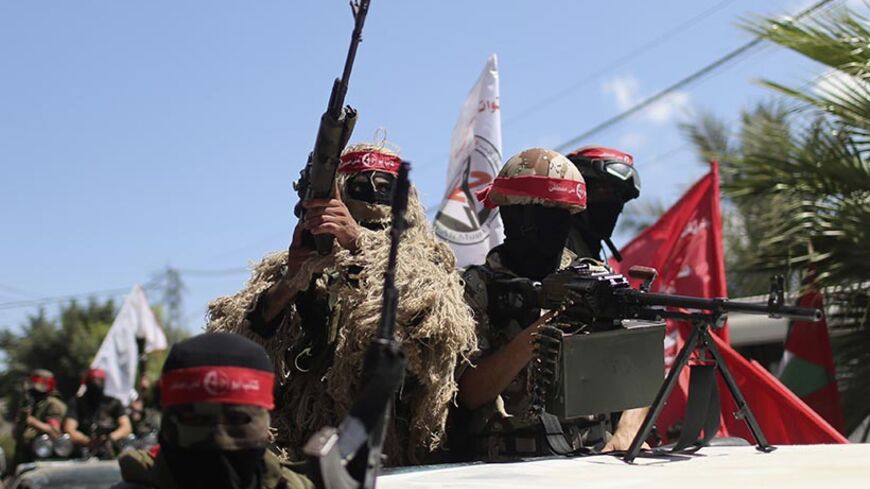 Palestinian militants from the Popular Front for the Liberation of Palestinian (PFLP) take part in a military show in Gaza City, Sept. 2, 2014. - REUTERS/Mohammed Salem

GAZA CITY, Gaza Strip — Palestinians believe it's necessary that the Palestinian resistance remains armed as long as the Israeli occupation persists in the Palestinian territories. They are convinced that the resistance's disarmament will lead to further losses of their rights.

Cease-fire talks between the resistance in the Gaza Strip and Israel, under the auspices of Egypt, collapsed multiple times before both parties reached an agreement on Aug. 26. A Palestinian source familiar with these talks told Al-Monitor that they had repeatedly failed because of "Israel's insistence on disarming Gaza."

"The disarmament of the resistance is completely rejected by us, and it was the reason talks faltered multiple times. The agreement was made after the scrapping of the Israeli demand to remove these weapons," said the source, who was a member of the Palestinian delegation in Cairo.

During a news conference Aug. 28, Hamas political bureau head Khaled Meshaal said: "The resistance and its weapons are sacred, given that they are the icon of the people, the shield that protects them and their path to liberation. There is no room to bring them into the circle of internal political [discussions], because there are no politics without a resistance and its weapons."

At the popular level, Palestinians reject the disarmament of the resistance, since they view the weapons as a protector and guardian from the repeated Israeli military attacks.

Mohammed Faraj, a Gazan taxi driver, laughed sarcastically when asked about his opinion on disarming the resistance. "Discussing this issue is silly to me, because Palestinians have no options to expel the Israeli occupation other than armed resistance," he told Al-Monitor.

An opinion poll conducted by the Palestinian Center for Public Opinion (PCPO) in mid-August on a random sample of 1,000 residents of the Gaza Strip showed that 93.2% of Gaza's population are opposed to disarming the resistance. Meanwhile, 3% were in support and 3.8% declined to answer.

Political analyst Hassan Abdo attributed the Palestinian insistence that the demand to disarm Gaza not be included in cease-fire discussions to the continuation of the Israeli occupation and the lack of an independent Palestinian state.

"The Israeli demand [to disarm Gaza] is neither logical nor accepted by the people or the factions. These weapons represent the Palestinian identity, and there is no one on the ground that can remove them as long as the occupation continues," he told Al-Monitor.

The Palestinian political insistence on the illegitimacy of disarming the resistance is not limited to Islamic factions such as Hamas and Islamic Jihad, which have been confronting Israel militarily. It also includes Fatah, which signed a peace agreement with Israel in 1993 and is pursuing the option of political negotiations to resolve the conflict.

In an unprecedented statement to Al-Mayadeen on Aug. 14, Abbas Zaki, a member of Fatah's Central Committee, said, "The Palestinian leadership has agreed that disarming the resistance is [akin to] betrayal."

Abdo said that the obstruction of political negotiations between the Palestinian Authority (PA) and Israel greatly contributed to the Palestinian people rallying around the armed resistance, considering it their savior from the Israeli occupation. "Since they began in 1993, the negotiations between the PA and Israel have not offered a single step in favor of the Palestinians. On the contrary, they contributed to an expansion of Israeli settlements in the West Bank," he said.

Political analyst Mustafa al-Sawaf confirmed Abdo's statements, pointing out that the disarmament of the resistance "is a step that cannot precede the ending of the Israeli occupation." He told Al-Monitor: "When the occupation ends and an independent Palestinian state is established, there will no longer be resistance arms. They will shift to the hands of the official Palestinian army. As for talks about achieving this step prior to the ending of the occupation, this is frivolous."

Sawaf also ruled out the possibility that the resistance would be disarmed with the return of the PA to the Gaza Strip. "The arms of the resistance will remain in the latter's hands, and I think that there are understandings between the PA and the resistance on this point," he said.

According to the Egyptian paper submitted to the parties regarding the arrangements related to the opening of crossings and ending the siege of Gaza, the Palestinian demands were based on handing over all these issues to the PA management.

The same source familiar with the Cairo talks said, "While it is true that the crossings, the borders and the land in Gaza will be completely under the management of the PA, this does not mean disarming the resistance. There is an understanding among the Palestinian parties that there is no contradiction between the existence of both the PA and the resistance's weapons in Gaza."

Hamas commented on this project, in remarks published in the Hamas-affiliated Felesteen newspaper on Aug. 30, saying: "Any international project aimed at disarming the Palestinian resistance has no value. What is required is disarming the Israeli occupation, and preventing the US administration from providing it with weapons that are used to kill children and women."

Political analyst Talal Okal said that such a project "would not force the resistance to disarm in any way." He told Al-Monitor: "This model repeats what happened with Hezbollah during the Israeli war on Lebanon in 2006, when the [UN] Security Council imposed restrictions on Hezbollah's weapons and deployed international forces along the border. But the reality shows that [Hezbollah] has become stronger than before."

"The Israeli blockade on Gaza lasting seven years did not succeed in weakening the Palestinian resistance, rather it was able to develop and [increase] its military capabilities," he said. He pointed out that Israel is using the card of disarming the resistance as a pretext to continue the aggression.

Okal said Israeli Prime Minister Benjamin Netanyahu was seeking to market the idea of disarming Gaza internationally, through comparing Hamas to the Islamic State (IS). "There are no similarities between the resistance in Gaza and IS," he said.