How Hamas plans to boost its declining popularity

The Hamas movement hopes a new exchange deal with Israel for the release of Palestinian prisoners will reverse its declining popularity among Palestinians. 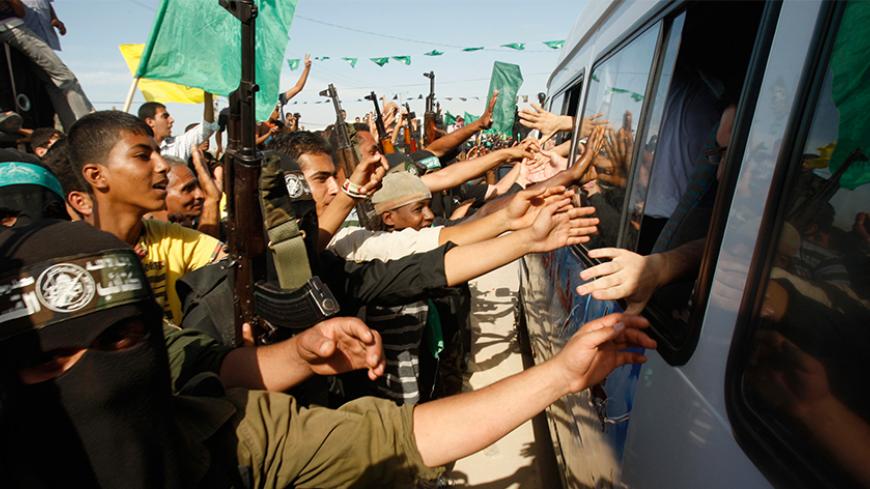 Members of Hamas' military wing and civilians greet freed Palestinian prisoners after a prisoner exchange with Israel upon their arrival at the Rafah crossing with Egypt, in the southern Gaza Strip, Oct. 18, 2011. - REUTERS/Ibraheem Abu Mustafa

GAZA CITY, Gaza Strip — Ever since the end of the latest Israeli war on Gaza on Aug. 26, 2014, Hamas has been working on a new exchange deal for the release of Palestinian prisoners from Israeli jails. By concluding this deal, Hamas hopes to show it is a major player in international efforts to resolve the Israeli-Palestinian conflict. Hamas also aims to restore its declining popularity among Palestinians due to the continuing deterioration of the living and social conditions in the Gaza Strip.

On April 1, Izz ad-Din al-Qassam Brigades, the military wing of Hamas, released four photos of Israelis it had detained, including soldiers Oron Shaul and Hadar Goldin, who had been captured during the Israeli war on the Gaza Strip in 2014. The third photo was that of Israeli citizen Avraham Mengisto, who is of Ethiopian origin. Israel had officially announced his disappearance in July, but Hamas had not commented on the matter. The fourth detainee is soldier Hashim al-Sayyed, who is of Arab descent and a resident of the Negev in southern Israel. On April 20, 2015, Israel announced that he had left home and had not returned. Hamas refrained from revealing any details on how Mengisto and Hashem were captured.

Israel believes that Shaul and Goldin were killed during battles with Hamas in the 2014 war. On April 21, 2015, Israeli Defense Minister Moshe Ya'alon told Israel's National Public Radio, "Israel continues to make efforts to recover the remains of Goldin and Shaul, who were killed during Operation Defensive Shield and whose corpses are still being held by Hamas in the Gaza Strip."

Hamas has been careful not to give out free information about the captured Israelis. Abu Obeida, spokesman for the Qassam Brigades, appeared alongside the photos of the four captured Israelis on al-Aqsa TV, a Hamas-run satellite channel. He said that Israeli Prime Minister Benjamin Netanyahu “is lying to his people and deceiving the prisoners’ families. So far no talks or negotiations about the detained Israelis are being held. The enemy will not receive information about the four Israelis until it pays a clear price before and after the negotiations.”

Abu Obeida questioned Netanyahu's statements at a March 27 press conference, saying, “Strenuous efforts are being deployed in this respect. I am holding meetings for this purpose every few days. I was informed about two days ago of an important development.”

Although Hamas aspires to conclude a major deal along the lines of the Gilad Shalit prisoner exchange deal in October 2011, which led to the release of 1,027 Palestinian prisoners, it refuses to participate in any negotiations with Israel before the release of the prisoners that were re-arrested after being freed in the Shalit deal.

Israel had re-arrested 70 freed prisoners who were released by the Shalit deal on June 2014, coinciding with the kidnapping by Palestinians affiliated with Hamas of three Israeli settlers in Hebron, south of the West Bank.

Hamas' Minister of Prisoner Affairs Attallah Abu al-Sabah confirmed that Hamas aims to use these captives to clear the Israeli prisons of all Palestinian prisoners. He told Al-Monitor, “Capturing Israeli soldiers and exchanging them for Palestinian prisoners is a tactic adopted by all Palestinian factions. Israel has a long list of exchange deals concluded over the past decades with the resistance factions such as Fatah, the Popular Front and Lebanese Hezbollah."

He stressed that Hamas will not disclose any information on those soldiers without something in return, as was the case in the 2009 Shalit deal, when Hamas gave Israel a video showing that Shalit was alive in exchange for the release of 20 female Palestinian detainees.

Political analyst Eyad al-Qara told Al-Monitor that the release of prisoners is a priority for Hamas. He said, “Since the occupation of the Palestinian territories in 1967, Israel detained those who embraced the resistance activities, be they political or military. Thus, Hamas believes that there is a national and moral duty requiring it to liberate those who were detained for resisting the occupation.” He added, “Hamas wants to prove that it is committed to its obligations toward the Palestinian people, most notably the release of prisoners, especially those with long sentences and those who have spent more than 20 years in Israeli jails.”

According to a December report by the Palestinian Society Prisoner's Club, there are currently nearly 7,000 Palestinian prisoners in Israeli prisons. In an April 6 statement, the PLO Committee for Prisoners’ Affairs said that among the jailed Palestinians are 38 prisoners who have served more than 20 years and 504 sentenced to life terms.

Speaking to Al-Monitor, political analyst Talal Okal viewed that in addition to freeing the prisoners, Hamas seeks to achieve other objectives through a new swap deal with Israel. He said, “Hamas wants to escalate the resistance against Israel by reassuring Palestinians that if they are ever detained during their resistance actions, this detention will not last long. Hamas wants to emphasize that armed resistance is the only option to liberate the prisoners, and not the peace negotiations.”

He added, “The Israelis are carrying out daily detention campaigns within the Palestinian ranks. Therefore, there is an urgent need to continue to detain Israeli soldiers, which is acceptable to all the Palestinian factions, without exception.”

Okal added, “Hamas is trying to achieve political gains to increase its popularity, which has declined due to the deteriorating living conditions and growing resentment at the degenerating economic and social situation in Gaza.”

The latest opinion poll issued by the Arab World for Research and Development Feb. 6 revealed that Hamas' popularity is declining in favor of Fatah in the Gaza Strip. It showed that 18% will vote for Hamas, while 45.8% will vote for Fatah in the next legislative elections if they are held.

In terms of international gains, Okal believes that through the prisoner-exchange deal, Hamas wants to assert its position and importance as a key actor that must not be disregarded in international efforts to resolve the Palestinian-Israeli conflict.