Hamas official Moussa Abu Marzouk said a deal could be weeks away. 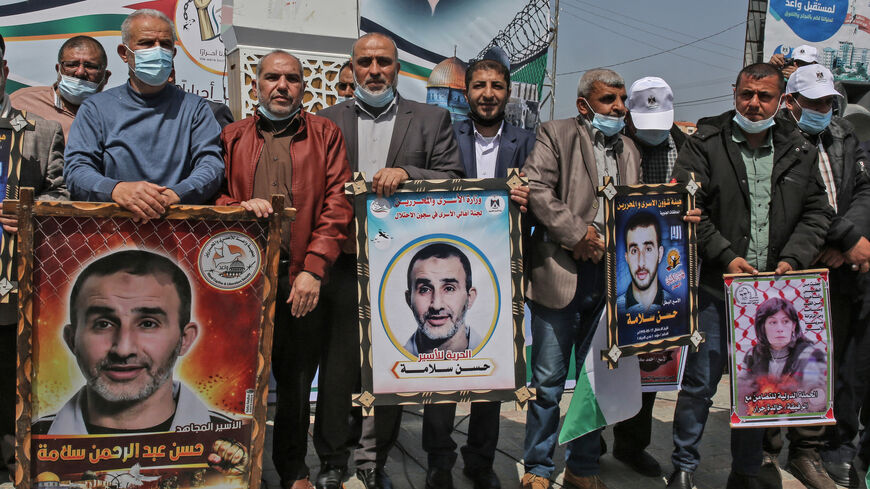 Palestinian demonstrators rally in support of Palestinians currently in Israeli jails, in Khan Yunis in the southern Gaza Strip on April 5, 2021, holding the portraits of prisoner Hassan Salameh (C, L) of Hamas alongside others. - SAID KHATIB/AFP via Getty Images

A top Hamas official said Friday that Israel and the militant group are making progress in talks over a potential prisoner swap, indicating that a deal could be weeks away.

Moussa Abu Marzouk, a member of Hamas' political bureau, told the London-based news outlet al-Araby al-Jadeed that a “fundamental development” had occurred in the discussions, according to The Times of Israel.

“This issue will be ready within weeks — if the occupation responds to the [Hamas] movement’s demands. The occupation is delaying, seeking to maneuver and buy time,” Abu Marzouk said.

Hamas, which rules the Gaza Strip, is believed to be holding the remains of Hadar Goldin and Oron Shaul, two Israeli soldiers who were captured during the 2014 war. The militant group is also reportedly detaining two former Israeli soldiers, Avera Mengistu and Hisham al-Sayeed.

On Thursday, Hamas official Zaher Jabareen said the group had delivered a prisoner exchange proposal to Israel via third party mediators. Egypt, which brokered the May cease-fire between Israel and Hamas, is also believed to be mediating the prisoner issue.

“We have presented a clear proposal to the enemy, with clear demands,” Jabareen told Radio al-Shams, declining to provide specifics of the proposal.

He added that the Hamas leadership will “pay special attention to the prisoners’ issue, especially those serving lengthy sentences.” Jabareen also said the group is asking for the release of Palestinian prisoners who were rearrested after a 2011 deal that swapped captured Israeli soldier Gilad Shalit for 1,027 Palestinians held by Israel.

Hamas’ military wing, the Izz ad-Din al-Qassam Brigades, is also now demanding that any prisoner exchange include the release of six recaptured Palestinian inmates who escaped from a maximum-security prison in northern Israel on Sept. 6. A nationwide manhunt ended on Sunday when Israeli security forces nabbed the remaining two fugitives in the West Bank city of Jenin.