Israel and Hamas finally appear to be making progress on a prisoner exchange deal mediated by Egypt and Mohammed Dahlan. 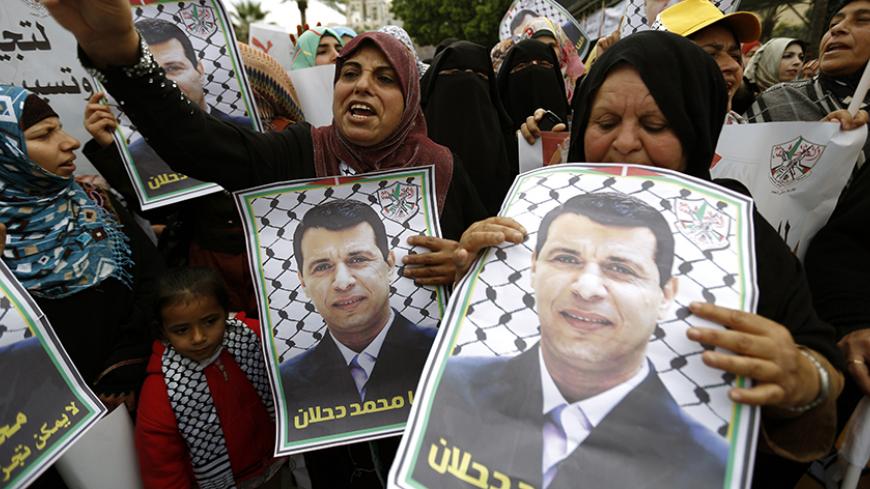 “Israel and Hamas are closer than ever to a deal on the release of the bodies of soldiers Oron Shaul and Hadar Goldin, and Israeli civilians Abera Mengistu and Hisham al-Sayad, but there are still fairly large gaps to be closed,” a source in the Gaza Strip close to former senior Fatah leader Mohammed Dahlan told Al-Monitor on condition of anonymity. According to the source, now that Dahlan has become Gaza and Hamas’ possible savior through his attempts to save the Gaza Strip from total collapse, an Egyptian effort is also underway to seal an overall deal that both Israel and Hamas can accept.

The Izz ad-Din al-Qassam Brigades, Hamas' armed wing, has been holding the bodies of the two soldiers since the war of summer 2014, during which Israel launched Operation Protective Edge into the Gaza Strip. The movement is demanding the release of its members held in Israeli jails, including prisoners previously released in a 2011 deal with Israel for the return of soldier Gilad Shalit who were rearrested following the June 2014 kidnapping and murder of three Israeli youths in the West Bank. The rearrest of the released prisoners was one of the triggers for the bloody armed operation that followed, with Hamas perceiving that Israel had wiped out the most significant achievement it could present to the Palestinian public — freedom for some 1,000 prisoners in return for one Israeli.

Ghazi Hamad, a senior Hamas official in Gaza, told Al-Monitor in the past that the demand by the movement’s senior leadership to free the rearrested prisoners was a precondition for launching negotiations for the soldiers' bodies. He had also mentioned how Israel had violated the important principle of adhering to agreements it signs. Similar messages were conveyed to the international mediators Israel mobilized in the bid to obtain Goldin's and Shaul's remains for burial in Israel. Al-Monitor has learned that a senior Hamas official, Mahmoud a-Zahar, told UN envoy Nikolay Mladenov and his predecessor, Robert Serry, that Israel would have to deposit international guarantees to ensure its compliance with future agreements.

In contacts that began in early July in Cairo through Dahlan’s mediation, Hamas was represented by Rouhi Mushtaha — considered a confidant of Yahya Sinwar, Hamas' leader in Gaza — and senior Izz ad-Din al-Qassam official Marwan Issa — considered the deputy of the armed wing’s leader, Mohammed al-Deif. Both made clear that the release of the rearrested prisoners was not part of the current deal, but a prerequisite for launching talks.

In the past, Israel had rejected Hamas preconditions, but according to the Gaza source, the Egyptians have made it clear that Israel in this case appears willing to consider the release of those inmates within a comprehensive deal and subject to certain restrictions. It is not yet clear what those restrictions are, but some assessments point to a ban on the return of the freed prisoners to Gaza.

In addition to freedom for the Shalit deal inmates, Hamas is demanding the release of hundreds of its people jailed in Israel whose names it had previously passed on to Israel. These include Anwar Saadat, the killer of Israeli Minister Rehavam Ze’evi (2001), as well as dozens of others whom Israel refused to include in the Shalit deal because of the seriousness of the crimes they were accused of committing. According to the source, at no point did Hamas demand the release of Marwan Barghouti, a senior official of the rival Fatah faction and the leading Palestinian prisoner held by Israel.

Despite the Hamas demands, which both Israel and Egypt regard as “unreasonable,” there’s reason to think that significant progress has been made toward a deal. “This is a serious start to negotiations,” said the Gaza source. “What went on over the past three years cannot even be called ‘feelers.’ This time it seems the sides are interested in ending this affair, each for its own reasons and under whatever pressures it is facing.”

Hamas, according to the source, is willing to accept the principle of handing over the bodies and the Israeli civilians in return for prisoners in the framework of an overall deal in which Egypt plays a leading role. This would include a promise to open the Egypt-Gaza crossing at Rafah for the regular passage of people and goods, fuel and raw materials. In other words, this would be a lifting the decadelong Egyptian siege on the Palestinian coastal enclave, a move Israel does not appear to oppose.

Egypt has recently been delivering millions of tons of diesel fuel through the Rafah crossing to restart Gaza’s only power station. Hamas leaders can finally see the light at the end of the tunnel, ironically thanks to Egypt under President Abdel Fattah al-Sisi, who in 2015 declared the armed wing a “terror organization,” and through the mediation of their one-time bitter foe, Dahlan.

Sinwar, himself a former prisoner in Israel, was in charge of all prisoner-related issues for Hamas until he was selected earlier this year to lead the organization in Gaza. After being freed by Israel in the Shalit deal, he put the prisoner issue on the front burner. Israel felt the price he was demanding for the return of the bodies and civilians was unacceptable, a ploy to consolidate his standing within Hamas. “In the meantime, he was elected to lead Gaza and was left holding the mess he had made,” said the source.

Sinwar, said the source, will have to roll back his high-priced demands within the framework of a comprehensive deal with the Egyptians that, as mentioned, will include a significant easing of the blockade. These concessions will help him market the deal as a huge personal achievement.

“The Egyptians are working very hard to build a new ladder according to his measurements that will enable him to get down from the tall tree he climbed,” the Gaza source explained. Nonetheless, he insisted, Hamas' leadership will not bend and will reject any deal that fails to include the release of the Shalit deal inmates.

The Israeli proposal conveyed by peace activist Gershon Baskin to Hamad several months after the end of the 2014 fighting included a “humanitarian release” of prisoners who were ill and old and of several women. Hamas rejected that proposal out of hand. Things appear to have changed. This is the attrition stage during which each side draws its line in the sand, to be followed by the give-and-take that the sides know well from the days of the Shalit deal.