Why third Israeli crossing into Gaza may weaken Hamas' hand

With a second Israeli Bedouin crossing the border into Gaza, Hamas now holds three Israeli citizens, all of them reportedly suffering from mental illness. 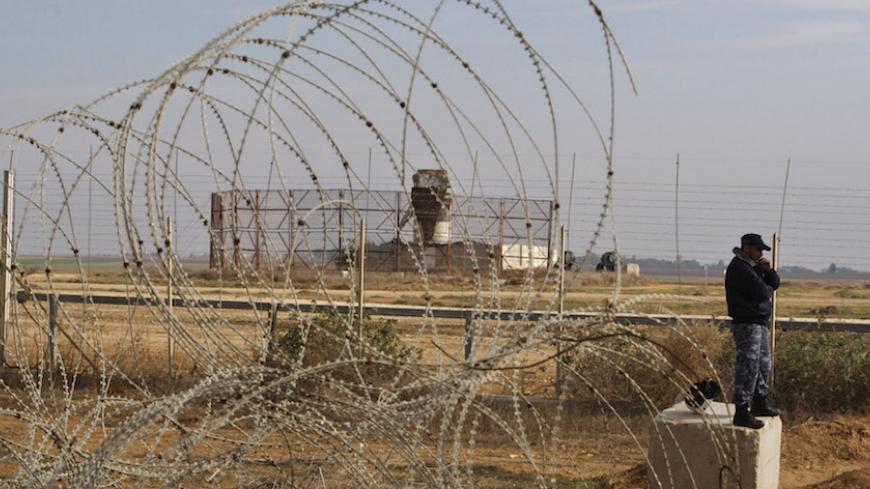 A member of the Hamas security forces stands guard as an Israeli watchtower (rear) is seen near the fence between Israel and the southern Gaza Strip, Nov. 24, 2012. - REUTERS/ Ibraheem Abu Mustafa

About two years ago, two Israeli civilians — Avraham Mengistu, a member of the Ethiopian community, and Hisham al-Sayed, a resident of the Bedouin town of Hura — illegally (and separately) crossed the border into Gaza. On July 12, another Bedouin youth, Jumaa Ibrahim Abu-Ghanima, did the same, making a total of three Israelis being held by Hamas' military wing, the Izz ad-Din al-Qassam Brigades. The group also has the bodies of two Israeli soldiers, Oron Shaul and Hadar Goldin, who were killed in Operation Protective Edge in summer 2014.

Hamas’ military wing generally portrays Mengistu and Sayed as soldiers — with all the accompanying implications — despite their family members' assertions that their sons entered Gaza as a result of being mentally ill. At rallies organized by the Qassam Brigades last July on the first anniversary of Operation Protective Edge, photographs of Mengistu and Sayed were displayed together with those of Shaul and Goldin. In the meantime, Hamas continues to hide two facts from Gazans: that Mengistu and Sayed are mentally ill and that they crossed the border of their own volition.

Family members of Shaul and Golding are conducting a public campaign separate from that of the Mengistu family, but they are united in their efforts to bring their sons home. Members of the three families tried to pressure Prime Minister Benjamin Netanyahu to bind the reconciliation agreement with Turkey to the return of the civilians and the soldiers' bodies. In the end, the agreement signed included a nonbinding statement by Turkish President Recep Tayyip Erdogan that his country would use its intelligence services and influence to try to speed the releases. In response to criticism by the family members, Netanyahu said that Turkey has no control over Hamas and does not hold the soldiers' bodies.

On a visit to Africa, Netanyahu met with Ethiopian Prime Minister Hailemariam Desalegn Boshe on July 7. At the conclusion of the meeting, Netanyahu told reporters that he had asked Ethiopia to help Israel bring Mengistu home. It is clear that Hailemariam has no more influence over Hamas than Erdogan does, thus it is doubtful whether he can actually help.

According to the messages delivered to Hamas by foreign emissaries and mediators, Israel has separated its negotiations for the return of Shaul and Goldin's bodies from talks for the release of Mengistu and Sayed. It, however, avoids stating this publicly.

A source connected to the Mengistu family told Al-Monitor that a Swiss emissary who had held secret contacts with Hamas had told the family that they had heard the following from movement leaders in Gaza: that Hamas insists on guidelines similar to the “bodies in exchange for prisoners” agreement with Hezbollah in January 2004. In that exchange, Israel agreed to release 400 Palestinian prisoners (and 36 additional detainees) from its jails in return for the bodies of soldiers abducted from the Dov mountain range, Benny Avraham, Omar Sawaid and Adi Avitan. The transaction also included the release of Elhanan Tennenbaum, a civilian who had been involved in drug smuggling.

Al-Monitor reported July 5 that the contacts for a deal with Hamas have not yet matured to the point of bona fide negotiations. This is because of the way Yahya Sinwar, the member of the military wing managing the prisoner exchange portfolio, is using his position to leverage his status and power within the organization. Sinwar has set completely unacceptable conditions, as far as Israel is concerned, for the release of the bodies and the civilians.

Sources in Israel involved in the contacts with Hamas believe they know the main reason an agreement is not on the horizon: Sinwar and other military leaders portray Mengistu and Sayed as soldiers caught during armed conflict, thus they demand a large number of prisoners in exchange, similar to the 2011 Gilad Shalit deal, in which 1,027 prisoners were released in exchange for Shalit.

Israel had sent messages to Hamas through all possible channels — including via Ghazi Hamad, who had conducted the negotiations for the Shalit release — to inform its leaders that it does not place mentally ill civilians in the same category as soldiers. Hamas responded with total scorn.

“It is a mistake to think that Hamas can raise the price it demands after a third civilian is held captive,” a defense source told Al-Monitor, speaking on condition of anonymity. According to the source, Abu-Ghanima’s entering Gaza weakens the “bargaining card” that Hamas thinks it has. “Now they won’t be able to deny the fact that they are holding hostage civilians who crossed the border of their own volition,” he said. The Israel Defense Forces immediately allowed the release of Abu-Ghanima's name to the press, in contrast to its handling of the Mengistu and Sayed cases, so Abu-Ghanima’s capture by Hamas would be reported via Arab media outlets.

According to the security source, Israel erred two years ago when it imposed a blackout on the news that two civilians had voluntarily crossed the border. The blackout gave Hamas an opportunity for manipulation, portraying the civilians as soldiers who had been taken prisoner. That they crossed the border into Gaza soon after the conclusion of Operation Protective Edge helped Hamas distort the facts and claim that the two youths had been taken prisoner in battle.

Following the reports by Arab media outlets, no one in Gaza should believe that the Bedouin youth who crossed the border is a soldier. In addition, the Arab news agencies and Al-Arabiya and Al Jazeera extensively reported on the incident as told by the Abu-Ghanima family, who said that Jumaa Ibrahim is mentally ill, like the other two civilians who are already held by Hamas.

As noted, the Israelis think that Hamas will find it difficult to pass off the three civilians they are holding as soldiers and that public opinion in Gaza will dismiss its declarations that it intends to release them for thousands of prisoners.

Nevertheless, there is not much optimism among Israel’s security establishment. It is assumed that Hamas as it currently stands will not agree to release the three civilians without receiving something in return. The Qassam Brigades will find it hard to admit that they no longer have a strong bargaining chip.