Why Hamas needs a prisoner-swap deal with Israel

Hamas seems to believe the only way to battle the frustration of Gaza residents over their desperate economic situation and corrupt leadership is to announce another prisoner exchange. 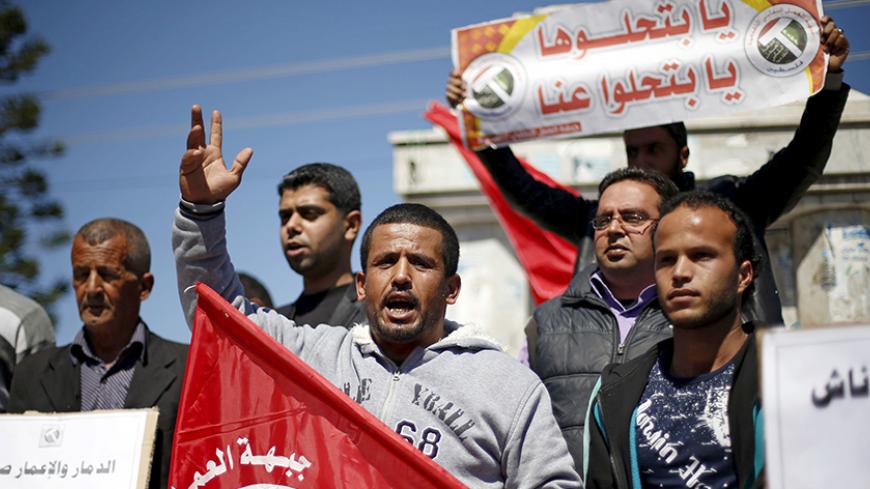 Palestinians hold flags and signs as they take part in a protest calling for better living conditions for the people of Gaza, in Gaza City, April 2, 2016. - REUTERS/Suhaib Salem

What motivated the speaker of Hamas' military arm on April 1, when he showed photographs of four Israelis — two soldiers killed in Operation Protective Edge and two civilians currently held prisoner by Hamas — on TV? Hamas ostensibly wanted to deny that it was engaged in negotiations over the fate of two bodies and two civilian hostages. In fact, the situation is far more complex.

Today, Hamas still has the bodies of Israeli soldiers Hadar Goldin and Oron Shaul. It also holds two civilians who crossed the border from Israel into Gaza: Avraham Mengistu and Hisham al-Sayyad, a resident of the Bedouin settlement of Hura. At the request of his family, the media was banned from releasing the young Bedouin's name. Once Hamas showed his name and photo on air, however, his father spoke out, saying that his son is mentally ill and in need of treatment.

For the longest time, Hamas denied possession of Mengistu or Sayyad, apparently in an attempt to get Israel to pay for information about their whereabouts. In response, Israel made it clear that it had no intention of paying an excessive price for the bodies of two soldiers and for the two civilians who crossed the border on their own volition. Hamas blinked first, admitting that it had the two civilians and that it wanted to move forward with a prisoner exchange.

At first, messages between Israel and Hamas were relayed via Ghazi Hamad and Gershon Baskin, the two men who helped secure the release of Israeli soldier Gilad Shalit, as well as other channels, including emissaries from the European Union and Egypt. Netanyahu himself raised the issue with the German chancellor, and it was discussed last month when the Hamas delegation visited Egypt. Al-Monitor has learned that the members of the delegation, headed by Mahmoud az-Zahar, demanded the release of hundreds of prisoners currently held in Israeli jails. Israel responded that it would only be willing to release prisoners in humanitarian cases, such as ailing or elderly prisoners who have served most of their sentences and are not considered to have blood on their hands.

It now seems as though the timing of Hamas denying the negotiations could be linked to the Hamas delegation’s return from its unsuccessful trip to Egypt. It now realizes that it will not get the kind of deal it was hoping to reach.

Hamas and Israel have been exchanging messages for a year now without any progress. Over the year, Hamas' situation has only gotten worse. The problem is bigger than the dire economic conditions in the Gaza Strip and the deteriorating relationship between Hamas and Egypt. It also involves an overwhelming feeling among the Hamas leadership that the people in Gaza are simply fed up with their rule.

Obviously, no expression of the wide frustration and sharp criticism of the Hamas regime can be found in the Palestinian media. It can scarcely be found in social media, either. Ever since Hamas' military arm, Izz ad-Din al-Qassam Brigades, seized power in the military coup of 2007, the region has been ruled by intimidation. Anyone who dares to criticize Hamas faces arrest and torture. Young people who attempt to organize protests in Gaza are visited by al-Qassam Brigades, who beat the daylights out of them. The lesson has been learned. Today, there is probably not a single young person in Gaza who would dare to demonstrate against Hamas.

On the other hand, young people living in the Gaza Strip speak among themselves about the miserable situation. In private conversations, they share with one another how frustrated they are with Hamas and how they have lost hope in general. Though Hamas once promised them change and reform, the movement actually caused the situation in Gaza to deteriorate further. Young people in Gaza who do send messages to their peers in the West Bank over the social networks use codes and allusions, so that only “insiders” will be able to read their criticism.

“Even that’s dangerous,” a young man from Khan Yunis told Al-Monitor on condition of anonymity. “The opinion on the street has not been with Hamas for a very long time now, and it is not just because of the situation in the Gaza Strip and us being separated from our brothers and sisters in the West Bank. It is that gradually, all of us, young and old alike, came to the realization that they established a corrupt government that only cares for itself. If there were elections in Gaza now, they would suffer a crushing defeat.”

According to him, this is the reason Hamas will never hold elections in Gaza. It also explains why it will never reconcile with Fatah.

The consequence of all this is that Hamas believes the only way for it to bring good news to the people of the Gaza Strip is to announce another prisoner exchange with Israel. Such a deal would give al-Qassam Brigades and the Hamas leadership cause for celebration, even if there is no real reason to party. They believe that to advance a deal, al-Qassam Brigades must manipulate the Israeli public yet again. From there it is a short distance to showing photos of the Israelis held by Hamas on television. It should also be noted that the Hamas announcement did not mention that the soldiers were dead, creating the illusion that they were alive.

Until recently, the spokesman of the Izz ad-Din al-Qassam Brigades even maintained a Hebrew-language Twitter account, which he used to update his followers about the situation of the “hostages.” These messages were intended to pressure the Israeli public, which so far has responded with apathy to the possibility of a deal with Hamas. It certainly would not have the widespread support that gripped Israel over Shalit’s release.

Hamas may once have had deep roots among the people, but it is now completely cut off from the residents of the Gaza Strip. Power, it seems, has corrupted even it.