A Palestinian source has claimed that in recent messages between Israel and Hamas over the communication channel established for the Gilad Shalit exchange, Hamas has admitted to holding Israeli civilian Avraham Mengistu. 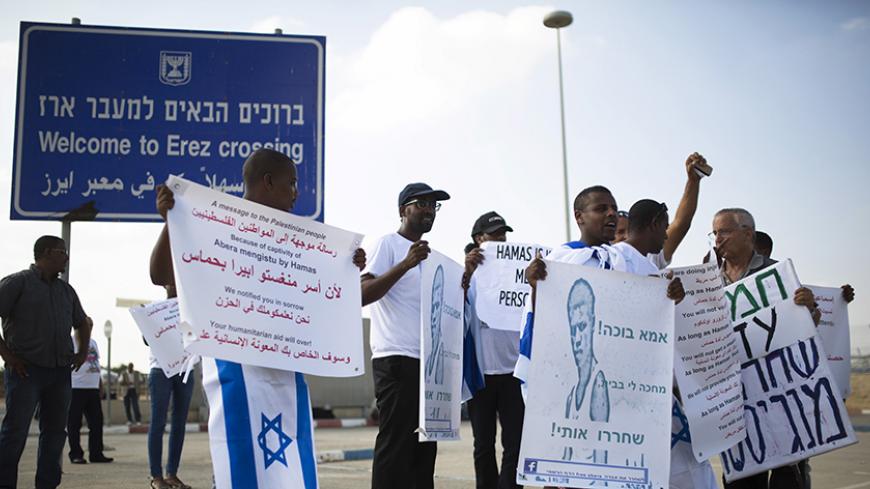 Demonstrators hold placards during a protest calling for the release of Avraham Mengistu at the Erez crossing in southern Israel, near the Gaza Strip, Aug. 27, 2015. - REUTERS/Amir Cohen

The family of Avraham Mengistu, an Israeli citizen being held in Gaza, demonstrated at the Erez crossing point on Aug. 27, protesting Hamas having held Mengistu for a year now. This was the second public protest initiated by the family this month. Their goal is to put the plight of their son on the national agenda and to compel the government to launch a diplomatic effort to bring about his release.

On Aug. 17, the family and assorted volunteers demonstrated beside Hadarim Prison in the Sharon region, while the families of Palestinian prisoners visited their incarcerated relatives. The Mengistu family and its supporters were trying to send flyers into Gaza reading that their son is emotionally unstable and should be released for humanitarian reasons. But while this demonstration officially targeted the families of Palestinian prisoners, it was actually directed at Israeli decision-makers. Having seen the public campaign for the release of abducted soldier Gilad Shalit, the members of the Mengistu family apparently estimate that if they fail to win widespread public support for their cause, the country’s decision-makers will be in no rush to enter into negotiations with Hamas that would lead to another release of Palestinian prisoners.

Dozens of Israelis joined the demonstration at the Erez crossing. Most of them were social activists, trying to make Mengistu’s captivity a topic of daily discourse. Avraham's brother Ilan spoke with Palestinians who happened to be at the border crossing and asked them to pressure Hamas to release his brother.

Al-Monitor has learned from a senior Palestinian source, speaking on condition of anonymity, that an active channel for relaying messages between Hamas and Israel has been operating for the past few weeks. It is the same channel that was used when Israeli soldier Gilad Shalit was held prisoner. In the most recent messages, Hamas has admitted for the first time that it is holding Mengistu and a Bedouin civilian whose name has been banned from publication by the Israeli authorities.

This is an important development. Ever since the situation was first made public July 9, Hamas has claimed publicly that it is not holding these two Israeli citizens. While Hamas did admit that Mengistu had been interrogated, the group also said that he was released and that it has no idea what happened to him since then, though they supposed he might have crossed the border into Egypt. Some in the security establishment have raised the possibility that Mengistu is no longer alive, which would explain why Hamas would want to exonerate itself from any responsibility.

After admitting in an interview in Doha this July that Hamas is in contact with Israel over a potential long-term cease-fire, the head of the organization’s political bureau, Khaled Meshaal, refused to confirm that the group was holding the two Israelis.

According to the Palestinian source, based on the most recent messages relayed to Israel via this clandestine channel, however, Hamas suspects (or at least claims to suspect, so as to increase the number of prisoners that Israel would be forced to release in any future prisoner exchange) that Mengistu is not emotionally disturbed, and that he was sent on an espionage mission. One explanation they gave for this assertion was that Mengistu was observed by Hamas scouts for half an hour, roaming along the Zikim border crossing between Gaza and Israel, but no Israeli forces intervened. How is it possible, they asked, that anyone who even approached the Zikim border crossing in the past was arrested immediately, whereas Mengistu was given license to roam freely there?

According to the source, Israel relayed medical documentation to Hamas showing that Mengistu, a civilian, suffers from mental illness and needs medical treatment, but his captors did not find the documents convincing.

Hamas sent Israel a message saying that it would be prepared to enter into negotiations over the release of the two Israelis and the return of the bodies of two soldiers, Oron Shaul and Hadar Goldin. First, however, Israel would have to release all the prisoners first released in the Shalit deal who were arrested again after the three Israeli boys were abducted and murdered June 12, 2014. In other words, Hamas is making the negotiations dependent on the unconditional and retroactive release of prisoners who were first released in the Shalit deal. Furthermore, their release would in no way be considered a gesture or price paid toward the completion of any future deal. As of now, Israel has rejected this demand, but the very fact that Hamas has admitted to holding Mengistu and the Bedouin civilian is a positive development that allows for future dialogue.

The Palestinian source told Al-Monitor that for now, Hamas has no interest in any deal with Israel that would lead to the release of the two civilians and the return of the soldiers’ bodies. The source claimed that the organization is in crisis. Its members know that Israel will refuse to pay a steep price for the bodies of its soldiers and its imprisoned civilians. It is more likely, Hamas believes, that Israel would insist that there would be no or at most very minimal compensation for their release. The source added that Hamas has created the false impression among the Palestinian public, particularly in the Gaza Strip, that it is holding an Israeli soldier captive. The group uses this belief to imply that they will be able to get a significant number of prisoners released in exchange for the soldier, just as they did in the Shalit exchange.

On July 8, members of the Izz ad-Din al-Qassam military wing of Hamas held a military gathering at which they displayed mock-ups of military dog tags from the two missing soldiers. They also showed a third dog tag with a question mark on it, hinting at a third Israeli soldier that they were holding.

In fact, activists from Izz ad-Din al-Qassam Brigades have been investing considerable efforts recently in using various propaganda tools to convince the Palestinian public that they have improved their military capacities since Operation Protective Edge and that they are ready for another conflict with Israel.

On Aug. 27, Izz ad-Din al-Qassam released a very polished video showing its terrorist tunnel assault unit in action. The clip, which was posted online to mark the one-year anniversary of Operation Protective Edge, was intended to prove to the Palestinian public that despite the dire economic conditions in the Gaza Strip, any talk of the organization being weakened is incorrect. Its members say that Hamas is enjoying an upward momentum, while its leaders are promising the people of Gaza that they will not abandon the fight until the siege of Gaza is finally lifted.

Nevertheless, based on all the information that has reached Al-Monitor, it seems that even after Hamas admitted to holding the two Israelis, there is still a long way to go before they are released.