Public acknowledgment that an Israeli man is allegedly being held in Gaza has complicated negotiations between Israel and Hamas for his return, along with the remains of two IDF soldiers, in exchange for Hamas prisoners in Israeli jails. 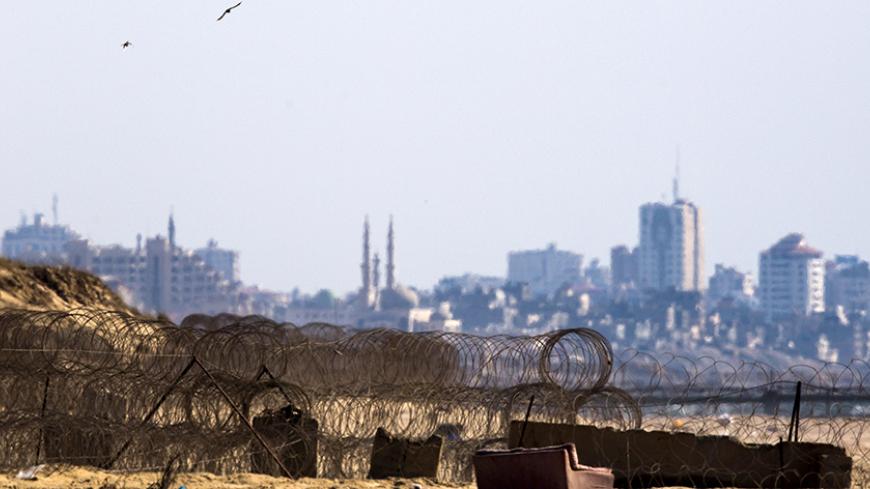 Barbed wire is seen on Zikim beach in Israel near the border with northern Gaza, July 9, 2015. Two Israeli citizens are being held by Hamas in the Gaza Strip, a situation that could lead to demands for a prisoner exchange between Israel and the Islamist militant group. - REUTERS/Amir Cohen

It’s no coincidence that the disappearance in Gaza of a young Israeli man named Avraham Mengistu has only now been made public. Mengistu, a 29-year-old in all likelihood suffering from mental illness, climbed the border fence near the Zikim kibbutz Sept. 7, 2014, and has since been considered missing. On July 9, a gag order was lifted on the disappearance of another Israeli, a Bedouin man who crossed the border into Gaza as well. Israeli authorities are treating the two cases quite differently. Mengistu was captured by Hamas shortly after entering Gaza, whereas the other Israeli had crossed the border several times in the past and is thought to be living in Gaza, with a family and with Hamas' consent, and is not therefore considered any sort of potential bargaining chip.

Israel kept a lid on Mengistu’s crossing into Gaza, assuming that as long as Hamas did not publicly declare that it held him, an exchange could be quietly negotiated for his return along with the remains of Lt. Hadar Goldin and Sgt. Oron Shaul, two Israel Defense Forces (IDF) soldiers killed during last summer’s Operation Protective Edge.

The only hint that Hamas has conveyed in recent days, to its followers and to Israel, was during a July 8 rally by its military wing the Izz ad-Din al-Qassam Brigade, marking the one-year anniversary of last summer's war. In addition to a display of weaponry — including two rockets, which Hamas claims to have recently developed — three IDF dog tags were exhibited. One of them bears Shaul's name, but the two others had no names inscribed. This is a clear sign that the organization holds three bargaining chips in its hands.

Significant progress on a deal was reportedly made through contacts between Israel and Hamas using European intermediaries and involvement by the Red Cross. According to Hamas sources, the deal was expected to have been completed around Eid al-Fitr, the feast culminating the month-long Ramadan fast that this year falls between July 18 and 20. A senior Hamas official is quoted as saying that Israel was supposed to release several prisoners, probably a few dozen, during the holiday and in return, Hamas would give Israel the two soldiers' remains. The progress to which the source referred was based on an understanding the sides had reached on the number of prisoners.

Israel usually frees Palestinian prisoners every year around Eid al-Fitr as a goodwill gesture. These are prisoners who have all but finished serving their terms and are not considered security threats. The release of prisoners, including the several dozen that Hamas is demanding in return for Goldin and Shaul's remains, could be perceived as a victory for Hamas, which is why Israel has tried to time the conclusion of the deal around the Eid.

According to the Hamas source, those to be freed include inmates whom Israel freed in 2011 in return for the abducted IDF soldier Gilad Shalit, but then rearrested last summer after the kidnapping and murder of Israeli youths Gil-Ad Shaer, Naftali Frenkel and Eyal Yifrah on June 12, 2014. There has been no Israeli confirmation of this claim.

Israel was hoping until the very last moment that the media blackout surrounding Mengistu would help the two sides complete a deal by Eid al-Fitr without additional obstacles. In recent weeks, however, Hamas has been insisting that it is not holding Mengistu and that it knows nothing about his whereabouts, even when it seemed like they were on the verge of a breakthrough on a deal.

Israel was concerned that Hamas was therefore planning to pull out Mengistu as a new bargaining chip after the completion of the Eid deal, demanding in return for him the release of more prisoners and in larger numbers than those exchanged for Goldin and Shaul's remains.

The gag order was only lifted when Hamas began to insist that it does not have Mengistu. Israel saw no point in keeping his disappearance under wraps any longer, and it also wanted to throw the ball into Hamas’ court. Israel is signaling to Hamas' leadership that it must now make a decision. With less than two weeks before Eid al-Fitr, they must decide whether they want a deal including Mengistu, which would be fine, or if not, put on hold all the understandings and agreements regarding a prisoner release.

Israel is operating on the assumption that given the movement’s dire straits, it needs immediate, tangible accomplishments to show the people of Gaza. Last week, former Hamas Prime Minister Ismail Haniyeh promised Gaza residents that unlike the previous Ramadan last summer, during which war raged, life would be easier this Ramadan and that they would soon see improvements. Now it seems, his words were premature, and his promises apparently false.

As we know, a deal for a long-term truce between Israel and Hamas has not materialized, and a deal for the release of prisoners and the return of the soldiers' remains will apparently not happen. Thus, Hamas is back at square one. It has no tangible accomplishment to parade in front of Gazans.

“Unfortunately, the story has come out,” Prime Minister Benjamin Netanyahu told Mengistu’s family in a phone call initiated by Yair Lotan, the government’s point man on Israeli hostages and the missing. “This will make it easier for Hamas to up the ante,” the prime minister added, “and we have no interest [in this happening] given that under different circumstances we had hoped that we might be able to bring about an early release without publicity.”

With the affair now public, the rules of the game have changed. Judging from past experience, both sides will now stake out tougher positions.

In Gaza and the West Bank, pressure will be brought to bear on Hamas by Palestinian families demanding the release of a large number of prisoners in return for a living Israeli hostage. In Israel, the public will pressure the government to impose stricter controls over Gaza until Mengistu is returned to his family. This could result in the suspension of Israel's recent easing of the Gaza blockade.

From now on, further moves and the price of any deal will be dictated, it seems, by public opinion.