Israel slow to rescue captured citizen. Is it because of his race?

Israeli politicians were quick to turn the affair of Avera Mengistu's release from Gaza into an issue of government discrimination against the Ethiopian-Israeli community. 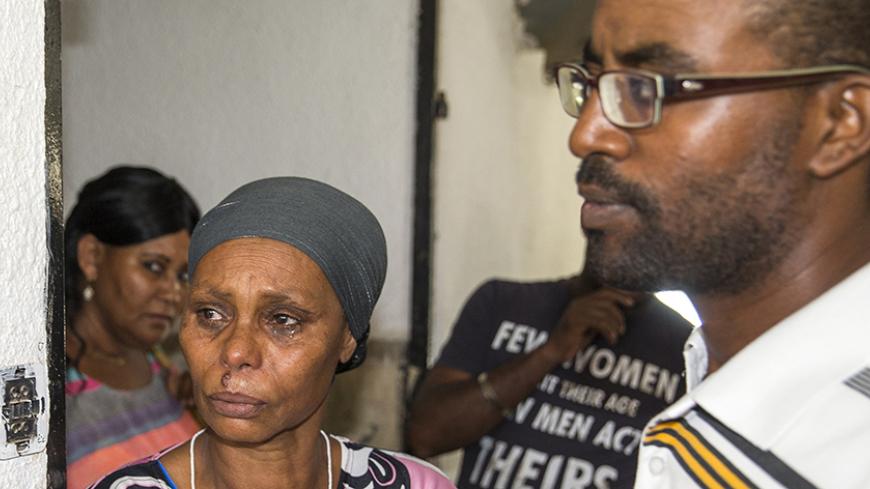 The brother and mother of Avera Mengistu, an Israeli of Ethiopian descent who's reportedly held captive in the Gaza Strip, stand during a news conference in Ashkelon, July 9, 2015. - Getty Images/Jack Guez

“The family is interested in keeping a low profile, and sent an unequivocal message not to turn their son into part of the social struggle of the Ethiopians. As it is, things have gotten out hand,” a source close to the Mengistu family, whose son Avera is allegedly held in the Gaza Strip, told Al-Monitor. In recent months, this source has helped the family in their efforts to work with government agencies to bring about the release of Avera, an Ethiopian-Israeli youth who has a mental disability and who crossed the border into Gaza of his own accord 10 months ago.

The story of his disappearance has been kept from the public, and has even been hidden from the restrained ministerial forum — the diplomatic-security Cabinet — by means of a comprehensive gag order.

Since the lifting of the gag order July 9 at the media's request, politicians and journalists have described Mengistu’s Ethiopian background as the main reason that the state kept his disappearance a secret. Reasoned op-ed columns explained why the color of the youth’s skin was what caused Prime Minister Benjamin Netanyahu not to do enough to secure his freedom. In the print version of the Israeli daily Yedioth Ahronoth, for example, Mengistu was called “The Invisible Captive” in a huge headline. Eitan Haber, an analyst at the paper, said that “if he were called Rabinowitz [of European origin],” the story would have been different.

The proximity between the publication of Mengistu’s disappearance and the justified protest of the Ethiopian community against the establishment, which broke out about two months ago in Tel Aviv, made the association between these two stories too easy, even inevitable. Ethiopian-Israeli activists have been protesting against long-standing neglect and discrimination by the authorities. Some of them tried to use the Mengistu case as proof of this neglect by the establishment.

Without putting much thought into it, and without considering the special circumstances of the youth’s disappearance, the media and social networks have fanned the flames in a patently disproportional manner, while turning this episode into a story of discrimination and racism.

What has contributed to this atmosphere was of course the recording where Lior Lotan, the prime minister’s representative for issues of hostages, was heard speaking with the family in a threatening and condescending tone. Lotan told them, in a meeting that took place after the publication of the affair, that their son's release would be delayed if they express criticism of the prime minister, and demanded that they not connect the event to the Ethiopians’ protest. “I’m going to tell you this in the toughest way possible: Whoever puts on Avera the story of what’s between the Ethiopians and the State of Israel will leave him in Gaza for another year,” Lotan said.

The fact that the Mengistu family mother and father hardly speak Hebrew, that they live in poverty and that they can’t fight on their own for the release of their son have helped make the recorded conversation into socially radioactive material at the hands of the media, and later all the more so on social media.

Lotan, a much-praised officer during his military service, has suddenly turned into the enemy of the people. He was vilified and put to the stake in innumerable comments on Facebook, and politicians have called on the prime minister to dismiss him.

There is no doubt that Lotan’s words were patronizing and insensitive, but it's not much to go on to convict someone of racism. Unfortunately, in the heat of the moment, opposition politicians rushed to determine fates and further incite the charged atmosphere.

On July 10, Lotan accompanied Netanyahu to the family’s home in Ashkelon and apologized to the family and the media. The family also felt that things got out of hand. In the last 10 months, Lotan has visited their home at least six times and the relationship between them was good overall. According to the source close to the family, Lotan treated them with compassion and patience.

The government made many mistakes in this case, the worst of which was keeping it from the members of the diplomatic-security Cabinet and from the Knesset Foreign Affairs and Security Committee. But the claim that the youth was abandoned because of his background, especially as hinted at by politicians, is populistic rabble-rousing. The sad truth is that the government representatives’ harsh treatment of families of the missing and kidnapped isn’t new, and isn’t reserved for Ethiopians.

Noam Shalit, the father of Gilad Shalit, the Israeli soldier who was abducted by Hamas in June 2006 and released five years later as part of a prisoner exchange, told Channel 2 July 10: “We also met with humiliating and insulting treatment and we are not Ethiopians … We also were given the sense that if we would have made noise this could have hurt the release of our son.”

Pirhiya Hyman, the sister of Yehuda Katz, one of the soldiers missing in action from the battle at Sultan Yacoub during the 1982 Lebanon War, said similar things in an interview July 10 on Israeli radio station Reshet Bet: “For five years we remained quiet and were forbidden from talking. We’re not Ethiopian, and Lior Lotan and the government and the person heading it didn’t treat our soldiers differently.”

Over the years, the State of Israel has been forced again and again to deal with the question of releasing terrorists in exchange for captive soldiers or the bodies of soldiers. In one instance, Israel paid a heavy price to return a captive civilian, Elhanan Tennenbaum, in a controversial deal with Hezbollah. Over 400 terrorists were released in exchange for Tennenbaum's return. Tennenbaum himself admitted later to the court that he was involved in drug deals that presumably led to his kidnapping. But it seems that only with the Gilad Shalit deal in 2011 did the public feel that the government lost the ability to make rational decisions in the face of pressure by the family of one soldier. More and more individuals in Israeli society understood that this soft underbelly would cause terror organizations to focus on attempts to capture soldiers.

It was for this reason that a committee was established, headed by former president of the Supreme Court, Meir Shamgar, to try to delineate guidelines for the government for future negotiations for the release of prisoners. In 2012, its conclusions were presented, which outlined four levels of the government’s commitment to its citizens in declining order of importance: a soldier captured in active duty; an Israeli captured in an act of terrorism; an Israeli who accidentally crossed the border and was captured; and an Israeli who crossed the border of his own accord. In this instance, according to the recommendations, the state does not need to release terrorists in exchange for Mengistu's return. His case fits apparently the last category. This is also the case of a Bedouin citizen with a mental disability, who has also been missing in Gaza for several months and whose identity is forbidden to be publicized by a court order.

In the atmosphere that has been created, where the episode has been painted in the colors of an emotional ethnic struggle and Mengistu has become a symbol of discrimination, the prime minister will find it difficult to act according to the recommendations of the committee that was supposed to resolve Israel’s weakness in these kinds of situations.