The truth about Gilad Shalit's five years in captivity

A video released by Hamas appears to show that abducted Israeli soldier Gilad Shalit was kept in humane conditions, yet questions remain about the motive behind the decision to release the clip. 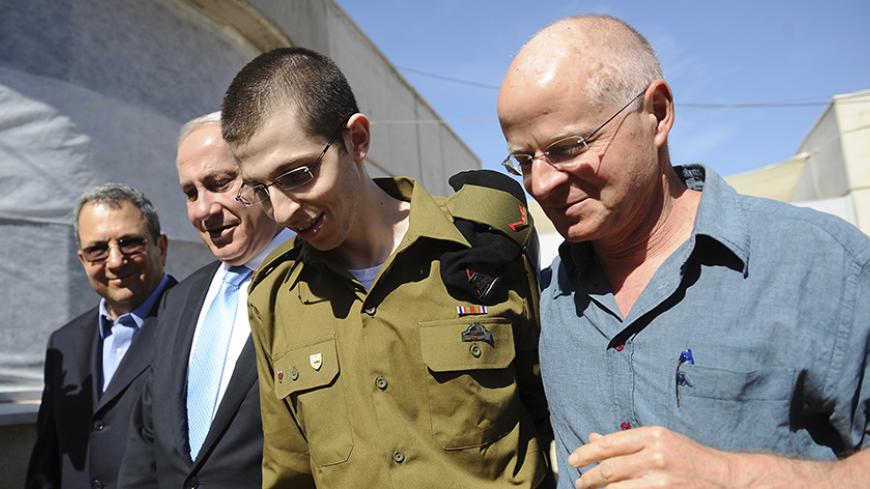 After 5½ years in captivity, Israeli soldier Gilad Shalit was released on Oct. 18, 2011, in a controversial prisoner exchange deal. Prime Minister Benjamin Netanyahu gave the green light for the release of Palestinian prisoners previous governments had refused to let go, deviating from and breaching the security-political-ideological principles he has preached throughout his entire political career. The campaign waged by the Shalit family won over the majority of the Israeli public, ultimately prompting the political and defense establishments to accept most of Hamas’ terms.

The whole country watched with bated breath as Shalit walked on camera into the Rafah crossing escorted by his captors, including Ahmed Jabari, the commander of Hamas’ military wing, the Izz ad-Din al-Qassam Brigades.

What did the Israeli public know about Shalit’s captivity and the conditions under which he was held? Nothing. Even after his release, the defense establishment forbade him from disclosing any information about the conditions of his captivity.

During Shalit’s confinement, Hamas released one audiotape in June 2007 and one videotape in October 2009. Its objective was to apply pressure on the Israeli public as well as to meet Israel’s condition of proof of Shalit's life before agreeing to discuss any deal with the organization.

“I started getting used to having my photos taken. I knew it might help,” Shalit told Channel 10 in an interview one year after his release. “It made me feel that something was going on, but I also knew there were high chances that nothing would happen.”

In early January, just over four years after Shalit’s release, Hamas unveiled footage from his captivity. In both the video clip and the still photos, Shalit is seen with his captors. His life looks entirely different from what the public had envisioned of an underground Hamas cell in Gaza.

By going through with the Shalit deal, Hamas was able to twist Israel’s arm, scoring many points with the Palestinian public and in its internal struggle against its rival, the Fatah movement. It is for this reason that Hamas in general, and the military wing in particular, relish this impressive past achievement. It is well-known that the movement is now experiencing one of its lowest points since its foundation. Its leaders are finding it hard to provide for the residents of the Gaza Strip. The military wing, which used to brag incessantly about its military achievements, also finds it hard to boost morale among the frustrated and despairing Gazans.

And although photos of past achievements won’t really change the status of Gaza’s residents, the leaders of the military wing believe that a brief moment of boosted morale could do no harm.

Hamas is currently holding other Israelis captive: civilian Avraham Mengistu and a young Bedouin from the south whose name is being withheld by the Israeli authorities, as well as the bodies of Israeli soldiers Hadar Goldin and Oron Shaul — may they rest in peace — who fell during Operation Protective Edge in the summer of 2014. Despite the claim by some in Israel that the recent release of Shalit’s photos was timed to pressure the Israeli government through the Shaul, Goldin and Mengistu families, it is highly doubtful whether these photos will help the families. Clearly, even Hamas knows full well that what was relevant with regard to Shalit — a soldier who was kidnapped and taken to Gaza — is irrelevant to two civilians who crossed the border to Gaza on their own accord and the bodies of the two soldiers.

But even if the release of Shalit’s photos is designed for propaganda purposes, it still raises two important issues. The first relates to Hamas’ captivity conditions of which the Israeli public has never been exposed, and the second relates to the failure of Israel’s powerful intelligence agencies to obtain information about the place or places where Shalit was held captive for 5½ years.

Undoubtedly, Shalit had a rough time in captivity. On the other hand, it is now clear from Hamas’ footage as well as from Shalit’s debriefing by the Shin Bet after his release that he was not kept in a dark cellar below ground without ever seeing the light of day.

In 2008, Israeli journalist Sulaiman al-Shafi published “The Captive: A Look from Gaza,” which described Shalit’s great suffering during his captivity. My colleague Ben Caspit painted another, diametrically opposed picture based on the minutes of Shalit’s debriefing by Shin Bet interrogators after his release.

“Shalit,” Caspit wrote, “was not kept in a cellar. He was hardly tortured except for some badgering in the first few days. … He watched television, listened to the radio and even occasionally surfed the Internet. … He watched all the 2010 World Cup matches. … Naturally he was down and depressed, which affected his appetite, causing a drastic weight loss. He did not go on a hunger strike, nor did he contemplate doing so. One day he ate on the rooftop together with the host family in Khan Yunis, from where he could see the ocean. Under any other circumstances, he might well have felt like he was on vacation.”

Indeed, in the photos that were just released, Shalit is seen “joking” with his captors and sipping coffee with them on different occasions, all smiles. He is even seen at a barbecue with his captors outside the hideout where he was held. Clearly, he was kept above ground rather than in a dark cellar. The Palestinian narrator in the footage even emphasizes that Shalit received fair and humane treatment from Izz ad-Din al-Qassam Brigades in accordance with the rules of Islam pertaining to prisoners of war.

In response to the release of Shalit’s captivity photos, the Shalit family issued a press release saying, “The scoundrels — the captors of the soldier — will stop at nothing in order to present a distorted picture that in no way reflects 5½ years of captivity, loneliness and daily fear for survival.”

But this video is supported by Shalit’s own testimony after his release, which clearly suggests that he was kept under reasonable conditions. This information should not change Israel’s defense policy vis-a-vis Hamas and not relieve the organization of its murderous character throughout its years of struggle against Israel.

Most Israelis view the Hamas movement as a murderous terrorist organization consisting of cruel, bloodthirsty militants. But in all fairness, and however hard it is to paint the bitter enemy in humane colors, it behooves us to know the truth as well.