Is Hamas honing its negotiating tactics with Israel?

What are the possible motives behind Hamas’ recent revelation of a secret unit that handles captured Israeli soldiers and its release of details about freed prisoner Gilad Shalit's incarceration? 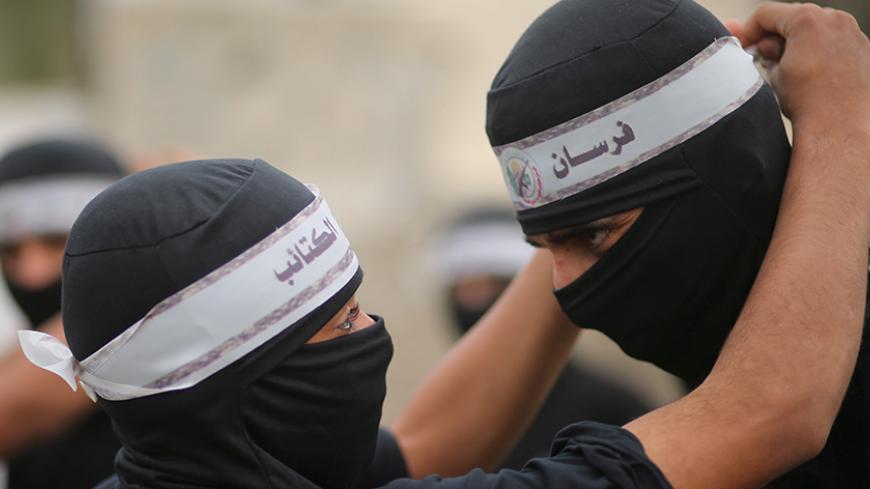 A young Palestinian loyal to Hamas adjusts the headband of his comrade during a rally in Khan Yunis in the southern Gaza Strip, Jan. 7, 2016. The Hamas rally was held to honor the families of dead Hamas militants, who Hamas' military wing said participated in imprisoning Israeli soldier Gilad Shalit. - REUTERS/Mohammed Salem

RAMALLAH, West Bank — Hamas’ military wing has published for the first time information and images about the operation that captured Israeli soldier Gilad Shalit on June 25, 2006. The publication also includes information about his detention, which extended until Oct. 18, 2011, when he was released in the first phase of a prisoner exchange known as the Shalit deal.

Izz ad-Din al-Qassam Brigades released the information between Dec. 29 and Jan. 4, announcing the names of five of its now-dead members who participated in Shalit’s detention. The announcement included a brief introduction about each of the members, including previously unreleased photos of them with Shalit.

The group also released a video about its Shadow Unit, which al-Qassam Brigades established 10 years ago. The brigades described this group as one of its most secret units, tasked with securing the Israeli prisoners captured by al-Qassam Brigades and keeping them hidden to frustrate Israel’s efforts to recover them.

The unit was revealed after the last member of the group, Abdul Rahman al-Mubasher, died Dec. 28 when a resistance tunnel he was working in collapsed. Sami al-Hamaide, another member of the unit, died in 2008, and member Abdullah Labad died in 2011 along with his brother. As for Khaled Abu Bakra, he died in a tunnel in 2013, accompanied by the fifth member, Mohammad Daoud.

The video was broadcast on Hamas’ Al-Aqsa channel and showed some details on how Shalit lived with his captors. In one scene, he was shown watching television; in another, dining with his captors, one of whom was offering him a beverage. In another scene, Shalit was shown participating in a barbecue with members of al-Qassam Brigades.

Hamas spokesman and MP Mushir al-Masri told Al-Monitor that al-Qassam Brigades wanted to show through the video that “the Palestinian security mentality is innovative in the face of the Israeli security mentality and can defeat it.”

Military expert and retired Maj. Gen. Wasif Erekat told Al-Monitor that al-Qassam’s video showed “the brigade’s strength in holding Shalit for years in detention, the weakness of Israeli security forces and intelligence services, and [al-Qassam Brigades’] victory in the psychological war against the Israeli public.”

Al-Qassam Brigades also might be trying to push Israeli Prime Minister Benjamin Netanyahu’s government to proceed with a new prisoner exchange. On Dec. 3, al-Majd al-Amni website, which is close to al-Qassam Brigades, published a supposed message from captured Israeli soldier Oron Shaul to his mother, asking her to “pressure [Netanyahu’s] government and to not believe his false foot dragging.”

The message prompted Shaul’s family to hold a press conference Dec. 13 in which the soldier’s mother, Zahava Shaul, accused the Israeli army of not doing enough to bring back her son. He was lost during his participation in the latest Gaza war in 2014. She called on Hamas leader Ismail Haniyeh to prove that her son is alive and is being held by Hamas, in return for pressuring Israel to complete the exchange deal.

Masri pointed out that the video, which showed an image of Oron Shaul’s face, was a significant message to the government: that Netanyahu's gamble that Israel will be able to obtain its own intelligence about prisoners in Gaza over time "is a losing bet."

“[The government] should simply acquiesce to al-Qassam’s terms," Masri said. "The message to the Israeli society is that the Israeli government is sacrificing its soldiers and lying to society, and thus the government must be pressured.”

Masri added that Hamas and al-Qassam Brigades are not in a hurry to conduct an exchange deal that does not meet their conditions, and that they are managing the issue wisely and effectively.

Alaa al-Rimawi, an expert on Israeli affairs and head of Al-Quds Center for Israeli and Palestinian Studies, told Al-Monitor, “Israeli media have shown that the Israeli security services have been pressuring the soldiers’ families since the end of the aggression in order to keep them silent, so that Hamas is not given the ability to pressure the Israeli government in any negotiations for a new deal.”

In a Feb. 11, 2015, article, Al-Monitor reported that, before starting any new negotiations, Hamas is demanding that Israel release the prisoners that were rearrested after they had been exchanged under the Shalit deal.

Masri said, “This is a matter of principle. Hamas will not pay the price twice. Thus, releasing the prisoners of the Gilad Shalit deal must be separate from any future deal, and any new deal must be preceded by Israel committing itself to implement all the terms of the previous deal before we can start talking about a new deal. This means releasing all prisoners who have been rearrested.”

About whether there are any current negotiations toward an exchange, Masri said, “There is nothing new in this matter. It is a closed box. Hamas has formed a central command to manage it, and any information on this matter should be paid for in advance.”

Mustafa Sawaf, a political analyst and writer who is close to Hamas, told Al-Monitor, “Al-Qassam Brigades have been intelligently dealing with the captured soldiers’ case since the end of the aggression on Gaza [in 2014], as they do not talk about their number or condition and keep this matter secret to provoke the Israeli public — but at the same time they ready their cards for negotiations to reach a new deal.”

After the recent al-Qassam Brigades’ messages, it seems that the case of Israeli soldiers being held by al-Qassam Brigades will remain a prominent issue that might lead to a new deal along the lines of the last exchange.