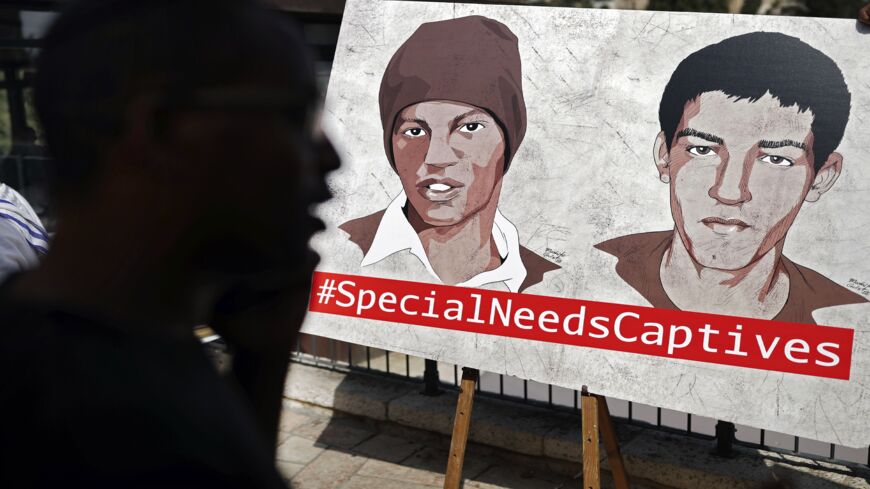 Ilan Mengistu (L), brother of Avera Mengistu (C), one of two Israelis held by Hamas in Gaza since 2014, attends a press conference organized by the captives' families calling for their release, in Jerusalem on Sept. 6, 2018. - THOMAS COEX/AFP via Getty Images

Hamas has released an audio clip of an alleged Israeli soldier held by the militant group, as well as video footage of a soldier released in 2011.

On Sunday, Al Jazeera Arabic’s “Tip of the Iceberg” program aired audio of a man whom Hamas identified as an Israeli soldier detained by the group's Izz ad-Din al-Qassam Brigades. In the clip, the man can be heard saying “I die every day anew” and asking whether "Israel still exists."

Al Jazeera also aired Hamas-provided footage of former Israeli soldier Gilad Shalit in captivity. Shalit, who was captured during a border operation in 2006, was later released as part of a 2011 prisoner exchange for 1,027 Palestinians held by Israel.

Hamas, which rules the Gaza Strip, is believed to be holding the remains of Hadar Goldin and Oron Shaul, two Israeli soldiers who were captured during the 2014 war. The militant group is also reportedly detaining two former Israeli soldiers, Avera Mengistu and Hisham al-Sayeed.

Some Israeli pundits speculated that the voice in the new audio was that of Mengistu. His mother, however, told Israel’s Kan public broadcaster it wasn’t him.

“I can say unequivocally that it’s not my son; that’s not his voice,” Agarnesh Mengistu said. “I’m waiting for my son, and I hope to see him soon as I have been promised.”

An Egyptian-brokered cease-fire ended an 11-day conflict between Israel and Hamas last month that left some 250 people dead, most of them Palestinians. Axios reported that Israel told the United States and Egypt it will prevent reconstruction in the Hamas-run Gaza Strip “unless progress is made” on the release of Israelis held by Hamas and the return of the soldiers’ bodies.

Late last month, Hamas’ political leader Yahya Sinwar said the group was ready for “immediate negotiations” on the prisoners. Sinwar himself was released in the last prisoner exchange in 2011 after serving 22 years of a life sentence for murder.

An unnamed Israeli defense official told Walla news last week that indirect talks on the prisoners had stalled due to political uncertainty in Israel, where a new government is poised to oust longtime Prime Minister Benjamin Netanyahu.