Despite multiple offers by Israel, Hamas refuses to make a deal for the release of three Israelis before Israel releases 50 prisoners it recaptured in 2014. 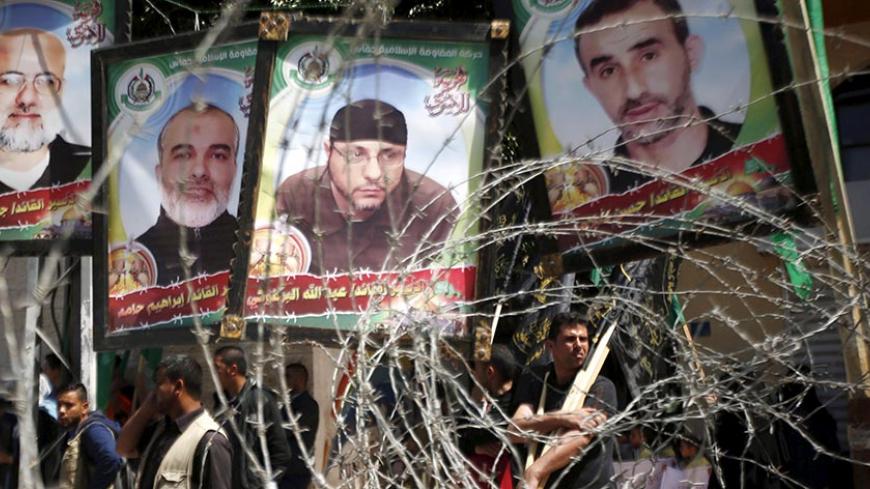 The prime minister’s special envoy on missing and captured Israeli soldiers, Col. (res.) Lior Lotan, revealed at the annual Herzliya Conference on Sept. 13 that Israel is holding 18 Hamas operatives it detained during the 2014 Operation Protective Edge, as well as the bodies of 19 Hamas members killed in the operation. The information had never before been revealed, and surprisingly, the families of the dead and imprisoned, members of Hamas' military wing, Izz ad-Din al-Qassam Brigades, have never spoken out on the issue.

Lotan probably divulged this information in the hope that the families in Gaza would pressure Hamas after Israel had done all it could to reach a deal with the organization on the return of the bodies of its soldiers Oron Shaul and Hadar Goldin and the safe return of three Israeli civilians who had crossed the border into Gaza: Avraham Mengistu, Hisham al-Sayed and Jumaa Ibrahim Abu-Ghanima.

At the Herzliya Conference of the Institute for Counter-Terrorism, Lotan spoke of two Israeli offers rejected by Hamas: exchanging the bodies of Goldin and Shaul in return for the Hamas operatives and bodies, and handing over dozens of Palestinians who had crossed the border from Gaza into Israel in recent years in return for the Israeli civilians being held by Hamas. Lotan claimed, however, that Hamas had set a precondition regarding other Palestinian prisoners, residents of the West Bank not connected in any way to the Gaza Strip or Operation Protective Edge. “Of course, we cannot abide a precondition,” Lotan said.

Al-Monitor has learned that one of the channels Israel used was the same one through which it achieved the October 2011 deal for the release of Israeli soldier Gilad Shalit, held captive by Hamas for five years. That deal, which freed some 1,000 jailed Palestinians in exchange for Shalit, was put together by senior Hamas official Ghazi Hamad and Israeli peace activist Gershon Baskin. The two maintained a channel of communication with the approval of Prime Minister Benjamin Netanyahu that directly involved David Meidan, Netanyahu’s previous envoy on prisoners and missing soldiers.

“I conveyed a proposal [to Hamad] a year ago,” Baskin confirmed to Al-Monitor. “But Hamas claimed that there’s nothing to talk about as long as Israel doesn’t release the prisoners released in the Shalit deal and subsequently re-arrested.”

Baskin was referring to the detention of some 50 Hamas operatives, freed in the Shalit deal and rounded up after the June 2014 kidnapping and murder of three Israeli youths: Naftali Frenkel, Gil-Ad Shaer and Eyal Yifrah. The Israel Defense Forces arrested them with the intention of putting pressure on Hamas that would result in finding the kidnapped youths. Netanyahu explained at the time that the detention of the prisoners freed in the Shalit deal was an important message to Hamas. Nevertheless, it is worth noting that their arrest was also one of the reasons that the war in Gaza erupted. Top Hamas figures felt at the time that Israel was robbing them of what was considered the movement’s most significant achievement against Israel. The ensuing rockets they fired from Gaza into Israel led to an escalation and to the Israeli military operation. The Hamas detainees have been in jail ever since.

“Hamas says they will not start negotiations until the detainees of the Shalit deal are freed,” said Baskin. “But that doesn’t mean they have rejected the deal.”

The person responsible for the precondition of no negotiations until the Shalit deal prisoners are released is Yahya Sinwar, considered Hamas' defense minister and himself a former prisoner released in the Shalit exchange. As I wrote for Al-Monitor in July, Sinwar views the release of the Palestinian detainees as leverage for his own promotion in the movement. At a rally that convened after his own release, Sinwar even declared, in reference to the pre-Oslo Palestinian prisoners, “We will not forget our prisoners who we left behind,” and he has indeed been acting in accordance with this perception. “Sinwar is unwilling to bend under any circumstances,” Baskin said.

A senior Hamas source confirmed to me that the Israeli proposals, which had also been conveyed to Hamas via a parallel channel, had not even been considered, and that even if they had been put up for discussion, they would have been unlikely to sway Sinwar, who wants the release of as many prisoners as possible.

Baskin met with the Mengistu family in 2015 and tried to bring proof of life to the anxious relatives, but Sinwar refused to allow a letter from Mengistu to be delivered. The only information provided by Hamas through the Baskin-Hamad channel was that Mengistu was alive and being held in good conditions. It was the first time an official Hamas source admitted to holding Mengistu. The information was conveyed to the family and to Lotan, but since then, Sinwar has been adamant in his refusal to maintain any contact with Israel that would bring about the release of the three civilians and the return of the bodies of soldiers Goldin and Shaul.

Will pressure on the part of the families in Gaza sway Sinwar and lead him to negotiate? Judging by the statements of Gazans who are familiar with his conduct, such pressure is unlikely to bring about any flexibility on his part.