Can Hamas agree to prisoner swap with Israel?

Egypt pushes Hamas to send Israel some signs, signaling that it is ready for a prisoner-exchange deal. 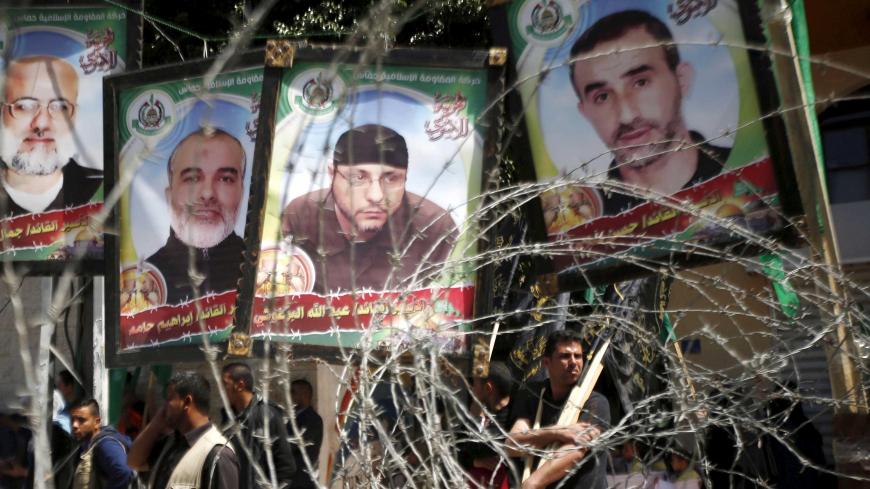 The head of Hamas in the Gaza Strip, Yahya Sinwar, and deputy head of its military wing Marwan Issa traveled to Cairo Dec. 1. Sources in the Hamas and Fatah movements told Al-Monitor that Issa’s presence was related to Egyptian efforts to cobble together an Israel-Hamas prisoner-exchange deal.

Issa, second-in-command to Mohammed al-Deif, is a member of the closed inner circle that conducted the negotiations for the 2011 release of Gilad Shalit, the Israeli soldier held by Hamas for five years. Since Sinwar was picked earlier this year to head Hamas in Gaza, Issa has been serving as liaison between the organization’s military and political wings. In essence, he took over from Sinwar, who was in charge of prisoner affairs before being appointed to the top job in the Gaza Strip. Ever since he himself was freed from an Israeli prison as part of the Shalit deal, Sinwar has placed a premium on the issue of Palestinians jailed by Israel.

Hamas is holding the bodies of two Israeli soldiers, Hadar Goldin and Oron Shaul, who were killed during the Israel-Gaza war known as Operation Protective Edge in the summer of 2014. It is also believed to be holding three Israelis — Avera Mengistu, Hisham al-Sayed and Jumaa Abu Ghanima, each of whom crossed from Israel into Gaza of their own accord between 2014 and 2016. Hamas has since refused to provide any information about them.

The leaders of the Hamas military wing, not its political arm, are the ones conducting the actual negotiations on the return of the soldiers’ bodies and the release of the three civilians — and thus far Israel has rejected its terms. Their threshold demand is for Israel to free dozens of Palestinians released in the 2011 Shalit deal and subsequently rearrested after the 2014 kidnapping and murder of three Israeli youths in the West Bank.

The most serious Egyptian-mediated talks between Israel and Hamas were held in June of this year, but failed to yield results.

Defense Minister Avigdor Liberman said two months later, “We must not repeat the mistake of the Shalit deal. In that deal, 1,027 terrorists were released, including murderers and those who dispatched them … including Yahya Sinwar, who [now] heads Hamas in Gaza.” Liberman added that Sinwar was presenting tough demands for an exchange deal, hampering its prospects.

Liberman made his remarks following the resignation of Israel’s point man on missing and imprisoned Israelis, Col. Lior Lotan. The Goldin and Shaul families claim Lotan quit because Prime Minister Benjamin Netanyahu and Liberman curtailed his bid to maneuver a compromise with Hamas.

There have been no further contacts between the sides since the failure of the talks in June. Defense officials assessed at the time that the gaps would not be bridged barring an unforeseen occurrence that would force Sinwar to back down from his ambitious demands. That occurrence took place on Oct. 30, when Israel blew up a tunnel dug by the Palestinians from Gaza into Israel.

Israel rejected an appeal by the International Red Cross to allow Hamas and Islamic Jihad to pull the bodies of their men out of the collapsed tunnel, with Coordinator of Government Activities in the Territories Maj. Gen. Yoav Mordechai saying that Israel would not allow the bodies to be removed “without significant progress on the issue of the missing and imprisoned Israelis.” Netanyahu said at the same time, “We do not give away free gifts.” Three days later it turned out that the Israel Defense Forces was holding the bodies of five Palestinians it had pulled out of the tunnel.

An Israeli defense source told Al-Monitor that Hamas is receptive to the pressure being exerted by the families of the Palestinians killed in the tunnel explosion. Hamas, he added, is slowly realizing that any deal with the Israelis will come down to an exchange of bodies for bodies, and that Israel will not back down an iota from this quid pro quo. Hamas leaders in the Gaza Strip also understand that they cannot remain indifferent for long to the pressure by Egypt, which seeks to reach a comprehensive deal — reconciliation between Hamas and Fatah and removal of the obstacles with Israel, enabling both countries to significantly ease their blockade of Gaza, according to the source.

A Hamas source told Al-Monitor on condition of anonymity that Issa is the man with whom Egypt is dealing on a possible agreement with Israel. The source said discussions are now focused on finding a mechanism enabling more serious contacts, rather than on moving forward with an actual deal. The source reiterated his organization’s claim that “Israel is not enabling any progress [in negotiations] since the end of the war [in 2014] due to its refusal to free 27 Shalit deal inmates who were rearrested. Egypt backs Hamas’ demand because it gave the guarantees for the [Shalit exchange] deal that took place in its territory,” he said. “Hamas will not back down from this demand as a precondition for progress.”

According to Palestinian sources, Egypt accepts Israel’s position that Hamas must first provide proof of life of the Israelis it is holding — a video or any other evidence that the Israelis being held by the organization in the Gaza Strip are alive and well. Israel is also demanding that Hamas provide proof regarding the bodies of the two soldiers being held by the military wing.

The main question now is whether Hamas and Israel will yield on their firm demands and preconditions. Israel is conditioning the return of the tunnel bodies on the return of the Goldin and Shaul remains, coupled with an exchange of Israelis and Palestinians in what is being termed a “humanitarian” deal. The Israeli source said Israel is holding some 25 Palestinians who crossed the border from Gaza in recent years, mostly to seek work, but three young men among them are said to be mentally disabled.

Egypt told Sinwar and Issa that there are no free lunches. It also told them that negotiations with Israel would only result in a deal if it had a reasonable price tag. The two Hamas seniors will now have to seek a decision by the heads of the military wing regarding the information and proof of life Israel is demanding before a comprehensive deal can be discussed.

Israel will not admit it, but a video clip showing its civilians held in the Gaza Strip in good shape will probably have an impact on Israeli public opinion and push the political echelons to reach a deal under conditions deemed reasonable.