Hamas' military wing has stated that the six prisoners recaptured after a prison break must be returned in any swap deal. 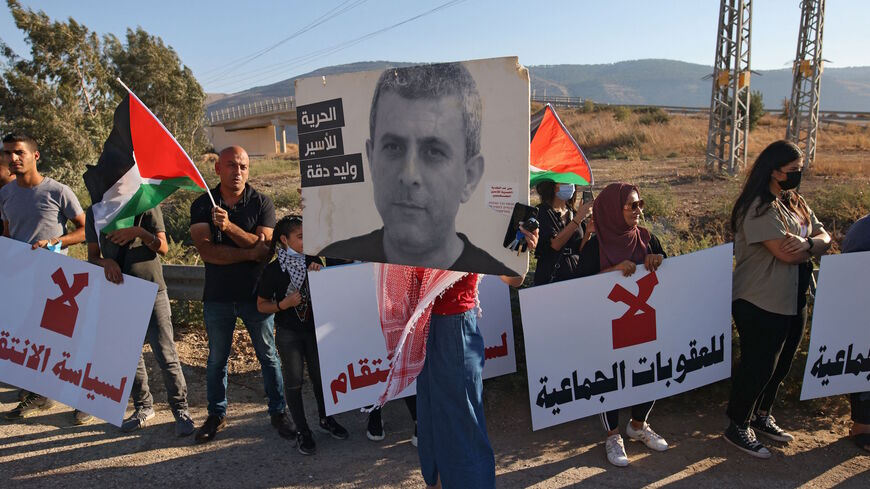 Arab-Israelis gather outside the Gilboa prison in northern Israel on Sept. 18, 2021, to express their support of the Palestinian prisoners in Israeli jails. - AHMAD GHARABLI/AFP via Getty Images

GAZA CITY, Gaza Strip — The Izz ad-Din al-Qassam Brigades, Hamas' military wing, has pledged not to conclude any new prisoner swap deal with Israel that does not include the six prisoners who escaped from Gilboa Prison on Sept. 6. Al-Qassam spokesperson Abu Obeida said, “The leadership of al-Qassam decided that no swap deal will be made unless it involves freeing these heroes” in an announcement broadcast by Hamas-affiliated Al-Aqsa TV on Sept. 11, following the capture of four of the escapees. The remaining two were later caught Sept. 19.

Hamas claims it is holding two Israeli soldiers captured during the 2014 Gaza war in addition to two other Israeli citizens who entered the coastal enclave. Israel maintains that the two soldiers were killed in action and is seeking the return of their remains.

On Sept. 6, inmates Mahmoud Ardah, Yaqoub Qadri, Mohamad Ardah, Ayham Kamamji and Munadil Nfeat of the Palestinian Islamic Jihad and Zakaria Zubeidi of Fatah’s armed wing, broke out of the high-security Gilboa Prison in Beit Shea in an operation that has come to be known among Palestinians as “the Freedom Tunnel.”

Following their capture, Abu Obeida said in his televised speech, “The Freedom Tunnel heroes freed themselves [by going] underground this time. We promise them and our other prisoners that they will be liberated soon, God willing, from above ground.”

The armed resistance factions, which include Hamas and the Palestinian Islamic Jihad (PIJ) called on Palestinians to observed Friday prayers in solidarity with the Palestinian prisoners in Israeli prisons on Sept. 17 in front of the International Committee of the Red Cross headquarters in Gaza City and dozens of citizens responded.

Khalil al-Hayya, a member of Hamas’ political bureau, said during Friday’s sermon there that his “movement is seeking with all its power to liberate the prisoners.”

He continued, “We are holding meetings in the morning and in the evening and we are making plans with our resistance to free the inmates from the prisons, to have them soon among us, as leaders, brothers and fighters.”

He said that the prisoners Israel recaptured will be “at the head of the next swap deal,” and added, “This is a decision that our resistance and our movement made, and we will keep our promise.”

Nahed al-Fakhouri, director of the Hamas-run Prisoners Information Center in Gaza Strip, told Al-Monitor, “Following the 2011 swap deal, the resistance pledged to secure the release of the rest of the prisoners. That is what Hamas is currently striving for.”

Fakhouri said, “The Israeli government complied in advance with the resistance's conditions, and history is repeating itself. Hamas has four Israeli prisoners about whom it has not provided any information since 2014, and Israel has not been able to obtain any information about them.”

Fakhouri noted, “No progress has been achieved in the swap deal so far, but mediation is underway. The resistance set the condition of releasing the inmates that Israel recaptured after their release in the Gilad Shalit swap deal, which Israel refused. This rejection and intransigence is delaying the deal.”

Saleh al-Arouri, deputy head of Hamas’ political bureau and a key leader running the indirect talks, told Al Jazeera Sept. 1 that at the end of the fighting in May, “Israel tried to include the prisoners’ dossier in the cease-fire and the lifting of the siege on Gaza [agreement], which we rejected. They continue to put forward ideas, but our position is very clear.”

Arouri added, “We insist on a deal that includes prisoners who have been behind bars for a long time, those serving significant sentences, women, children, ill prisoners, the elderly and the bodies of martyrs. The details regarding the numbers and names will be decided during the negotiations.”

Although the PIJ is the second most powerful military faction in the Gaza Strip, it has never succeeded in capturing Israeli prisoners or concluding a swap deal. It differs from Hamas in conducting only military resistance and refuses to join any political process. It considers Palestine, stretching from the river to the sea, an Arab Islamic land and holds that it is religiously unacceptable to give up an inch of it.

PIJ leader Khaled al-Batsh told Al-Monitor after the prayer in front of the  ICRC headquarters on Sept. 17, “We heard from Hamas that PIJ prisoners are a priority in the swap deal, which shows Hamas’ support for the prisoners. We praise this promise.”

There are nearly 4,650 Palestinian prisoners now in Israeli jails, including 40 female inmates, about 200 minors and 520 administrative prisoners, held without charge or trial, according to the Palestinian Prisoners Club.

The PIJ warned that all options are on the table if the prisoners are harmed. Spokesperson Daoud Shehab said at a demonstration held in solidarity with the prisoners on Sept. 15 that a number of Palestinian prisoners are staging a hunger strike inside Israeli prisons in protest of tightened Israeli restrictions.

He added, “The Israeli Prison Service aims to end any body representing the PIJ in prisons.” Dozens of the PIJ leadership and cadres were placed in solitary confinement after the jailbreak.

Hamas warned in a Sept. 17 statement that were will be “repercussions for the Israeli authorities’ ongoing escalatory measures against the inmates in prisons."