Minister of Public Security Omer Bar-Lev thanked Arab-Israelis for assisting in the capture of escaped Palestinian prisoners, but not all of them are comfortable with the situation. 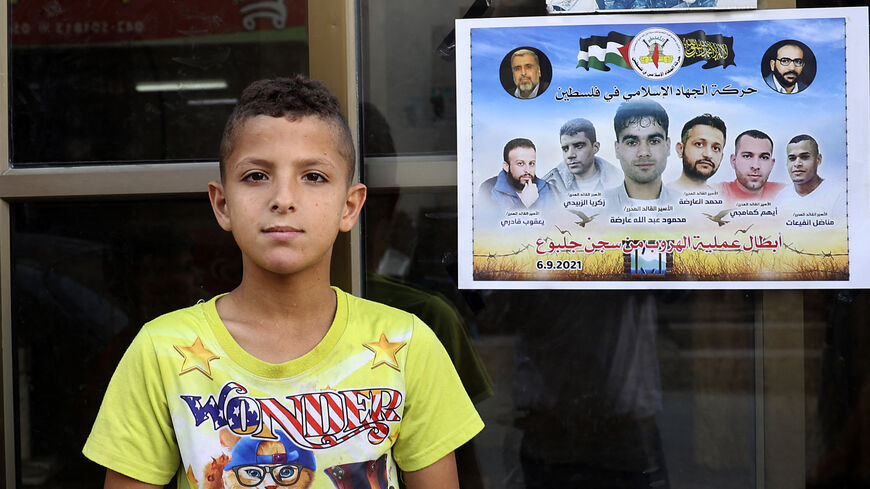 A Palestinian child stands next to a poster expressing solidarity with the six Palestinian prisoners who escaped from Israel's Gilboa prison hanging outside a shop at the Jenin camp for Palestinian refugees in the north of the occupied West Bank on Sept. 12, 2021. - JAAFAR ASHTIYEH/AFP via Getty Images

Arab-Israeli society was split over the escape of six Palestinian inmates from prison, and the divide has only grown deeper with the capture of four of them.

The affair started on Sept. 6, when six Palestinian prisoners managed to escape from Gilboa Prison, apparently through a tunnel. Gilboa Prison's reputation as Israel’s most secure penitentiary heightened the drama, as did the identity of the prisoners: Zakaria Zubeidi, a former senior commander in Fatah’s armed wing Al-Aqsa Martyrs Brigade, along with five members of the Palestinian Islamic Jihad.

On Sept. 11, after days of manhunt, four of the prisoners were captured in two separate incidents in different locations. The first two, Yaqoub Qadri and Mahmoud Ardah, were caught on Mount Precipice in Nazareth, after a local resident called the police to report suspicious individuals who he suspected of being in Israel illegally. The other two, Zakaria Zubeidi and Mohammed Ardah, were caught at a truck stop in the northern town of Umm al-Ghanam. Their arrest took place after a local tractor driver saw them and reported them to the police. The hunt for the remaining two fugitives continues.

The mixed reactions in Arab-Israeli society and the arrest of the four men with the help of Arab-Israeli citizens form another chapter of the complex story of Arab society in Israel in the twenty-first century. Once again, Israelis learned that Arab citizens are no longer a homogeneous bloc with the same views. Rather, they represent a rich variety of opinions and positions. Minister of Public Security Omer Bar-Lev expressed gratitude for the role played by Arab citizens in capturing the escaped prisoners. However, there was also a demonstration in support of the prisoners by political activists from several Arab parties, during which a reporter for Channel 13 News covering the hearing and the demonstration was injured.

One could argue that there is no comparison between the escaped prisoners and the other issues. Nevertheless, it showed how Arab society in Israel cannot be expected to speak in one voice. This misperception was clear a few months ago, when demonstrations erupted in the country’s mixed towns. It was also evident when the IDF refused to let Arab truck drivers to enter military bases as contractors during Operation “Guardian of the Walls” last May.

Samer Atamni, a political activist who founded the Rayetna Movement for coexistence, discussed the situation with Al-Monitor. “Arab society is a society in transition. Like any other society in the world, it has a diverse array of ideas, which are best expressed in attitudes about self-identification and citizenship. We are currently witnessing a clearly existential process, the proof being the rise and success of [Ra’am leader] Mansour Abbas with his moderate platform, focusing more on civil than on national rights. Arab society is split and conflicted over how it defines its future and its participation in Israeli society. It is concerned to some degree or other about the loss of identity, but this [topic] creates confusion among Jews and Arabs alike.’’

Atamni said that this confusion clouded the escape. “There were those who identified fully with their escape and all that this represents in terms of their struggle for freedom and an end to the occupation. But there were also those — and I think they are a minority — who opposed providing them with aid and reported them to the police. The debate between these two groups is blowing up on social media.”

It must be remembered that Arab society in Israel was originally part of a larger Palestinian people. They did not emerge out of nowhere in 1948 with the founding of the State of Israel. They were part of the country’s indigenous Arab population who happened to receive Israeli citizenship when the state was founded. The hunt after the escapees spotlit the paradox lived and experienced by a significant part of Israel’s Arab population and the complex circumstances that they deal with on a daily basis.

On one hand, Arab-Israelis want to be law-abiding citizens and an integral part of Israeli society. On the other hand, they struggle to come to terms with the long and ongoing occupation of Palestinian lands. This paradox evoked debate on social networks over the capture of four of the fugitives in Nazareth and Umm al-Ghanam and questions about the common destiny of Arabs on the Israeli side of the Green Line and the Palestinian people living in the West Bank and Gaza.

Sami Ali, a strategist and former spokesperson for the Joint List, told Al-Monitor that there is consensus among Arab-Israelis on the escape. "There was no debate and no opposition to their escape from any part of the Palestinian people: not in the West Bank, not in Gaza, and not among the Arab citizens of Israel. There is consensus that the prisoners have a right to freedom and liberty, but expressions of identification among Palestinian citizens of Israeli were limited to social networks. The reason for this is that when it comes to political-security issues, Israel treats its Arab citizens as potential suspects. Even the prisoners themselves showed personal responsibility by maintaining a distance and not coming into direct contact with Arab citizens of Israel, because they are aware of the dangerous implications this could have for them.”