Two of the six escaped prisoners were caught in the northern city of Nazareth. Israeli forces previously searched the homes of the prisoners' families, according to Palestinian media. 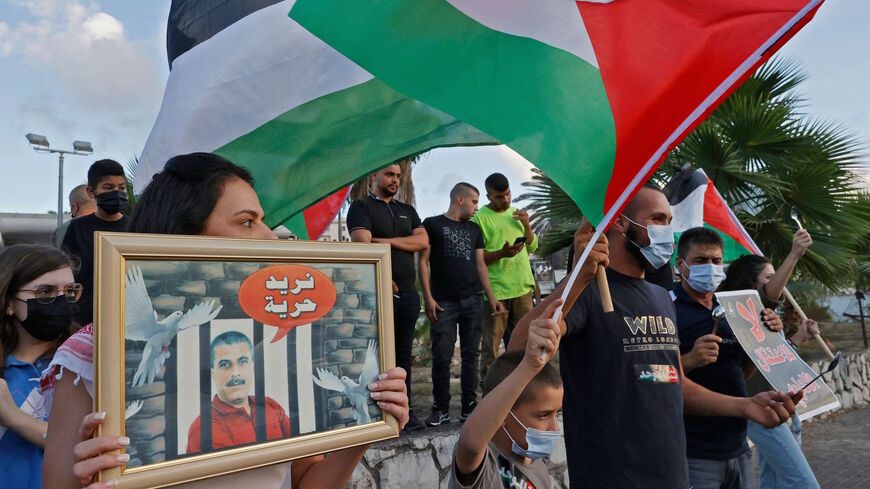 Arab Israeli protesters demonstrate in the mostly Arab city of Umm al-Fahm in northern Israel, on Sept. 10, 2021, to denounce punitive measures taken by the Israel Prison Service against Palestinian prisoners, after six of them escaped from the northern Gilboa prison. - JACK GUEZ/AFP via Getty Images

A rocket from the Gaza Strip was intercepted over Israel late Friday night after two escaped Palestinian prisoners were captured.

The rocket was intercepted by Israel’s Iron Dome aerial defense system, the Israel Defense Forces said in a tweet.

The attack came shortly after the Israel Police captured two Palestinian prisoners who had previously escaped, according to Israeli media. The two prisoners, Yaqoub Qadri and Mahmoud Ardah, were walking around the predominantly Arab city of Nazareth in northern Israel asking for food before they were caught, Israel’s public broadcaster Kan reported.

Qadri and Ardah were among the six Palestinian prisoners who escaped from the high security Gilboa Prison on Monday. The jailbreak led to a massive search by Israeli security forces, as well as solidarity protests in the West Bank and Jerusalem. Qadri and Ardah are members of the Gaza-based Islamic Jihad and were imprisoned in relation to attacks on Israelis.

Israeli security forces raided homes belonging to family members of Qadri and Ardah near Jenin in the West Bank earlier on Friday. They also arrested some of their relatives, according to the Palestinian Authority’s WAFA news agency.

No group immediately claimed credit for the rocket launch. The Palestinian armed group Hamas, which controls Gaza, previously said it would respond to any retaliatory action by Israel regarding the escape, according to affiliated media. Hamas is an ally of Islamic Jihad.

Israeli forces said they caught two more of the prisoners Saturday, including Zakaria Zubeidi, who is part of the ruling Fatah's party armed wing.