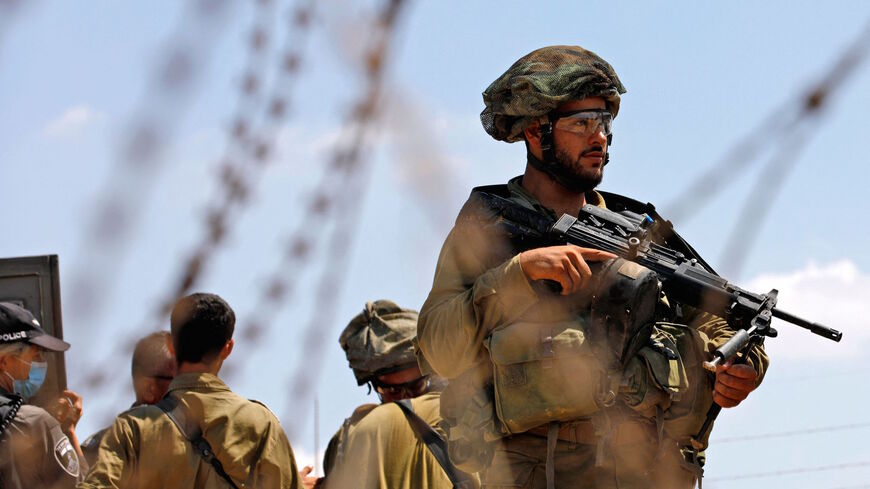 Israeli security forces patrol along the security fence in the village of Muqeibila near the West Bank town of Jenin on Sept. 6, 2021, following the escape of six Palestinians from an Israeli prison. - JALAA MAREY/AFP via Getty Images

Israeli Prime Minister Naftali Bennett had good reason to be optimistic on the eve of the Jewish new year, Rosh Hashanah, on Sept. 6. His gamble on the coronavirus vaccine booster proved successful, stemming a fourth wave of the disease and allowing Israelis to celebrate the holiday season free of lockdowns or significant limitations, following three lengthy, draconian closures imposed by the Netanyahu government during previous holidays. The state budget had made it through a preliminary Knesset vote with relative ease. Bennett seemed to have been dealt a pretty good hand. But in the pre-dawn hours of Sept. 6, six Palestinian inmates tunneled their way out of the high-security Gilboa Prison in the Jezre’el Valley, turning the traditional Rosh Hashanah dish of apple dipped in sweet honey into a bitter joke.

Zakaria Zubeidi, the former chief of Palestinian security in the West Bank town of Jenin, along with five members of the Islamic Jihad organization had made a mockery of the Israel Prison Service, the police, the vaunted Shin Bet security agency and the military. Despite a massive manhunt and intense intelligence efforts, the six have not been found. What is worse, the Palestinian public has turned them into folk heroes, setting off clashes and protests from Jenin in the north to the Gaza Strip in the south.

“We are using all the means at our disposal to catch them,” a senior Israeli security source told Al-Monitor, speaking on condition of anonymity. Reporters are being told that Israel has no leads on the location of the escapees. However, anyone familiar with similar events and with the capabilities of the Shin Bet knows this is not necessarily a precise description. The lead could be found at any given moment or has perhaps been found already. Anyone who knows the reach of Israel’s intelligence arms knows it will eventually locate the six, as it has done with almost every terrorist on its wanted list, even if it takes weeks or months.

The question is whether Zubeidi and his mates will be found in the West Bank, making it much easier for Israeli troops and Shin Bet to catch them, or, in a worst-case scenario to shoot them dead while attempting to capture them. Israel is also scouring border areas to see whether the escapees have managed to cross to Jordan or perhaps Lebanon, which would dramatically enhance their prospects of surviving the escape. More importantly, will the escape and ensuing search stir up mass Palestinian support and anger, providing the needed energy for renewed rioting or even a third intifada? After all, the escape has already ignited the imaginations of many Palestinians and is being touted on social media throughout the Middle East.

Nearly 5,000 Palestinian terrorists are incarcerated in Israeli prisons. Almost all were involved to some extent in terror attacks on Israeli targets, among them innocent civilians. Over the years, Israel has freed thousands in exchange deals for Israelis held by Palestinian groups or as goodwill gestures toward the Palestinians at various points of the protracted negotiations between the sides. The continuing terrorism by Hamas, Islamic Jihad and other organizations funnels an almost endless supply of so-called “security prisoners” into the Israeli prison system.

The Palestinian side, for its part, views these prisoners as freedom fighters, even those found guilty of murdering innocents. This perception enjoys unusually broad consensus in the divided Palestinian arena. The Shin Bet and military intelligence are operating on the assumption that a major prisoner-related incident could spark rioting in the West Bank and Gaza almost overnight, regardless of the circumstances. Such an incident occurred this week. It was not a terror attack on civilians or escape by Palestinians after shooting at Israeli soldiers. The prison break has taken on a mythological quality with its heroic tale of prisoners sentenced for life who successfully breached the walls of the Israeli occupation and made a laughingstock of the powerful Israeli security apparatus. It would be hard to find a single Palestinian, even those seeking to live peacefully side-by-side with Israel, whose imagination has not been fired up by the feat of the six escapees.

Will the heightened emotions die down, at least until (and if) the escapees are found? Five days after the escape, tensions are still at a record high. Friday prayers at Al-Aqsa and other Jerusalem mosques are potential hotspots. The Palestinians have already called for a “day of rage” — protests and clashes with Israeli police and soldiers — over the crackdown on Palestinian inmates following the escape and the harsher conditions imposed on them. And what about the combustible border with Gaza, which has been almost calm in recent days? Although the escapees are not members of Hamas, will the organization take advantage of the unrest to resume attacks on Israel? And what about its Islamic Jihad ally in Gaza, the organization armed with thousands of rockets and which counts five of the six among its ranks?

Bennett and Foreign Minister Yair Lapid will have to maneuver cautiously through this minefield. Former Prime Minister Benjamin Netanyahu and his acolytes have so far been unable to pin the escape fiasco on the new government for the simple reason that it was not directly responsible for the alleged ridiculous amateurism of the prison service and the deep flaws exposed by the escape. But if the event deteriorates into violence, exposing the fragile government’s weakness, Bennett could find himself in trouble. His diverse coalition will not survive a single round of violence sparked by the escape. Knesset member Mansour Abbas, head of the Arab Islamist Ra’am party in Israel that is ideologically close to the Islamist Hamas in Gaza, might find it difficult to remain in government and provide his party’s continued support if bloody clashes break out between Arabs and Jews.

Bennett needs to hold on until November. Final Knesset approval of his government budget would grant him significant protection from the opposition for the next two years. However, from now to November there are at least seven Fridays on the calendar with their potential for igniting Palestinian rage. Bennett must also make sure the escapees are caught within a reasonable time period, restore Israel’s battered prestige and do so without setting fire to flammable areas — hardly an easy task.