Finance Minister Avigdor Liberman and Prime Minister Naftali Bennett are satisfied: After a long period without a real state budget, Israel finally got one. 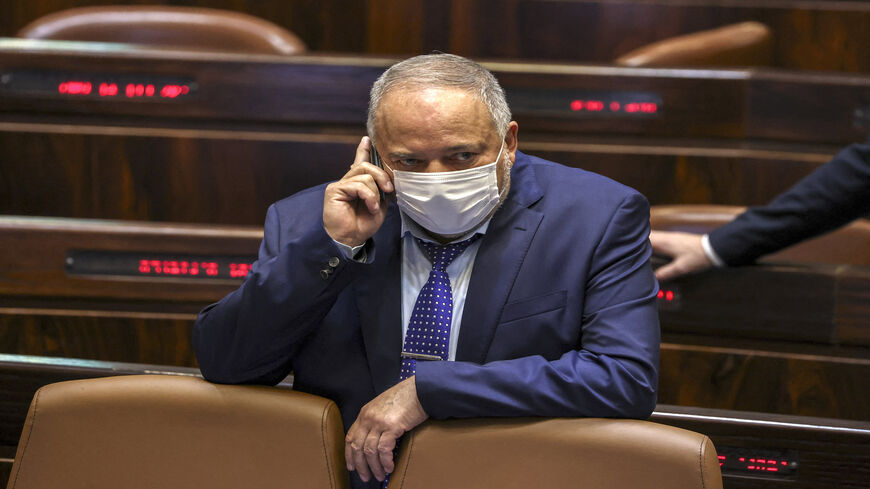 Israeli Finance Minister Avigdor Liberman speaks on his cellphone as he attends a plenum session on the state budget, Jerusalem, Sept. 2, 2021. - Ahmad Gharabli/AFP via Getty Images

Israeli Finance Minister Avigdor Liberman was in high spirits Sept. 2, as he roamed the Knesset’s corridors. A few hours before, the Knesset approved a first reading (out of three required readings) of the state budget for 2021-22, and he knew that he would get past this ominous hurdle, which threatened the government’s stability.

Liberman worked hard over the last few days, searching for solutions and compromises, and dismantling the many obstacles along the way. Volatile issues like raising the retirement age for women encountered stiff opposition from female members of the coalition’s left-wing partners. He resolved these issues methodically, tackling them one by one. After a marathon meeting with those concerned parliamentarians, he instructed the staff of the Finance Ministry to come up with a security net for women from weaker sectors of the population, especially those with jobs most likely to cause burnout.

The mood was certainly congenial. Liberman even had pizza delivered during these discussions. If anything, it was a sign of goodwill between the minister and his coalition partners from across the political spectrum. Everyone knew that this was the big test for the new coalition. Failure would have devastating consequences, and could even indicate the coalition’s demise.

But it didn’t fail. Everything went smoothly and better. By 10 p.m., Liberman tweeted, “We did it! The State Budget and Arrangements Law passed their first reading in the Knesset!” It almost seemed like a signal to the rest of the coalition that they could begin to celebrate. Representative from all the parties immediately started tweeting self-congratulatory posts, accompanied by photos of themselves hugging their allies and celebrating the momentous occasion. They were certainly pleased with themselves.

And for good reason, too. This was, in fact, a significant achievement for the new government. Most of all, it was a personal victory for Liberman himself as architect of the project to topple former Prime Minister Benjamin Netanyahu. It all began three years ago, in November 2018, when he shocked everyone by handing in his resignation as defense minister. It has been a long slog since then, but finally, Liberman could say, “Mission accomplished!”

Passing a state budget is always a huge test for the ruling coalition. It has led to the collapse of coalition governments on more than one occasion. Attempts to cobble together a budget inevitably leads to clashes between different, often diametrically opposed economic worldviews. When a coalition lacks stability, “the budget” can easily turn into the trigger that blows it all apart.

That's why observers have paid rapt attention to budget negotiations over the past few weeks. And while it must still pass additional readings, passing this initial reading bodes well for the future. When all members of this complicated coalition — with a bare majority of just two seats — are committed to the government’s survival, they will find solutions to any obstacle.

It was important for Liberman to highlight the positive mood and goodwill that went into creating his budget. Just a few hours before it was passed, he tweeted about how happy he was: “As I walk through the Knesset, it feels like a holiday. Passing a budget should be a matter of routine, but the fact is that this did not happen like that in the 21st, 22nd and 23rd Knessets. Instead, there was an extended deadlock. That's why we are so excited today. I won’t apologize for how I feel. Happy Budget Day!”

The budget itself contains no great messages about the country’s direction. It has controversial clauses, including those pertaining to the large pensions paid to career officers, but it also contains agricultural reforms, intended to lower the steep price of fruits and vegetables in Israel, by opening up the market to imports.

Truth be told, there have been bolder budgets than this, and certainly more revolutionary ones. Still, there has never been a budget whose greatest achievement is the simple fact that it passed. This alone is a big deal, after a year and a half in which Israel had no budget at all — due to squabbling between Netanyahu and his then-coalition partner, Defense Minister and Blue and White leader, Benny Gantz. This was problematic. It impinged on the ability of ministries to function, especially during the coronavirus crisis. In that sense, the Bennett-Lapid government brought a sense of stability to the economy. Now, barring any unforeseen problems, the government should be able to get the budget through a second and third reading this November.

Passing the budget is also important for the public’s perception of the government. It is proof that a coalition that includes both an Arab party (Ra’am) and parties on the hard right can function. For the sake of stability, it can show the maturity needed to bridge ideological differences between its components no matter how different they are.

Across the aisle, the opposition realized from the outset that it would not be able to recruit coalition members to oppose the budget with them. Adding to this was the image of opposition leader Netanyahu, sitting in the quarantine section of the Knesset gallery, after returning from a two-week vacation in Hawaii. This added a whole new dimension to the event.

For many long hours, Netanyahu sat all alone, surrounded by empty seats. He was wearing a black mask and clutching the autobiography of David Cameron, Britain’s former prime minister. Every so often, he would read his book or surf the net on his new iPhone. It wasn’t always a positive image. Social media was filled with sad photos of him there, underscoring yet again that he was no longer in power.

When it was his turn to address the Knesset (from the gallery), he fired shot after shot at the Bennett-Lapid coalition. He called it a “government of failures,” and blamed it for a bad budget, which he claimed hurts the weakest sectors of the population. Inevitably, he also attacked the government for its handling of the coronavirus pandemic, security and foreign policy.

Netanyahu attacked Bennett personally, too, taking great care not to call him “prime minister.” Resorting to sarcasm, he said, “For the sake of a photo op in the White House, Bennett avoided mentioning the [Aug. 21] murder of IDF soldier Barel Shmueli [on the Israel-Gaza border]. He even handed out free gifts to the Palestinians. This is not a government of healing. It is a government of infirmity.”

While it was a good opposition speech, it contained no news and no vision for the future. Netanyahu is well aware that he has run out of cards, so he is waiting patiently for the government’s next big test. He believes that it will be triggered by some external event, which will send shockwaves through the government.

In the meantime, Netanyahu has reason to be pleased with having maintained public support on the right. Polls show that he has maintained his strength, with a projected 30 seats or more for the Likud. And he continues to come out on top in rankings of who is best suited to serve as prime minister.

These are all good signs as far as Netanyahu is concerned. On the other hand, there is no election on the horizon, and public opinion is flexible and fickle. In other words, the situation is fluid.

In October, Netanyahu will celebrate his 72nd birthday. It will be the first time in 12 years that he will mark this event while not in office as prime minister. Outwardly, he relays a sense that he plans to fight to win back the office. In practice, however, things are a bit more complicated. The government scored major points by passing a budget and is stronger because of it. Meanwhile, Netanyahu must deal with fighting in the Likud over who will succeed him. Finally, his trial starts up again in October, right after the holiday season. The big question now haunting him is when he will finally decide that he has had enough.