With a new podcast and headquarters and renewed enthusiasm, opposition head Benjamin Netanyahu is already campaigning for the next election. 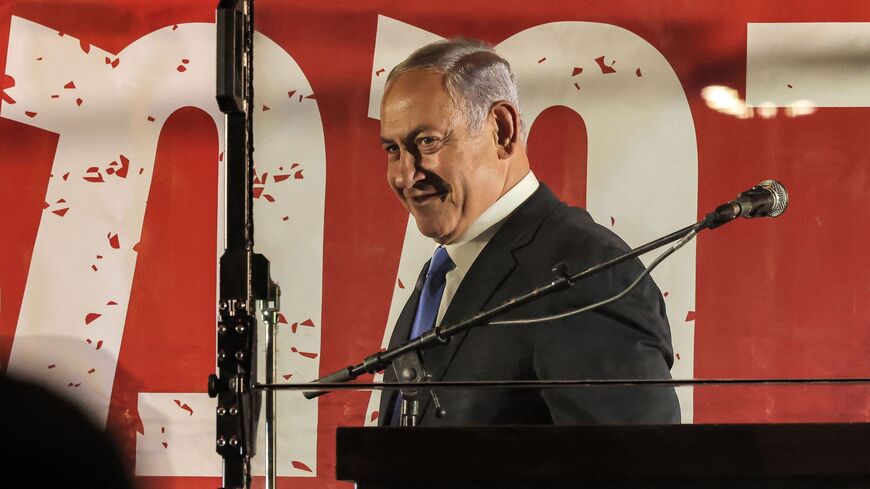 Former Israeli prime minister and current leader of the opposition Benjamin Netanyahu appears before supporters behind a glass panel during an anti-government protest by Israeli right-wing demonstrators in Jerusalem on April 6, 2022. - MENAHEM KAHANA/AFP via Getty Images

Former Prime Minister Benjamin Netanyahu launched a new video podcast last week. The show follows a familiar format, with Netanyahu and a guest spending an hour discussing one of the major issues facing Israel. The guests he chooses are prominent figures from the particular focus of that show.

For example, in the first episode Netanyahu discussed the economy, a subject near and dear to him, with Avi Simchon, former chairman of the National Economic Council. Simchon is close to Netanyahu and considered one of his biggest admirers.

The location for their chat was Netanyahu’s office in Metzudat Ze’ev, the home of the Likud party, in downtown Tel Aviv. The set featured a bookcase, a flag and soothing lighting. Netanyahu used the occasion to tell stories about his own economic successes as finance minister and prime minister. Many considered Netanyahu an outstanding finance minister, responsible for major economic reforms that saw the country through the economic crisis of 2003.

Most Israelis have heard these stories before, but many listeners tuned in anyway. The podcast had 70,000 views in just a few days. Toward the end of the episode, Netanyahu talked about his 2018 meeting with American entrepreneur Elon Musk. He said Musk offered all kinds of suggestions as to how Israel could resolve its traffic problems. Musk is much better known in Israel today than he was four years ago. With his knack for PR, Netanyahu surely pulled out Musk’s name toward the end of the podcast to make headlines.

Netanyahu’s podcast is not just a former leader's effort to preserve his legacy. It is the work of a politician in motion, running to return as the country’s prime minister. Even now, at age 72, the leader of the opposition is still the “comeback kid” of Israeli politics. As inconceivable as it may seem, he manages to reinvent himself regularly with each new political cycle.

A year ago, with the criminal proceedings against him, there seemed to be no way for him to return. But Netanyahu stayed for the exhausting legal fight and his lawyers recently scored a series of successes. Many observers now feel that his bribery charges will be dropped. Regardless of whether that happens, the trial will not be over before the next election.

The slow collapse of the coalition is playing right into his hands. Netanyahu gets stronger in the polls with each passing day. He has not yet secured 61 seats for his rightwing-ultra-Orthodox bloc, but he’s getting very close. According to the most recent poll, he is projected to control 59-60 seats, with his own party winning 35. Alternate Prime Minister Yair Lapid comes in second, with just 20 seats for his Yesh Atid. The poll gives incumbent Prime Minister Naftali Bennett just 5 seats.

Netanyahu’s position in the Likud is stronger than ever. He polls way above anyone else in the party, including his former ministers. There is no one who can challenge his leadership.

Netanyahu seems to be living it up and in a great mood. In the evenings he attends cultural events with his wife and is seen at all the important weddings that receive major coverage in the press. Based on the videos from these events, he makes his grand entrance just like a rock star, surrounded by adoring fans.

Netanyahu spends most of the day pouring everything into his work. Last week he established his election office and started appointing people to senior positions in it. His campaign is based on the claim that Bennett is selling out the Zionist enterprise and dream for the sake of pleasing Muslim Ra’am party and keeping their Knesset support.

This argument is not without problems for Netanyahu, who himself had cooperated before the elections with Ra’am leader Mansour Abbas for the sake of his support in the Knesset. The sore point will likely play into the hands of Netanyahu’s adversaries. That being said, Netanyahu has an answer. He claims that he needed Abbas’ support for one specific issue and that he never planned to form a coalition with him.

The second major focus of his campaign is the economy. Housing costs in Israel went up 15% in the last year alone. The overall cost of living and the price of gas skyrocketed as well.

While the government claims that this spike of prices can be attributed to a worldwide economic crisis, Netanyahu still knows how to milk the situation to his advantage. His populist argument is that the Bennett-Lapid government paid tens of billions of shekels to buy the support of Ra’am at the expense of patriotic Israeli taxpayers who are struggling to support themselves.

In a speech to the Knesset July 13, Netanyahu seemed to enjoy mocking and attacking Bennett, who was sitting right in front of him. Netanyahu addressed Bennett’s recent warning against what he called a campaign by “a machine of poison and lies” against his coalition government.

“You call men and women critical of you a ‘machine of poison,” Netanyahu said. “Stop disparaging Israeli citizens, people, like that.”

Bennet seemed helpless as he sat listening, surrounded by empty chairs that should have been occupied by his cabinet and the members of his coalition. He seemed all alone in this battle.

Netanyahu struck again: “I see the empty seats in the coalition. They know that the end is near, so one after the other, they are abandoning the sinking ship. They can all see the truth. This government of extortion and protection is crumbling and collapsing on all of our heads.”

Next week we will find out whether the Bennett-Lapid coalition manages to survive until President Joe Biden visits Israel next month. Whether it does or not, its overall prognosis is miserable. Israel is heading toward yet another election in the next couple of months.

Will Netanyahu be back? It is not at all certain. Whether it would be a good or bad thing all depends on who you ask.