Having made history as the first Arab party to be part of the coalition, Muslim Ra’am says it hopes to be part of whatever coalition will be established after the Nov. 1 elections. 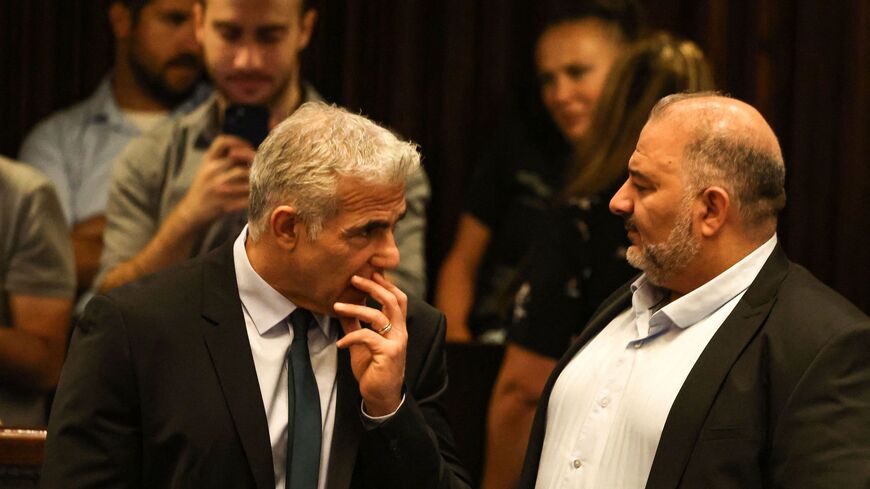 The June 30 decision by the Knesset to dissolve itself forces all parties anew to take sides ahead of the Nov. 1 elections. This is particularly true for the Arab Muslim Ra’am party, which is currently part of the coalition.

As a reminder, two years ago when then-Prime Minister Benjamin Netanyahu was with his back against the wall, he started establishing ties with Ra’am and its leader, Mansour Abbas. Paradoxically, these new ties opened the way for Ra’am to enter the Bennett-Lapid coalition. Still, the way things look now, the political willingness of opposition leader Netanyahu to re-engage with Ra’am is long gone.

In fact, Netanyahu used his June 29 Knesset speech to announce that “unlike [Prime Minister] Yair Lapid, we will not form a government that relies on the Muslim Brotherhood and supporters of terrorism.” The response from Ra’am to that speech was quick in coming. Abbas shouted out, “You negotiated with us last time!” This resulted in a raucous barrage of calls from the Likud benches: “Sit down, you liar!”

But that was not the end of the heated discussion prior to the decision to dissolve Israel’s parliament. An angry clash broke out between Abbas and Knesset member Ahmad Tibi of the Arab Joint List. Tibi accused his rival from Ra’am of fawning over Netanyahu and the Likud, and he did it using very “unparliamentary” language. Tibi shouted, “You kissed [Netanyahu’s] ass to be in a coalition with him, and you’re willing to kiss his feet too.” Abbas responded, “Oh, the shame. I sent [Netanyahu] home. You are bringing him back!”

At some point, Arab Joint List leader Ayman Odeh also entered the fray, telling Netanyahu that the Arab members of the Knesset who had cooperated with him have “no values.” As he said this, he pointed at Abbas. Later on, Odeh denounced Tibi’s remarks in an interview with Arabic-language Nas Radio. “It would have been if he said it differently. There’s no need to use that kind of language.” Still, he did not walk back the spirit of the accusation.

Clearly, these verbal clashes at the Knesset were just the opening salvo of the election campaigns of both Ra’am and the Joint List. The animosity between Abbas and his former colleagues in the Joint List is expected to resonate within Arab society throughout the upcoming months and all the way to Nov. 1. That is because the original reason for the divide between Ra’am and the Joint List has increased and been reinforced during the current government. Both parties espouse different views on cooperating with a coalition. Ra’am advocates for a strategy of joining the coalition in every future Knesset, as written here in an earlier article. The Joint List is against cooperating with any coalition that does not advance negotiations with the Palestinians.

All this raises important questions concerning Ra’am’s strategy. Will the party endorse Lapid as prime minister in its upcoming election campaign? Or will it repeat the strategy of its previous campaign and play the field, with the intention of joining whatever coalition is formed?  Should the party stick with Lapid now in order to give him a boost and ensure that he remains prime minister?

Evidently, it would be easier for Ra’am to continue cooperating with most members of the current coalition led by Lapid and Yesh Atid. Alternately, the party could announce that it refuses to commit to either side so that they could take advantage of the situation in which Netanyahu needs their votes in the future to form a new coalition. That’s almost exactly what would have happened last year if the leader of the Religious Zionist party, Bezalel Smotrich, hadn’t prevented it and attacked the Likud for even negotiating openly and behind the scenes with Ra’am.

Some indication of the approach that Ra’am is planning to take can be seen in remarks by a senior member of Ra’am and its Shura religious council, who asked not to be named. He told Al-Monitor, “We are continuing along the same path, which highlights a commitment to Arab society first and foremost. Obviously, we would prefer that the current coalition last into the next Knesset so that we can continue to advance the programs we began to benefit the Arab public.”

The Ra’am senior continued, “If, however, that turns out to be impossible after the election, we do not reject anyone who does not reject us. We are prepared and ready for any political partner in a coalition that would benefit Arab society.”

Based on what he said, it looks like Ra’am would prefer the current coalition headed by Lapid, but at the same time they are in no hurry to slam the door on any other future political partnership. In other words, they will continue with their strategy of playing the entire field rather than be limited to a partner with Lapid and the center left. Abbas himself said last May that a coalition with the Likud would be considered a genuine success for the new approach he took.

Strategic consultant Lior Chorev discussed this approach in a conversation with Al-Monitor. “Ra’am needs to operate in two stages,” he said. “The first stage is to make progress in the [current] coalition and become a full partner, including ministerial responsibilities. It should request ministries for the party as part of its coalition negotiations. Then, in the second stage, it should announce that it is reaching out to all parties to form a political partnership.”