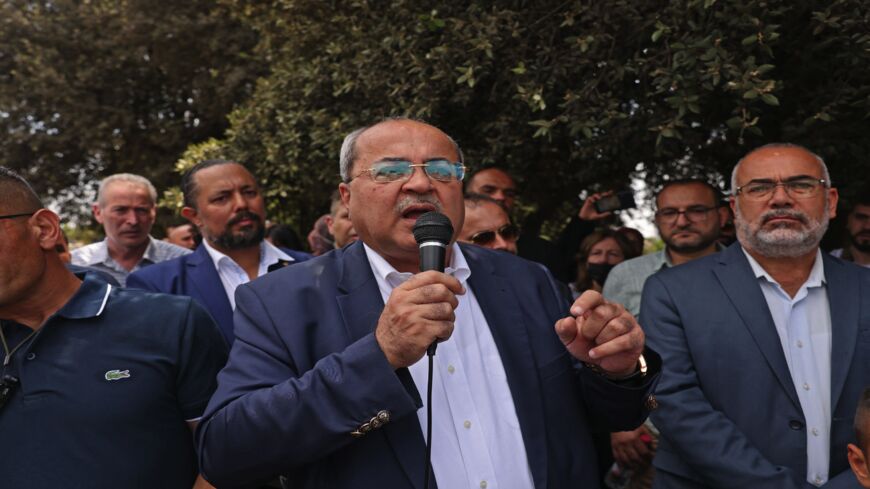 Ahmed Tibi (C), Israeli member of Knesset for the Joint List, speaks during a demonstration by Israeli Arabs ahead of a Knesset vote on the controversial Citizenship and Entry law outside the Knesset building in Jerusalem on July 5, 2021. - MENAHEM KAHANA/AFP via Getty Images

"If we bring them (the Arab Joint List) on board, it would place a burden on the budget. However, we will try to bring them along on issues that won’t affect the budget but are still important, like the Electricity Law," Ra’am Party chairman Mansour Abbas said Aug. 1.

Without knowing, Abbas was responding to a practical joke played on him by the ultra-Orthodox Kol Berama radio station during a discussion with an impersonator who presented himself as Finance Minister Avigdor Liberman. Still, his reaction was very revealing. His remarks came just a few days after a heated exchange in the Knesset between Ahmad Tibi of the Joint List (a unified slate of predominantly Arab parties) and Knesset member Walid Taha of Ra’am over proposed legislation that Tibi was trying to advance. The law concerns the supply of electricity to homes built without an occupancy permit, or a “Form 4” as it is known in the parlance of the Israeli legal code.

At the Knesset, Tibi was giving the impression that the proposed legislation was hitting a wall over a political battle for credits. Taha responded that it should be the coalition and not the opposition to advance the law (and get credit for that). He pointed that Ra’am is a member of the coalition while the Joint List is not. Tibi responded: To hell with the coalition. Let’s do this together.

Within hours, the exchange made its way to social media, where supporters of Ra’am clashed with supporters of Tibi and the Joint List. Safwat Frej, deputy leader of the Islamic Movement’s Southern Branch (affiliated with Ra’am), attacked Tibi on Facebook, writing, "He’s been in the Knesset for 30 years now, and he keeps himself busy by giving speeches. We’ve never seen a Form 4 or anything like that. These days, Arab Knesset members have a say in the government, thanks to Ra’am’s sophisticated behavior."

Tibi’s parliamentary aide Ahmad Darawshe was quick to respond: “Dr. Ahmad Tibi succeeded passing more than 20 laws and passed billions [of shekels in] budgets (half a billion over the last 5 years). With a raised head and a tall voice, without any concession, stuttering, no barter, no disguise for its origin and identity! … Your coalition allowed or voted against the law against the [family] reunion, against raising the budget of the army, against raising the gay flag in ministries and against renting the wombs to gay people instead of sharing their interest Your people.”

It didn’t end with that either. Ra’am responded too, posting, “Everybody knows that the coalition does not support legislation submitted by the opposition, so we will not support this law. On the other hand, the coalition does support the legislation submitted by Ra’am, so the law will pass within a few weeks.” Tibi then posted a Facebook video in an attempt to clarify his position by claiming that Ra’am vetoed his proposed legislation.

This is yet another example of the ongoing feud between Ra’am and the Joint List, which began when they ended their partnership right before the last March 2021 election. Ra’am decided to join the coalition, while the Joint List kept its traditional role as an opposition party. Now Ra’am is trying to present itself as the only party to benefit Arab society, but this means refusing to share credit for its achievements with its rival, the Joint List. For its part, the Joint List keeps trying to embarrass Ra’am by proposing all sorts of laws, which would make it difficult for the party to remain in the coalition. Ra’am has, in fact, learned the cold, hard truth that being part of the coalition is very different from being in the opposition. Now it has to get used to its new status.

Exacerbating the situation is the fact that Tibi is Israel’s most veteran Arab parliamentarian. In many ways, he built his reputation by being the most frequently interviewed Arab figure in the country’s Hebrew-language media. Inevitably, he also took part in numerous heated exchanges, most recently with far-right Knesset member Itamar Ben Gvir last week. What Tibi realizes is that in the past, his frequent media appearances may have increased his popularity among Arab voters, but that this has changed over the past few months. These days, Ra’am leader Abbas and the other Knesset members from Ra’am receive more media coverage than him. This can’t be easy for a media personality like Tibi. It certainly adds to the growing tension between the two parties.

What does the Arab society think about all of this? There are conflicting views, of course, proving yet again that Arab society has long stopped being a single, uniform bloc. Engineer Wissam Jaber of Taibe keeps tab on Israeli politics. He tells Al-Monitor, “I believe that as a minority we would be better served if we would consolidate our ranks and work together with full cooperation and coordination between the different parties. It is not right for us to weaken ourselves through all the conflicts we’ve witnessed over the past few weeks. We would be better served if we would unite to bolster our status and strength. I sincerely hope that we will see unity, so that one party can complement the other.”

At the same time, it is important to note that Ra’am’s political maneuvering has quite a bit of support on social media. In other words, not everyone is upset that Tibi’s new legislation failed to pass. Eyad Mawasi, a member of the Baqa al-Gharbiyye city council, told Al-Monitor, “Tibi knew that his legislation to connect those homes to the electrical grid would never pass, but he preferred to take credit for it anyway, making it difficult to work with the government. Only the coalition can achieve things and get the law passed. All you can do from the opposition is to cause a ruckus. In this case, it is clear that the real purpose here was to humiliate Ra’am, but the Arab society has matured over the past few years. It stopped buying into the tantrums, as is evidenced by the fact that Ra’am alone received four seats while the other three Arab parties received just six seats in total.’’

Mawasi claims that Arab citizens are fed up with all the sloganeering. "They are looking for action that leads to results, and as everybody knows, they have gained more influence by working within the coalition. For 20-plus years, the Joint List put on show after show. Now, a new player named Mansour Abbas has entered the arena and is providing them (the Arab sector) with a new address for their grievances. The government and the Hebrew media understand that now."