The Arab Ra’am party said clearly last night that they will try to be part of the next Israeli coalition, putting them at odds with the rival Arab Joint List. 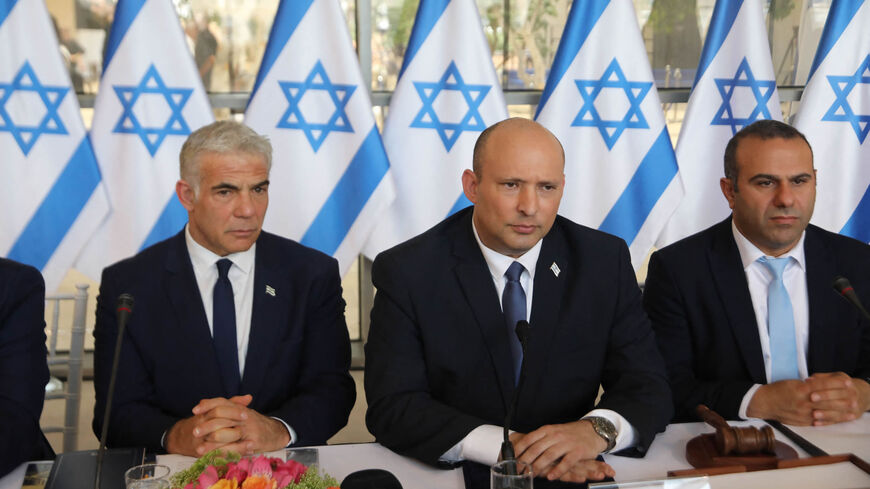 In the past few days, head of the Muslim Ra’am party Mansour Abbas was trying to find a solution over rebel legislator Mazen Ghnaim who was no longer voting with the coalition. Abbas continued his attempts just until the very last moment, when Prime Minister Naftali Bennett and Alternative Prime Minister and Foreign Minister Yair Lapid announced that they decided to disperse the current Knesset and call a new election. “We did our utmost to preserve this government,” said Bennett, undoubtedly referring also to the efforts of Abbas to keep his party members in line.

Evidently, Bennett and Lapid blame first and foremost Yamina rebel legislators for the forced decision. According to the rotation agreement, if the government falls because of Yamina members, Lapid will serve as interim prime minister during the transition period up until the new elections, and not Bennett. And indeed, this is what's happening now. Still, it is clear that Abbas regrets recent developments. In May, Abbas said unequivocally, “We won’t lend a hand for toppling the government or dispersing the Knesset.”

One question that leaves everyone wondering is what the Arab parties will do, now that it has been announced that the current Knesset will be dissolved next week.

On the one hand, there is Ra’am, which made history a year ago as the first Arab party to join a ruling coalition since the founding of the State of Israel. On the other hand, there is the Arab Joint List, which spent the last few months trying to bring the coalition down, if only to harm Abbas and put an end to Ra’am’s adventure in Israeli coalition politics.

Ra’am did have a hard time of it, too. The party faced all sorts of ups and downs, culminating in a decision last April to freeze its participation in the coalition over Temple Mount violence. Nevertheless, despite all the twists and turns, the party still received rather enthusiastic support from the Arab society.

Knesset member Ayman Odeh, head of the Arab Joint list, was quick to rejoice over the government’s decision to disperse the Knesset, which he tied to the occupation of the West Bank. He wrote on Twitter, “Its effort to keep the occupation in place are what brought the government down, as much as the government did everything to ignore it. Ending the occupation is in all of our interests. As long as it persists, we will not have democracy, stability or peace. There will be no equality or social justice.”

His Hadash faction colleague, Knesset member Aida Touma-Sliman, joined him in welcoming the government’s decision, even as she attacked its policies, saying, “This government implemented a radical right-wing policy of expanding the settlements, demolishing homes and implementing ethnic cleansing in the occupied territories. It tossed crumbs to the Arabs in exchange for them forgoing their most basic political principles. The government that called itself a government of change did not bring about any genuine, bold change.”

Knesset member Sami Abu Shehadeh of the Joint List's Balad faction, had his own succinct response to the news: “Thank God we’re done with them.”

While the members of the Joint List are celebrating the decision by the coalition’s leaders to dissolve the Knesset, their Ra’am party rivals are trying to relay a sense that everything is “business as usual,” that they are not afraid of yet another round of elections, even if they did whatever they could to maintain a stable coalition.

As a reminder, Ra’am leaders spent the last few weeks in talks with the recalcitrant Arab members of the coalition — Ghanaim of Ra’am and Ghaida Rinawie Zoabi of Meretz — in an effort to end the current crisis. And yet, as disappointing as it was to learn that the country was heading to another election, the chair of the Knesset’s Interior Committee, Knesset member Walid Taha of Ra’am, put on a bold face by tweeting, “We made and will continue to make history.”

In an interview with Israel’s Channel 12, Abbas rejected the notion of his party returning to the Joint List, saying, “Ra’am began this process [of integrating into the Israeli political decision-making process] and will continue with it. We are well in the midst of this process. In fact, we’ve only just begun. We want to be partners in the next coalition and have an impact on it. Anyone who wants to participate in Ra’am’s new approach to politics is welcome to join us.” Then he added, “But anyone who wants to play games over seats should know that we are not at that stage anymore. The Arab public is fed up with all those games. It wants to be an influencer.”

Asked about remarks by rebel Yamina Knesset member Nir Orbach, who said, “You [Ra’am] don’t want to be partners. This experiment with you failed.” Mansour responded, “He was the one who caused the process to fail. We proved until the very last minute that we are ready to make progress.”

More so, despite all the problems faced by Ra’am over the last year as part of the coalition, Abbas refused to give up. “This is a historic process,” he said during the interview. “It has enormous support among the entire [Arab] community. We brought about some amazing achievements for the Arab public, so that we can go back to them and say that we did it against all odds. We succeeded in function in a coalition, and a diverse coalition at that, made up of the left, the center and the right. All Israelis will see this as a historic opportunity.”

The problem is that while Abbas was sending out optimistic messages about his party joining any future coalition, opposition leader Benjamin Netanyahu said during a press conference, “I will not sit with Mansour Abbas. I did not sit with Mansour Abbas. The only thing we talked about was Ra’am’s support for the direct election of the prime minister.”

What do Ra’am’s supporters think about all this? Mahmoud Freij from the town of Kafr Qassem is a longtime Ra’am supporter with close ties to the party’s leaders. He told Al-Monitor, “Ra’am believed that it was just a matter of time before the Knesset was dissolved, but they didn’t think that it would happen so quickly. They thought that the next election would take place in March 2023. Senior members of the party said that they had no way of knowing exactly when — given the pressure campaign on Orbach [by the opposition, for Orbach to quit the coalition] — but they nevertheless have been preparing for the next election for a long time now and remain committed to their principles.”

Asked whether Ra’am would succeed in passing the electoral threshold, he said, “I believe that it will pass the threshold and maybe even increase its representation to five seats.”