Supporters of the coalition's Ra’am Party fear that if former Prime Minister Benjamin Netanyahu opts for a plea bargain and to exit politics, the government might disintegrate. 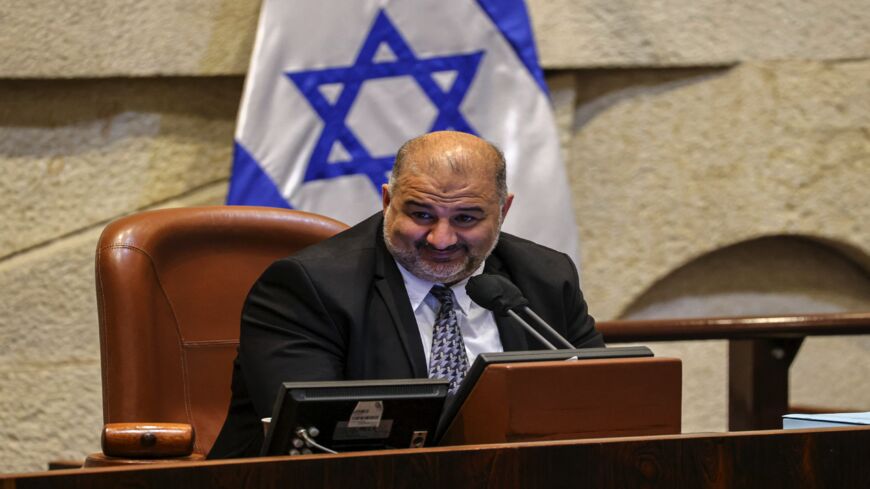 Mansour Abbas, head of the Islamic Ra'am Party, speaks in his capacity as Knesset deputy speaker during a plenum session on the state budget on Sept. 2, 2021. - AHMAD GHARABLI/AFP via Getty Images

Israel’s current coalition was established on the common denominator of toppling Benjamin Netanyahu from the premiership. Now, on the backdrop of rumors about Netanyahu considering a plea bargain in his graft trial and perhaps even exiting politics, coalition partners are worried about the future of their alliance. Within the numerous coalition parties, the Islamic Ra’am Party is probably the most worried.

Evidence of these concerns came up Jan. 16 at the weekly Cabinet meeting. Prime Minister Naftali Bennett opened the meeting with a special statement for the press: “… all of the various political analysts, with their graphs and scenarios, can rest assured. The government of Israel is working and will continue to work quietly and effectively, day after day, for the citizens of Israel."

Obviously, Bennett intended to allay the fears of his coalition partners. But did he really succeed?

One of the major questions hovering over the current coalition is the continued membership of Ra’am. As abovementioned, its lawmakers are an integral part of the coalition. With a narrow majority of 61 Knesset members out of 120, the government would have a hard time moving forward with legislation in the Knesset without them. This could even be impossible.

Evidence of this was seen in the defeat of the coalition’s Enlistment Law for ultra-Orthodox yeshiva students. Ra’am leader Mansour Abbas voted in favor of the bill. But it was the opposition of Knesset member Ghaida Rinawie Zoabi of the Meretz Party and the absence of Knesset member Mazen Ghanaim from Ra’am that caused the motion to fall in its first reading.

In response, an unnamed senior member of the government told N12 News that the behavior of some Arab Knesset members threatens the coalition’s stability. He then added that if this kind of behavior does not stop, it threatens the very existence of the coalition.

That is exactly the question that Israeli society in general and Arab society, in particular, have been discussing recently. Has the Ra’am Party reached the end of its historic role in the coalition?

Going back to the establishment of the current government, Ra’am’s inclusion in the coalition was an exceptional and courageous move by Abbas. After decades in the opposition, an Arab party broke the glass ceiling and took a seat at the table with all the other decision-makers. Very quickly, however, the members of Ra’am realized that it wasn’t that easy to be part of a coalition. Much like the Enlistment Law, and as I noted in an earlier article, they would frequently have no choice but to raise their hands and vote against their principles and pay a steep price for it.

Each such vote on the coalition side supplied Ra’am’s rival, the Arab Joint List, with ample ammunition to attack it. Competing over the same Arab electorate, the Joint List kept arguing that Ra’am’s Knesset vote track runs counter to the principles and ideals of the Arab public. This happened with the Citizenship Law, the Law to Fund the Ben Gurion Center and many more.

That being said, even if Netanyahu withdraws from politics, that does not necessarily mean that the Likud would be able to form a coalition the very next day. It is much more likely that they will spend the next few months electing a new party chair.

In the meanwhile, the government is hoping to expand its support. Some of its partners claim this is necessary in order to avoid any mishaps in votes with such a narrow majority. Still, such moves might also be pushed forward in order to weaken the leverage of Ra’am in particular. It has already been reported that Bennett’s Yamina party is discussing the possibility of adding several members of the Likud to the coalition. This would be based on a law passed by the previous Knesset by which four members of a party can break away from it to form their own Knesset faction without facing sanctions.

The one person who refuses to get overly excited by the new situation — at least in his public statements to the media — is Ra’am chair Abbas. In an interview with Arabic-language Mikan Radio, he said, “The end of the Netanyahu era could actually strengthen Ra’am’s role in politics because we will work to add new parties and new Knesset members to the coalition. We have already crossed the line by joining the coalition so that no one can ignore the very existence of Ra’am.”

What do people say about this in Arab society? Reda Jaber, a political activist from the town of Taibe, told Al-Monitor, “The Netanyahu episode has the potential to change the make-up of the coalition. It is important to understand that Israeli politics is fluid and based, for the most part, on personal interests. That is why, once some component of the coalition or other sees an option to dismantle the coalition to improve its position, it will. As soon as there is a chance that a majority of Jewish parties can form a coalition without Ra’am, it will happen. Furthermore, the price that Ra’am would have to pay to be part of a right-wing coalition is several orders of magnitude steeper than the price it is paying now. That is why its supporters will have a hard time being part of such a government in the future.”

A different approach was taken by Muzher Badir, a social activist from the town of Kafr Qassem. He told Al-Monitor, “It must be considered that Netanyahu’s resignation would result in a struggle in the Likud over who will head the party since many of its Knesset members consider themselves worthy of that position. That is why I believe that it will actually strengthen the current government in a short time. Of course, all that could change a year from now. That is why I think that Ra’am’s big headache shouldn’t revolve around how to remain in the coalition. It should focus on its base in Arab society, especially since its rivals won’t stop trying to harm and disparage it in the media and on social networks. This is especially effective since so many Ra’am supporters are afraid to endorse it publicly out of fear that the party’s Arab rivals will use that to cast aspersions on their loyalty to Arab society.”