Muslim Ra’am party leader Mansour Abbas is committed to supporting the coalition, but he's not sure his party members will follow him. 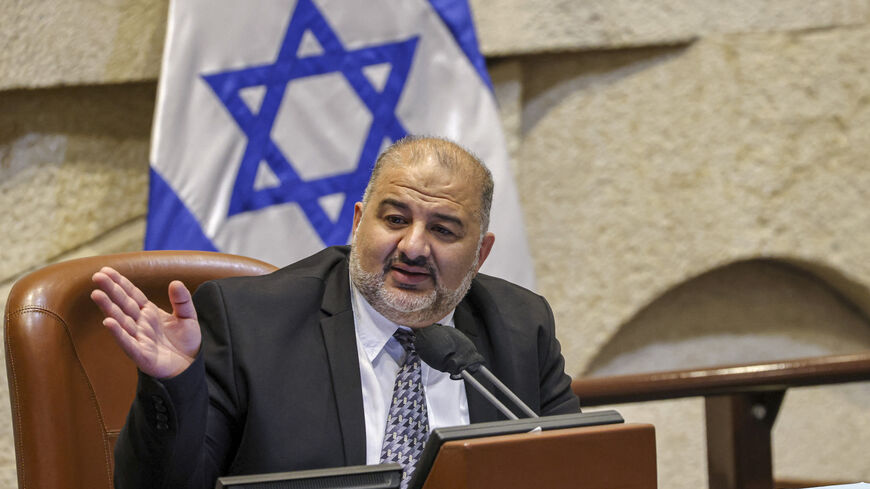 Mansour Abbas, head of Israel's conservative Islamic Ra'am party, speaks in his capacity as Knesset deputy speaker during a plenum session on the state budget on Sept. 2, 2021. - AHMAD GHARABLI/AFP via Getty Images

The past few days were difficult, and not just for Prime Minister Naftali Bennett with Yamina legislators rebelling against him, but also for Mansour Abbas, head of the Muslim Ra’am party. He too had to cope with a legislator refusing to toe the line with the policies of the government. To a large extent, the difficulties of Bennett and Abbas are intertwined and feed on each other.

The coalition had lost its narrow majority last April when Yamina Knesset member Idit Silman decided to join the opposition. Shortly after that, Bennett was forced to oust Yamina renegade Knesset member Amichai Shikli. Still, Bennett’s problems were far from over. In a surprise move last month, Meretz Knesset member Ghaida Rinawie Zoabi announced she was also quitting the coalition. After much negotiation, she decided to come back but did not promise to support government bills.

Despite this turmoil, the government went ahead this week with controversial votes, including the renewal of emergency regulations on Israeli criminal law implemented in West Bank settlements. Ra’am legislator Mazen Ghnaim and Meretz’s Rinawie Zoabi voted against extending the regulations. Three other Knesset members from Ra’am, including Abbas, absented themselves from the plenum at the time of the vote.

Failure of passing the regulations infuriated some Yamina members, leading to hints by associates of Knesset member Nir Orbach that he was in contact with the Likud and considering leaving the coalition. Reportedly, Orbach’s deliberation on whether to resign from the coalition was born out of frustration over the coalition’s inability to function properly and pass laws, and especially over the vote of Ghnaim and Rinawie Zoabi.

If that was not enough, on June 8 the opposition succeeded in passing in a preliminary reading a law to raise the minimum wage to 40 Israeli shekels an hour, with 23 supporters (among them Rinawie Zoabi) against four opponents (among them the prime minister). Members of the Knesset from the left-wing parties in the coalition — Ra’am, Meretz and Labor — refused to oppose the law, adopting various tactics to allow the law to pass.  Ra’am, for instance, announced ahead of time that it would support the law. Labor members of the Knesset left the hall.

Reports in recent days say the leaders of the coalition would like to see Ghnaim and Rinawie Zoabi quit the parliament, to be replaced by more "obedient" legislators. But these Knesset members refuse to cooperate with the plan.

Ghnaim tweeted, “I cannot cancel myself to ensure the survival of an embarrassing coalition.” Rinawie Zoabi tweeted, “My obligation is to be on the right side of history by not legitimizing the occupation and by supporting the basic right of the Palestinian people to establish a state alongside the State of Israel.” As the chairman of her party, Health Minister Nitzan Horowitz quickly tweeted in response with a sharp, clear message to the recalcitrant member of Knesset, “Whoever can’t withstand complications can quit their job.” Regional Cooperation Minister Esawi Frej of Meretz also criticized his party colleague: “She messed up. She wanted to keep her head up, very nice — the coalition doesn’t suit you, take yourself out of it, thank you. In a coalition there are compromises, you can’t take whatever you want.”

The person trying to block the pressure put on Ghnaim is none other than Abbas, who said in an interview to the Israeli news website Ynet, “Every member of Knesset is sovereign to himself; he is an elected official, and only he decides whether to resign or stay.  Every member of Knesset in the coalition should lend a hand and help the coalition withstand this and the government to survive.” He added, “We are in the coalition for the first time, and Ra’am has proven until now that it is a partner that can be depended on. This is an isolated incident with Knesset member Mazen Ghnaim that can be solved. The issue of resignation depends on him alone.”

A June 9 report from Haaretz sheds some light on the corner Abbas has been pushed into. Citing unnamed sources, the report said Abbas asked Ghnaim to make a decision whether he intends to stay in the Knesset or run for the position of Sakhnin mayor. Reportedly, Abbas told Ghnaim that if he decides to stay, he (Abbas) expects him to toe the line with the party's position and support the coalition. However, Abbas acknowledged that he cannot force Ghnaim to resign and that they are maintaining a dialogue, not engaged in ultimatums.

Reacting after Ghnaim’s vote, Orbach addressed Ra’am: “The experiment with you failed.” His question brought again to the spotlight the dilemma of whether it is possible to include an Arab party in the coalition because of the impossible situation some Arab legislators face when they are forced to vote against their principles and in opposition of everything they stood for in the past.

Abbas constantly tries to broadcast to his coalition partners that Ra’am is not the problem. He keeps reminding that it was Yamina members who resigned so far from the coalition, robbing it of its majority. Still, if Ra’am no longer speaks with one voice — that of Abbas — the coalition might not last long, and perhaps the party itself also might not last.