Now that Meretz Knesset member Ghaida Rinawie Zoabi has quit the coalition, the interim balance of power has shifted to the right. 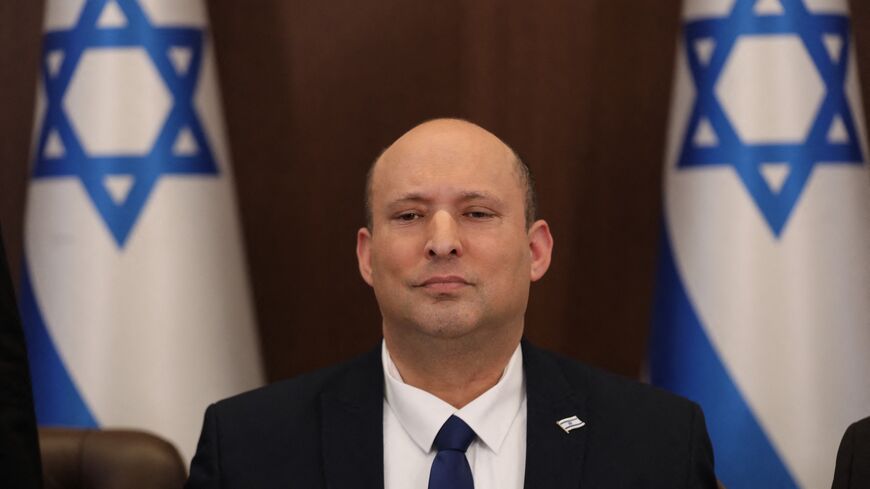 Israeli Prime Minister Naftali Bennett (C) attends a cabinet meeting at his office in Jerusalem on May 15, 2022. - ABIR SULTAN/AFP via Getty Images

Israeli fighter pilots have a saying that means the greatest threat you face is the one you cannot see. It's particularly apt in the latest crisis rattling Israeli politics.

Prime Minister Naftali Bennett and his alternate, and Foreign Minister Yair Lapid, have been feverishly fighting to stem further defections from the right-wing flank of their rickety government coalition and preventing the Islamist Ra’am party from bolting as well. They were preoccupied by tightening control over Bennett’s shrunken Yamina and pursuing deals for support from outside the coalition with the opposition Joint List and perhaps ultra-Orthodox opposition lawmakers. But the latest blow landed from a completely different direction.

On May 19, Knesset member Ghaida Rinawie Zoabi of leftist Meretz announced she was quitting the coalition. Her stunning move, of which she did not give advance warning to her party leader or colleagues, leaves the eight-party coalition with only 59 seats in the 120-member Knesset, which means that she could vote May 25 with the opposition to disperse the Knesset. Rinawie Zoabi would thus provide opposition leader and former Prime Minister Benjamin Netanyahu the votes he needs to call new elections and bring down the “government of change” that replaced him almost a year ago.

A member of Israel’s Arab minority, Rinawie Zoabi was a rising star in the Zionist Meretz party who championed Jewish-Arab co-existence. Party leader Nitzan Horowitz had circumvented the Meretz primaries to place her high on the list of Knesset candidates before last year’s elections in order to ensure gender parity and strengthen the party’s standing among Arab voters.

It now seems that in his enthusiasm, Horowitz forgot to check Rinawie Zoabi’s commitment to Meretz, a mistake for which he could pay dearly. Not only is her resignation likely to dismantle the coalition, it also poses a serious threat to voter support for Meretz and to future membership in the Knesset after the next elections. A significant number of Meretz voters can be expected to be outraged by the party’s role in bringing down the government, into which it squeezed last year following a long exile on the opposition benches, and reviving the prospects of Netanyahu’s return to power.

Rinawie Zoabi, an independent-minded social activist, was identified as a potential rebel when she voted in January against a bill on military conscription authored by Defense Minister Benny Gantz. Lapid, realizing her troublemaking potential, offered to appoint her as Israel’s consul general in Shanghai, a post that would have made her the highest-ranking Arab woman in Israel’s foreign service. Rinawie Zoabi accepted and Lapid must have considered the problem solved, only to be disabused of the notion last week.

With Rinawie Zoabi’s diplomatic appointment caught up in the bureaucratic machine, as she saw the coalition’s mounting woes, she must have realized it could well collapse before she made it to Shanghai. Citing her anger at Israel’s policies on Al-Aqsa Mosque and the killing of iconic Palestinian Al Jazeera reporter Shireen Abu Akleh, she quit the coalition but not the Knesset.

Her resignation not only threatens the government’s survival and presages new elections, it will also determine the identity of Israel’s transitional prime minister if the Knesset is dismantled. The quasi-constitutional law that underpinned the formation of the job-sharing Bennett-Lapid government last June stipulates that if the coalition is dismantled and early elections are called, the transitional government would be led by the head of the coalition bloc that was not responsible for the government’s collapse.

The law means that if the coalition had been dismantled by the two previous defections of Yamina lawmakers (coalition whip Idit Silman and Amichai Shikli), Bennett would have been forced to step aside and let Lapid become interim prime minister. But Meretz is part of Lapid’s center-left bloc in the coalition and if Rinawie Zoabi’s resignation results in the dismantling of the Knesset, the hopes of the centrist Yesh Atid leader of assuming the premiership even for an interim period would be dashed. Bennett, who has not served even half of his term, would continue to govern.

Israel’s previous transition government served for almost 18 months through three inconclusive elections that left Netanyahu in power until he convinced Gantz to dismantle his alliance with Lapid and join him in a job-sharing coalition government in April 2020.

The precedent it set as Israel’s longest-serving transition government means Bennett, too, could survive as Israel’s interim leader for months. If the election produces a tie, the interim government would stay on with full power until the next election, and so on.

Meanwhile, following Silman’s resounding April 2 resignation as coalition whip and the shock of Rinawie Zoabi’s decision, Lapid appears to have been successful in keeping her in the fold for now. In interviews on May 20, the lawmaker appeared to step back from the brink, announcing that she would probably not vote next week with the opposition on dismantling the Knesset and bringing down the government.

But Bennett and Lapid know they cannot rest. “This could all be psychological warfare,” a senior coalition member told Al-Monitor on condition of anonymity. “She may be coordinating with Netanyahu’s people and trying to ease the pressure on her until next Wednesday’s vote, at which time she will cast her vote in favor of early elections, and once we find out, it will be too late.”

Israel’s legal system does not allow those at the helm to relax for even a minute. The time remaining until the May 25 vote is an eternity in Israeli political terms. The immediate fire has been doused, but its embers could start a far greater conflagration, incinerating what remains of the coalition — this coming week or down the line.