Israel’s coalition paralyzed even as legislator backtracks from resignation

Coalition leaders managed to persuade Ghaida Rinawie Zoabi to go back on her resignation, and succeeded in passing the bill on tuition for IDF veterans, but the government is still very fragile and deep in crisis. 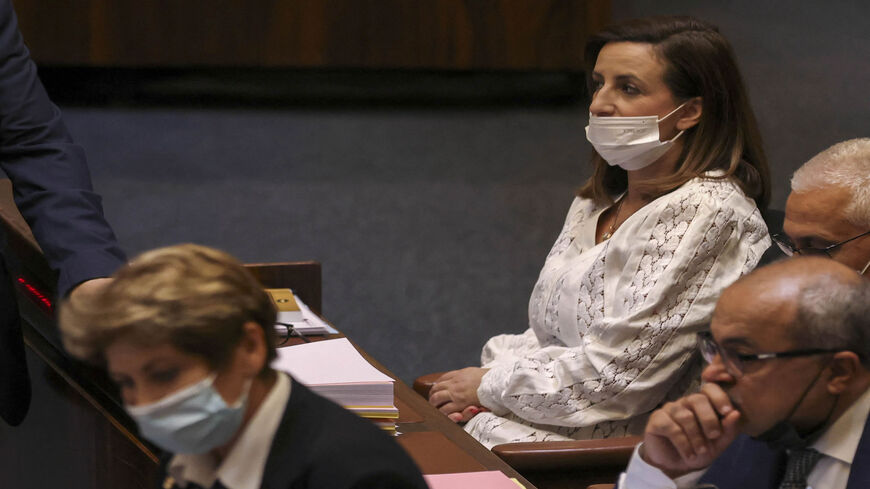 Ghaida Rinawie Zoabi (R), an Arab-Israeli lawmaker and member of the Meretz party, attends a session in the Knesset, Jerusalem, Nov. 3, 2021. - Ahmad Gharabli/AFP via Getty Images

It happened sometime around midnight on May 23. After many long hours of debates and clashes between the coalition and the opposition in the Knesset plenum, a compromise was finally reached, and the Scholarships for Veterans Bill passed its third reading.

The law, which provides an academic scholarship to Israel Defense Forces (IDF) veterans, highlighted the challenges faced by a minority government. Defense Minister Benny Gantz’s original proposal had the government funding 66% of tuition for newly discharged soldiers, who fought in combat units. The problem was that there was no way to pass the law, due to opposition from Arab members of the coalition. In other words, if it was to pass, the law would need support from at least some members of the opposition.

The two sides fought over it for a week. On the one hand, the Likud under former Prime Minister Benjamin Netanyahu’s leadership declared that they have no plans to support a coalition that relies on the votes of Arab Knesset members, who are opposed in principle to IDF troops. And yet, while it is the role of the opposition to challenge the coalition and attempt to topple it, the IDF remains a part of the consensus among Israelis. It is, therefore, hard to explain doing something that might hurt it.

This was the background for the campaigns that took place over the last few days on the backs of the troops themselves. Opposition leader Netanyahu led the forces opposed to the new legislation. For one brief moment, he actually seemed to have a good argument against it. He posted on Twitter, “If the coalition wants to help the troops, then it would fund 100% of their tuition. In that case, we promise to support the bill.” The argument received a level of support in the wake of the crisis within the coalition, when Knesset member Ghaida Rinawie Zoabi announced that she was quitting the coalition. She later withdrew her resignation upon receiving promises of new budgets for the Arab sector that she represents.

The incident revealed the deep crisis facing the coalition, which, for three days, was officially a minority government of 59 Knesset members out of 120. Still, even after Rinawie Zoabi returned to the coalition, it could not pass this legislation to benefit the troops. The Likud opposition escalated May 23, when Netanyahu announced to a meeting of the Likud faction that his party would only support the legislation if it offered 100% funding for the troops. For the rest of the day, Netanyahu waged a relentless social media campaign, attempting to present the coalition as not Zionist. So, for instance, Netanyahu posted pictures of Arab Knesset members Rinawie Zoabi, Arab Joint List’s Ahmad Tibi and Ra’am party’s leader Mansour Abbas, captioned by the words "hundred percent," with a fourth picture showing an IDF soldier, captioned by "66 percent."

In the end, however, it was the Likud that was humiliated. In recordings from the party meeting, former Minister Miri Regev could be heard saying, “We decided as a party that we’re going to be a fighting opposition and that we want to bring down this government. So, don’t get queasy [voting against] soldiers or battered women or cases of rape.”

Suddenly, the Likud appeared to be a party with no moral compass, with no sense of responsibility or even pity for the weakest sectors of society. The coalition put the leak to good use for the benefit of their own campaign. Foreign Minister and Alternate Prime Minister Yair Lapid quoted Regev in his Twitter feed, adding, “Politics at the expense of our troops is a sign of them losing any sense of propriety and having no moral bottom. It is now Netanyahu and the opposition against soldiers who served in the IDF. It’s disgraceful!”

Nevertheless, the Likud persisted with its hawkish approach until right before the vote. In the end, it was Gantz who saved both parties. Shortly before midnight, he offered a compromise by which tuition funding in the bill would be increased to 75%. Knesset members from the Likud absented themselves from the vote and the law passed.

So, who won? Both sides claim that they came out ahead. “We did it,” tweeted Prime Minister Naftali Bennett.

Netanyahu responded with a tweet of his own, saying, “Dear soldiers, thanks to our concerted effort, funding went up to 75%. When we return to power, it will be 100%. We love you."

The bottom line is that both sides compromised, having realized that this fight only ended up hurting both of them. Instead, each of them could present the kind of victory that would help them with their base.

When the dust settles in the Knesset, however, the real picture becomes much more apparent. The coalition is in a state of chronic crisis. It survives from day to day, because it doesn’t have a majority even after the return of Rinawie Zoabi. In other words, it is effectively paralyzed. When it comes to certain laws pertaining to the IDF and security, it can no longer rely on itself. Evidently, this situation cannot last for long. It forces the coalition to fight for its survival on a weekly basis.

Furthermore, even after Rinawie Zoabi’s surprising decision, there is no guarantee that she will not quit again. She did not show up to the Meretz party meeting May 23, and she did not vote to support the Scholarships bill.

During this crisis, Bennett was weakened in many other ways, too. On May 23, a senior official in the prime minister’s office, Chief of Staff Tal Gan-Tzvi, stepped down after serving Bennett loyally for the past decade. Gan-Tzvi was his political enforcer. This followed the resignation of Bennett’s political adviser Shimrit Meir on May 13.

As of now, the prime minister of Israel has no functioning office. To make matters worse, he is not gaining any momentum in the polls, his party is facing an existential crisis, and it looks like the most powerful person in the government is actually Lapid. It was the latter's efforts that brought Rinawie Zoabi back into the coalition, resolving the crisis for now.

While the opposition led by Netanyahu has not yet managed to bring the government down, time is on its side as long as it remains united. The former prime minister is still performing well in the polls, the Likud is still the largest party in the Knesset and by a wide margin at that, and polls suggest that it would win 35-36 seats if an election was held now. In contrast, Bennett’s party would win six seats on a good day. It is good polling stats that help Netanyahu keep the opposition bloc of right-wing parties and the ultra-Orthodox intact.

Behind closed door, the leaders of the coalition are well aware that they are living on borrowed time. They are just trying to postpone the inevitable. A fight between Bennett and Lapid over who will head the transition government is also brewing behind the scenes. Based on the coalition agreement, if the left-wing parties or Ra’am cause the government to fall, Lapid will not become prime minister. For him to enter the most important office in the country, it will have to be the right-wing parties that bring the coalition down.

Israel’s political crisis continues. The way it seems now, the nonconfidence vote scheduled for May 25 will be postponed. But that does not mean it will not be rescheduled for the very near future.