Announcing that the renewal of regulations on Israeli civil law in West Bank settlements is a test for the coalition's viability, Justice Minister Gideon Saar pushes his own government into a dangerous political spiral. 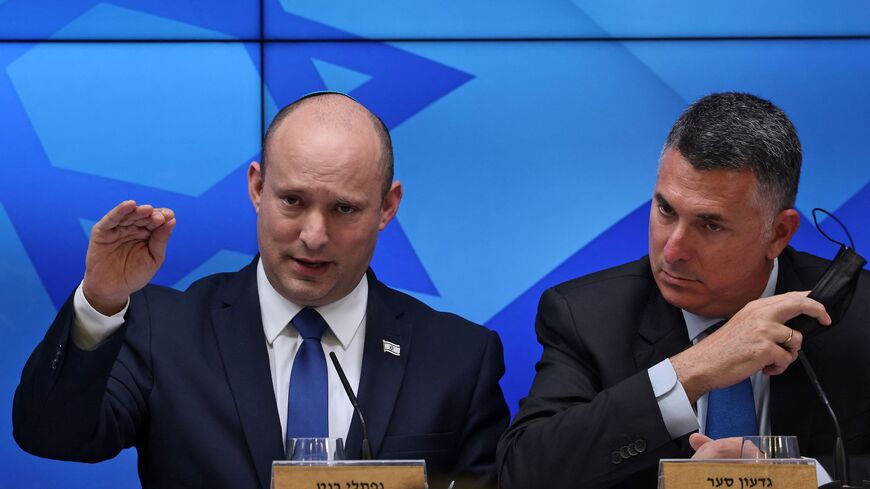 It should come as no surprise that the coalition is about to face another tense week. The current crisis, however, could result in the collapse of the government as early as next week.

At the center of the latest crisis is Justice Minister Gideon Saar, chair of the New Hope party. Until recently, Saar has been viewed as a moderate, capable of maintaining the delicate balance in the shaky coalition. His coalition partners are not so sure now that this is still the case.

Last month, Saar failed to obtain a majority within the coalition to renew regulations that extend Israeli criminal and some civil law to Israelis residing in the West Bank. These regulations were originally adopted by the Knesset in 1967, right after the Six-Day War, as emergency measures. Because of the sensitivity of the issue, Israel’s parliament never changed the emergency status of these regulations, which means they must be renewed every five years. The last time was in 2017. Thus, the regulations are set to expire at the end of June. Without them, Israelis living in settlements will come under the authority of the Israeli military authorities, much like Palestinians residing in West Bank Area C.

Until 2017, these regulations were extended routinely by every Israeli government, Right or Left. This time, however, the situation is different. The coalition is composed of a great variety of parties, including an Arab one. Furthermore, the coalition lost its Knesset majority in April. Right now, the Islamist Ra’am party and Arab Knesset Member Ghaida Rinawie Zoabi of Meretz are opposed to renewing the legislation, which they say provides tacit approval of the Israeli occupation of the West Bank.

The question now is whether they will show enough flexibility to save the coalition. We will know that on June 6, when the Knesset is set to vote on the issue. Symbolically, perhaps, June 6 will also mark a full year since the coalition was formed.

On June 1, Saar announced in a television interview blitz that he intends to bring the regulations up for a vote in the Knesset without delay, and that this would be a test of the coalition’s continued viability. The threat was obvious to everyone.

And there are other problems on the horizon as well. The former head of the coalition, Knesset Member Idit Silman of Yamina, is signaling that she intends to vote against the legislation. While Silman has resigned from her role in leading the coalition and has been cooperating openly with the Likud, as a Knesset member, she is still part of the coalition, at least officially.

This is yet another crisis revolving around a law which Ra’am has difficulty supporting for ideological reasons. It proves how the coalition has been living on borrowed time. The last time there was a crisis like this, the opposition saved the coalition. In that instance, the Likud supported legislation to provide academic scholarships to combat troops upon their discharge – after Ra’am refused to support the bill. This time, however, opposition leader Benjamin Netanyahu announced that he would not be saving the coalition again, and that he would act to bring it down without delay.

Given all of this, the current situation is, perhaps, the most severe crisis yet, faced by a battered and exhausted coalition without a majority.

Overall, the mood in the coalition is despondent. The tension and suspicions among its members can no longer be hidden. Senior members criticized Saar for causing an unnecessary crisis.

That is why people suspect that Saar plans to join forces with the Likud to bring the government down. In his interviews, Saar denied that he was in talks with the Likud, and said that his original position has not changed: in other words, he will not sit in a government led by Netanyahu. Still, quite a few in the coalition have their doubts.

These doubts certainly put the pressure on Prime Minister Naftali Bennett and Foreign Minister Yair Lapid. They have also heard the rumors and seen the reports that Saar’s right-hand man in the New Hope party, Minister of Housing and Jerusalem Affairs Ze’ev Elkin, has already laid the groundwork for a return to the Likud. Like Saar, Elkin quit the Likud. They are both considered sly politicians too, which is why people close to Bennett worry that Saar is setting a trap for him, and that he really does plan to bring the government down if the law does not pass.

According to the coalition agreement, if the right-wing New Hope party does bring down the coalition, Lapid automatically takes over from Bennett and becomes prime minister. This scenario could be Bennett’s greatest fear.

So, what is Saar really planning?

It looks like he also feels that he paid a steep price electorally for joining this coalition. Polls show his party on the verge of being wiped out in a new election. Apparently, what he is doing now is attempting to regain relevance, if and when elections are called. Being part of a coalition with Ra’am was detrimental to him among his rightwing ideological base. Saar could be trying to distance himself from this.

On the other hand, the chance of Saar joining forces with Netanyahu still seems unlikely, especially given his recent charges that Netanyahu is behind all the toxicity he received on social media.

In a video call this morning with supporters of his New Hope party, Saar reiterated his demand for all coalition parties to back his bill, stating that “if the coalition doesn’t get a grip on itself, there will be consequences. It really endangers the continued existence of the government.” At the same time, he also reiterated that he has never negotiated with the Likud to join the opposition, despite their many offers to him, nor does he intend to do so. In fact, Saar bashed Netanyahu for refusing to support the bill, accusing him of “cynicism and irresponsibility.”