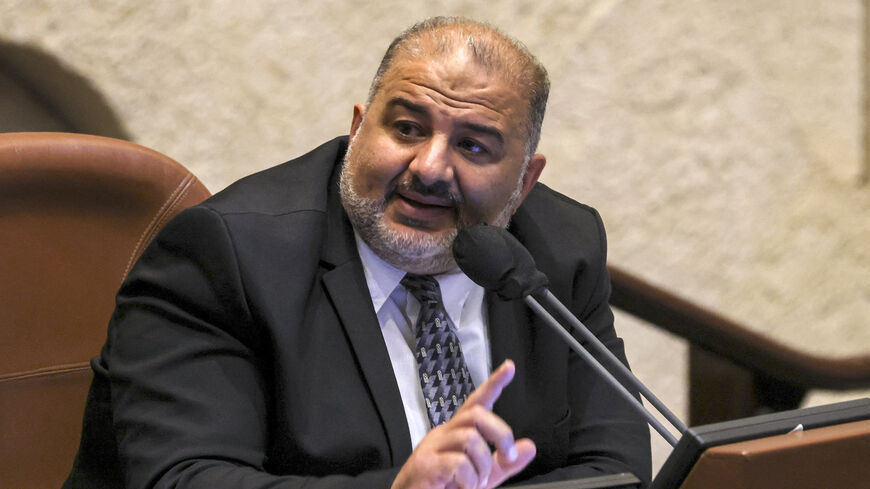 “We will not give up until the very last moment. We will try until then to prevent the Knesset from being dissolved. I think that we can find a solution, which will enable us to continue functioning,” said Mansour Abbas, leader of the Ra’am party, in a June 19 interview with the Walla news site.

Evidently, Abbas was trying to relay a sense of optimism and to convince his listeners that the coalition could get through the endless series of crises it has faced over the last few weeks. These included the April 6 announcement by Knesset member Idit Silman of Yamina that she was leaving the coalition, the May 19 refusal of Knesset members Mazen Ghnaim of Ra’am and Ghaida Rinawie Zoabi of Meretz to support the extension of the emergency regulations applying Israeli law to West Bank settlements and the announcement by Knesset member Nir Orbach of Yamina, a close confidant of Prime Minister Naftali Bennett, that he no longer considers himself a member of the coalition.

Israelis are now focused on the question of whether the country is headed to a fifth election in just three years, or whether it can overcome the recent crises, even if that means a government that is treading water and unable to pass any meaningful legislation.

Against this backdrop, the leader of the New Hope party, Justice Minister Gideon Sa’ar, sent a message to Orbach stating that he has no plans to join an alternative government in the current Knesset, headed by opposition leader Benjamin Netanyahu. If Orbach does anything to dissolve the current government, it would mean a new election.

On the morning of June 20, the Likud party indicated it will submit a nonconfidence vote against the government June 22, though reports say the party has to come up still with the necessary majority to conduct such a specific vote.

Given all this chaos, the question is: What will happen with Ra’am, the Arab party that made history last year by joining the coalition? Will it manage to survive its long odyssey in the coalition, with all its ups and downs, and remain a united party?

The way things look now, Abbas may be incredibly popular among Jewish and Arab Israelis alike, but he has not been able to control his party like he once did. Proof of this was Ghnaim’s act of open rebellion by refusing to support the extension of the emergency regulations in the settlements.

Rinawie Zoabi acted similarly against her own party, Meretz. Still, reactions in the home parties of these two Arab legislators were considerably different.

Rinawie Zoabi had retracted from her decision to quit the coalition, but her colleagues are still infuriated with her. On June 19, Meretz leader Health Minister Nitzan Horowitz called on her to resign her seat. He argued that anyone who acts against the will of the party and the coalition is contributing to the return of Netanyahu to power, with his far-right allies Bezalel Smotrich and Itamar Ben-Gvir.

In fact, already on June 16, Horowitz expressed his regrets over including Rinawie Zoabi on the party list in the first place. He declared, “From now on, seats will no longer be reserved for different sectors. The list will be made up of whomever voters choose in the primaries.”

In contrast to the angry reactions by Meretz against their own legislator, Ra’am has taken a very different approach toward recalcitrant Ghnaim. It has not asked him publicly to resign. In fact, it embraced him in the media, even if it is working behind the scenes to force his resignation. The party believes that if he resigns, Rinawie Zoabi will follow suit and resign as well. The two will then be replaced by more amenable Knesset members, giving the coalition the 60 seats it needs to pass the Settlement Regulations extension, which caused the crisis in the first place.

Evidence of these efforts behind the scenes could be found in a June 12 statement by Ala’a Jabareen, who holds the sixth-place spot on Ra’am’s Knesset list. According to party regulations, Jabareen would replace Ghnaim in the Knesset if he quits. But Jabareen opposes the policies of the coalition. Toeing in line with the party’s leadership, Jabareen resigned from the sixth place. Now, if Ghnaim decides to resign, the person who will replace him will be the one who was originally the number seven on the list — someone more supportive of the government’s policies.

In a discussion with Al-Monitor about the current state of affairs in Ra’am, former Labor party Minister Raleb Majadele said, “Mansour Abbas still controls whatever happens in Ra’am. The party’s Shura Council supports him and his moves. Knesset member Mazen Ghnaim is doing whatever is in his personal interests, so that he can return home to the position of mayor in the town of Sakhnin, even if this means acting differently from the members of his party, who are part of the coalition.”

Majadele added, “Ghnaim has the same right to act out of personal interests as did Knesset members [Amichai] Chikli, Orbach and Silman of Yamina. On the other hand, it is important to remember that he has stated that he has no intention of harming Ra’am. If he goes all the way against his party, he could lose Ra’am’s support in the municipal election. He knows that Hadash [Arab faction that is part of the Arab Joint List] already has a candidate there to run against him.”

Ra’am party Mayor of Kafr Qassem Adel Badir is also critical of the party’s rebels. In an interview he gave June 16 to Radio Kan he said, “Abbas is creating a new path forward. Ghnaim knew that this was his [Abbas’] policy and approach … and yet, he [Ghnaim] decided to join the party.”

Despite all the crises facing the coalition, it appears that Ra’am’s electorate has not lost faith in the part, and that it will continue to support it. This is evident from a poll by the Israeli Institute for Democracy, which found that some 66% of people who voted for the party are pleased with what its representatives have managed to achieve in the Knesset. This is in sharp contrast to the 44% of voters for the Arab Joint List, who say that they are pleased with the way that they are being represented. What this seems to say is that despite all the difficulties, there are still large parts of the Arab sector who want to remain part of the coalition.