Israeli Defense Minister Benny Gantz and Justice Minister Gideon Saar know that if they want to establish the next government, they must partner with the ultra-Orthodox parties, at whatever cost. 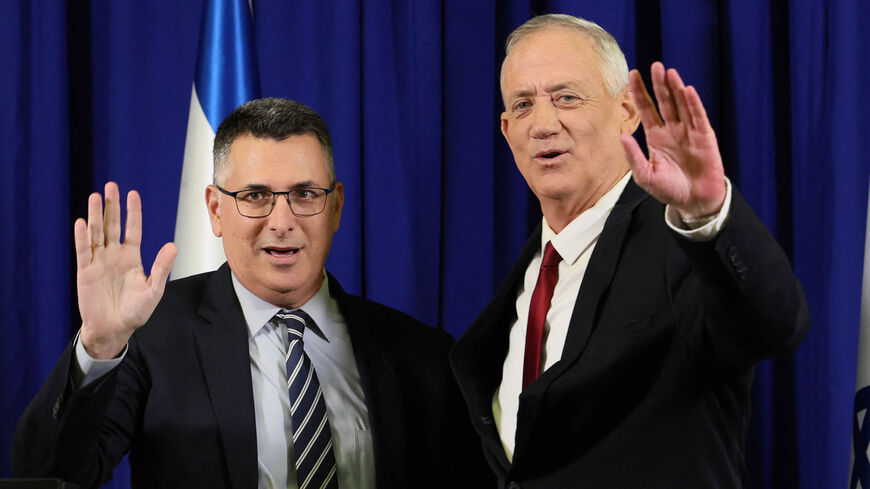 An old-new party, which is likely to run in Israel’s upcoming election, could add a certain level of disarray to the established political map, with its clear division into right and left blocs. The party is new because this is the first time it is running. It is old because the new list is actually the result of a July 10 merger between two established parties: Defense Minister Benny Gantz’s Blue and White and Justice Minister Gideon Saar’s New Hope.

The name for the new party is hardly original. It will be running under the combined name of “Blue and White - New Hope.” What is original is the alarm bells it is setting off among established politicians on both sides of the political divide. Prime Minister Yair Lapid is worried about the new party, but so is opposition leader Benjamin Netanyahu on the right.

Netanyahu is the country’s uncontested expert, when it comes to riling up the right-wing bloc against anyone perceived as being a “leftist.” His problem is that he will have a hard time painting Saar and Gantz as such. Meanwhile, the fact that Gantz and Saar are assuming ownership of the “center” forces Lapid to shift closer to the left. Taken together, what this ultimately means is that Lapid and Netanyahu will have a common rival in Gantz and Saar’s new party. It is increasingly reasonable to assume that they will direct a good part of their electoral campaign attacks at it.

But Netanyahu has even more reason to worry. Upon merging his own party with Saar’s, Gantz began polling in the double digits, with 13-14 Knesset seats for the united party. In practical terms this means that Gantz can think seriously about occupying the prime minister’s office.

Before that can happen, however, another dramatic development must occur. In order to build a stable coalition, Gantz and Saar will also have to form an alliance with the ultra-Orthodox parties. According to the latest reports and recent developments on the ground, such an alliance, once deemed inconceivable, is becoming enough of a reality that it cannot be ignored.

In order to understand how such a development could be feasible, we must go back to the elections in 2021. When results were announced, Netanyahu celebrated his alleged victory in Tel Aviv’s Exposition Center, while Saar delivered his “concession speech.” Netanyahu was already announcing that he would be forming the next government and started calling on his natural partners to join him. Meanwhile, pundits were eulogizing Saar. The six seats that he won did not meet the high expectations of the pollsters, who predicted that his New Hope party would control no less than 15 seats.

A few days later, it became apparent that Saar’s defeat was just temporary. Saar, together with former Likud senior Zeev Elkin, may have only won six seats, but they compensated for that with wily political sophistication. In the end, they were “groomsmen” and “godfathers” to the unanticipated Bennett-Lapid coalition.

The new government may have lasted just under a year, but in that time, Saar and Elkin were the glue that held it together. While Minister Bennett’s own Yamina party started to crumble and three of its members — Amichai Chikli, Idit Silman and Nir Orbach — went their separate ways, Saar’s party coalesced around him.

Even when the coalition fell apart, Saar remained true to himself and insisted on looking ahead to the future. For him, this was a game of chess. He realized that he would have to sacrifice some of his pieces if he was to make any progress. In this particular instance, he sacrificed two of his most important pieces in order to appease the people who seemed likely to join the next coalition under almost any circumstances, i.e., the ultra-Orthodox parties.

So Saar sacrificed two of his most loyal soldiers — Minister of Communications Yoaz Hendel and his friend and ally Zvi Hauser. (They constitute together the Derech Eretz Knesset faction, which split from Blue and White, then joined New Hope.) They were both senior members of the right-wing bloc, who defected to the “Anyone but Netanyahu” camp and joined forces with Saar. (Hendel was Netanyahu’s spokesman, while Hauser was Cabinet secretary.) Then came the moment of truth, when Saar’s New Hope party merged with Gantz’s Blue and White. Suddenly, Hendel and Hauser found themselves abandoned in a political desert, with no party that they could call home.

They weren’t marginal figures either. Hendel can claim responsibility for several of the Bennett-Lapid coalition’s major achievements, including pushing ahead with plans to connect the entire country to the fiber optics network. Furthermore, no one questions the fact that his tenure in the Communications Ministry was both professional and successful. On the other hand, it was no secret that Hendel was a red flag to the ultra-Orthodox sector.

The reason for this is that Hendel also spearheaded a reform that was intended to do away with ultra-Orthodox rabbinical control over the cellphone market and eliminate the “kosher phone” (restricted to avoid what is deemed by the rabbis as inappropriate) entirely. The ultra-Orthodox saw this as a serious attack on them and their values. In what was seen as a rare step, its leaders actually went to Hendel’s office, hoping to convince him to change his mind and abandon his reform. When he refused to walk it back, they declared all-out war against him.

A senior member of ultra-Orthodox United Judaism told Al-Monitor on condition of anonymity, “Let it be perfectly clear: United Judaism will align itself with Netanyahu. It is our goal to form a government with Netanyahu. We will do whatever it takes to ensure that Netanyahu has more than 61 seats. Furthermore, we also agreed to establish a mechanism that would coordinate between the campaign headquarters of the Likud, the Religious Zionists, Shas and us, so as to maximize the number of votes for the right and ensure that interparty activities do not cause the right to lose votes.”

That same senior official also explained that when they informed Saar of this, they added one condition: Under no circumstances would they accept Hendel on Saar’s future party list.

“We made it perfectly clear to him that Hendel attacked what we consider to be the ‘heart and soul’ of ultra-Orthodox Judaism, and he will pay the price for that. Saar tried to make some sort of deal with us, but we were insistent, and in the end, we got what we wanted: Hendel is out. This was intended to signal to us that if we decide to talk again after the election, we will be able to meet and sit down at the same table, once that problematic individual is out.”

A high-ranking source in the new party denied that Hendel was removed from its Knesset list in order to appease the ultra-Orthodox. At the same time, however, he also noted, “We are counting on the ultra-Orthodox parties to be a major part of the new government that we will form. The ultra-Orthodox have been in the opposition for long enough, only because they followed Netanyahu blindly. We will show them that it is possible to form a government with centrists too. The Likud offers to support their religious principles, but we can offer that same support.”