Rival for Israeli vote emerges in Lapid's own camp

Prime Minister Yair Lapid though opposition leader Benjamin Netanyahu would be his most dangerous rival, but now Defense Minister Benny Gantz also emerged as an opponent. 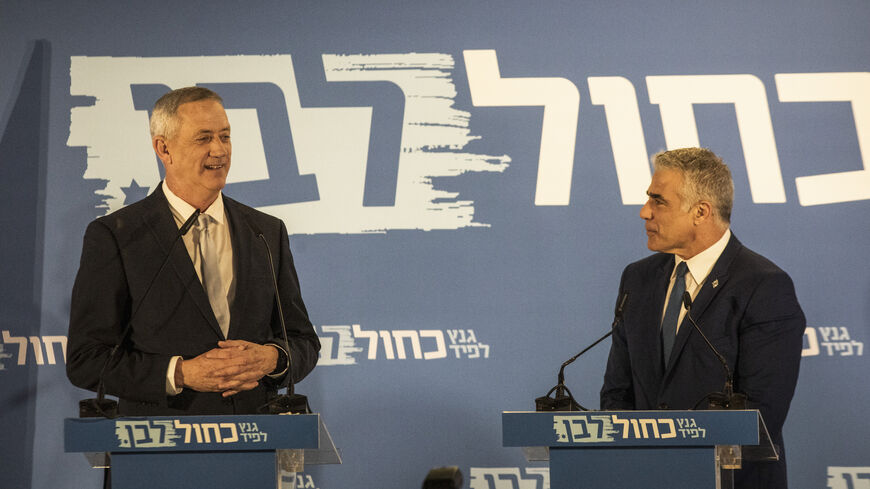 Benny Gantz and Yair Lapid seen on stage during the announcement of the new Blue and White Alliance on February 21, 2019 in Tel Aviv, Israel. - Ilia Yefimovich/Getty Images

The press had predicted that when he entered the prime minister’s office last month, Yair Lapid would lead the bloc of parties running against opposition leader Benjamin Netanyahu in the next election. According to public opinion polls published after he took office, Lapid is expected to win around 22 seats in the Nov. 1 election, making him leader of the second-largest party after Netanyahu’s Likud. Running as a sitting prime minister has its advantages as well.

However, in the last two weeks, Defense Minister Benny Gantz has positioned himself as an alternative to Lapid. How did that happen?

On July 10, Gantz and Justice Minister Gideon Saar announced that they were merging their parties, Blue and White and New Hope, and run together in the upcoming election. The move saved Saar, who was teetering on the electoral threshold and might have seen his party wiped out in the election, and provided Gantz with a much-needed boost. The new party is expected to become the third largest in the Knesset with an estimated 12 seats.

At the press conference to announce the merger, Gantz and Saar explained the move was intended to provide a third option for prime minister and prevent Netanyahu from resuming power. They contend that Lapid will never be able to form a new government because the ultra-Orthodox parties would never join a coalition led by him. Gantz, on the other hand, has close ties with the ultra-Orthodox.

Gantz followed the announcement with a media blitz, giving interviews to all the leading news outlets. Interviewed July 25 by Walla, Gantz was asked why he isn’t supporting Lapid, the leader of the largest party in the center-left bloc, as his candidate for prime minister. Gantz answered that he believes Lapid will have a hard time forming a coalition. “When push comes to shove, I am the only person in the Knesset that everyone lets speak and who speaks to everyone,” he said. His meaning was clear. Just as many parties boycott Netanyahu as a matter of principle, the ultra-Orthodox parties boycott Lapid.

In another interview, Gantz denied that the merger was meant to harm Lapid and emphasized that he was not trying to split the bloc. On the contrary, he claimed, uniting the two parties expands the bloc by placing it in the center of the political spectrum, where it can win the support of moderate voters from the right, though Lapid might disagree.

Meanwhile, Lapid is quickly learning that life in office is no picnic. His campaign does not seem focused beyond defeating Netanyahu. Left with just the hard left and Arab parties, he could lose any centrist-leaning voters to Gantz.

Lapid is already adjusting his campaign strategy. He has been heard saying that he will not form a coalition with extremist parties and has distanced himself from the Joint List despite any promises he made in the past. His zigzagging and lack of a consistent message are confusing during an election campaign.

At a party conference July 20, Lapid said, “It’s time for Israeli society to stop squabbling. There is just one way to deal with all the challenges facing us, and that is by confronting them together. We are a family, and in a family, even if you disagree with someone, you don’t let the whole household fall apart. Everyone is a partner in Israel’s democracy. These elections were forced on us, but they can still be an opportunity we may not have again to form a broad and stable national government without the extremists.”

Still, polls suggest that Lapid has no path to form a government.

Lapid may have benefited from great PR during President Joe Biden’s visit to Israel, but he is now left to handle all the real problems facing the country. He is a transitional prime minister, serving at a time when the cost of living is steadily rising. In contrast, Gantz is a popular minister of defense, removed from economic affairs.

Gantz and Saar both claim that Netanyahu will not win the 61 seats he needs, confident that the ultra-Orthodox will abandon him.

However, that this is wishful thinking founded only on campaign slogans. The ultra-Orthodox have made it perfectly clear that they have no intention of breaking their alliance with Netanyahu and all the signs indicate that Netanyahu has no reason to worry. The ultra-Orthodox sector tends to fall on the right and they have a deep admiration for Netanyahu.

Netanyahu made it through his year in the opposition unscathed. He is very popular in the polls and he heads the largest party. The most recent poll gives Netanyahu 60 seats. Still, he is missing a majority by one.

The country is still divided on Netanyahu. As of now, it seems almost impossible to convince voters to transfer their allegiance from one bloc to the other. Furthermore, when internal polls conducted by the center left parties ask potential voters if they would be willing to partner with Netanyahu if the election is undecided, the majority of respondents say that they would rather have a sixth election.