Heading toward a fourth round of elections in less than two years, Israelis can no longer tell right from left. 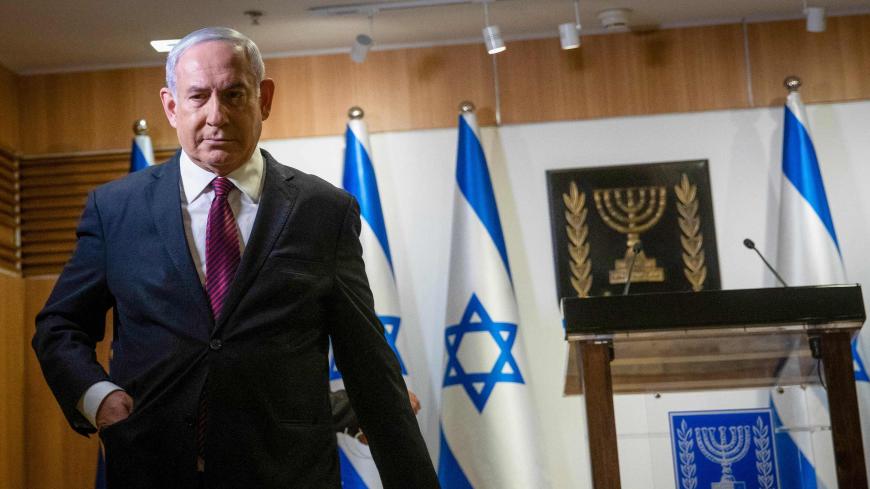 Israeli Prime Minister Benjamin Netanyahu leaves after a speech at the Knesset in Jerusalem on Dec. 22, 2020. - YONATHAN SINDEL/AFP via Getty Images

Sometime in the night between Tuesday and Wednesday, the Netanyahu-Gantz government finally collapsed. With it, Israel’s 23rd Knesset was dissolved and a new round of elections became official. It will be the fourth election in just two years. Like the three previous governments, the latest coalition was short-lived at just nine months and six days.

“Much to my chagrin, I am forced to tell you that we could not find enough common ground to avoid another round of elections,” said Knesset Speaker Yariv Levin in a late-night speech that marked the final session of the current Knesset.

It was like an old ritual. Once again, Prime Minister Benjamin Netanyahu stood before the TV cameras to announce that he was setting off for yet another battle. Even as he battles for his personal political survival and legal fate, he promised to lead the Likud to its greatest electoral achievement ever.

But in none of the last three elections was Netanyahu able to put together the right-ultra-Orthodox coalition he wanted. In each round, the opposition’s main objective was to unseat him. New parties formed, powerful forces coalesced and auspicious new political stars shone brightly over the political horizon. They all made the same promise: When this election is finally over, Netanyahu will vacate the prime minister’s residence.

This fourth election, slated for March 23, 2021, is part of a much larger political campaign that began in the fall of 2018, when Yisrael Beitenu leader Avigdor Liberman resigned as defense minister. His quitting the coalition instigated the effort to bring Netanyahu down. Liberman gave the signal and powerful new political forces organized in a matter of weeks and found themselves led by former Chief of Staff Benny Gantz. He may have been a political novice, but his chances of winning seemed excellent. The center-left bloc coalesced around him while Netanyahu remained entangled in his personal legal woes. It seemed his day had long passed.

There was new hope in the country. All those who considered Netanyahu a corrupt extremist who was actually destroying Israel were suddenly imbued with a fighting spirit. But facing this united force was an equally large bloc of voters who saw in Netanyahu a savior. They stuck with Netanyahu through thick and thin, allowing him to survive three elections in a row.

It is true that Netanyahu never won an absolute majority. It is also true that his list of enemies has grown. Nevertheless, he managed to keep control of the political playing field, preventing his opponents from forming a government. He remained in the prime minister’s office through a series of transition governments. Last May, after the third election, this time in the shadow of the coronavirus pandemic, Netanyahu was able to cobble together a unity government, with Blue and White’s Gantz slated to replace him as prime minister halfway through the new government’s term.

Gantz’ decision to cooperate with Netanyahu caused turmoil on the center left. After all, it ran Gantz for the purpose of replacing Netanyahu. The ensuing crisis was enormous. The Blue and White Party split. In the past three elections, it had managed to win 30-35 seats but was never able to translate the numbers into a political victory. Then Gantz did away with its banner issue: removing Netanyahu from power. It was the end of the dream.

The coronavirus government was unable to bring about real unity, with endless squabbling. Meanwhile, Gantz became persona non grata in the camp that he abandoned. Once he started plummeting in the polls, he worked to hone his positions when dealing with Netanyahu and show that he was an effective gatekeeper who ensured the integrity of the rule of law, while Netanyahu was focused on avoiding his trial. Inevitably, the partnership between the two men soured. It now looks like Netanyahu never planned to fulfill the rotation agreement in the first place.

From a historical perspective, these details will one day seem meaningless. All that will matter is the larger story of Netanyahu’s campaign to survive as prime minister, at a steep cost. Israel’s political system is falling apart, all because of Netanyahu’s personal struggle. As a result, with yet another upcoming election, it is not yet clear who will face Netanyahu: Likud rebel Gideon Saar, Yamina leader Naftali Bennett or Yesh Atid leader Yair Lapid.

In this new election, Saar will be central to the story. He quit the Likud two weeks ago, founded a new party and announced that he would run for prime minister. His new party immediately soared in the polls. Surveys now show that quite a lot of his potential voters come from the center-left, most of them from the Blue and White.

Until just two years ago, Israeli pollsters usually divided the electorate by party and bloc, left or right. The ultra-Orthodox parties were placed on the right, together with the Likud and its satellites and, of course, Liberman. The center-left bloc included the Arab parties and long-established political machines like Labor and Meretz, as well as newer parties. Ehud Olmert’s Kadima was such a party, and so is Lapid’s Yesh Atid.

After three rapid elections, the pollsters are at a loss. The traditional division into center-left and right blocs has been upended. At first, it was just Liberman who led his right-wing party out of the alliance with Netanyahu and the ultra-Orthodox and switched his loyalty to the other side. Now, it looks like Saar will follow his lead and possibly Bennett, too, all because of the personal enmity between them and Netanyahu.

The most recent polls have taken a new approach, dividing the electorate into “Netanyahu” and “anyone but Netanyahu.” The “anyone but” bloc includes Liberman, but also Saar’s new party, after he explicitly stated that under no circumstances would he help Netanyahu form his sixth government. However, the new breakdown is discordant at best and bizarre at worst. It is hard to imagine Saar and Liberman, both on the far right, cooperating with the Arab parties.

The big enigma is Yamina. While Bennett is running against Netanyahu for prime minister, he has not ruled out a coalition with him. Pundits divided over whether he will actually cross the lines and join the “anyone but Netanyahu” bloc.

The latest poll was conducted only yesterday, Dec. 22, once it became obvious that another election was inevitable. With an anticipated 29 seats, the Likud is not only the largest party but far ahead of any of its rivals. Netanyahu is only getting stronger. Saar is now head of the second-largest party, but his momentum has flagged. According to the polls, even this fourth round of elections will produce no decisive outcome.

The political system that was so stable until two years ago has been torn apart by all the failed attempts to bring down Netanyahu. Even if Netanyahu is defeated this time around, the political instability and chaos will remain with us for a long time to come.