Netanyahu beaten, not (yet) defeated

With most of the votes counted, it seems that Prime Minister Benjamin Netanyahu has no Knesset majority and almost no options for composing the next government. 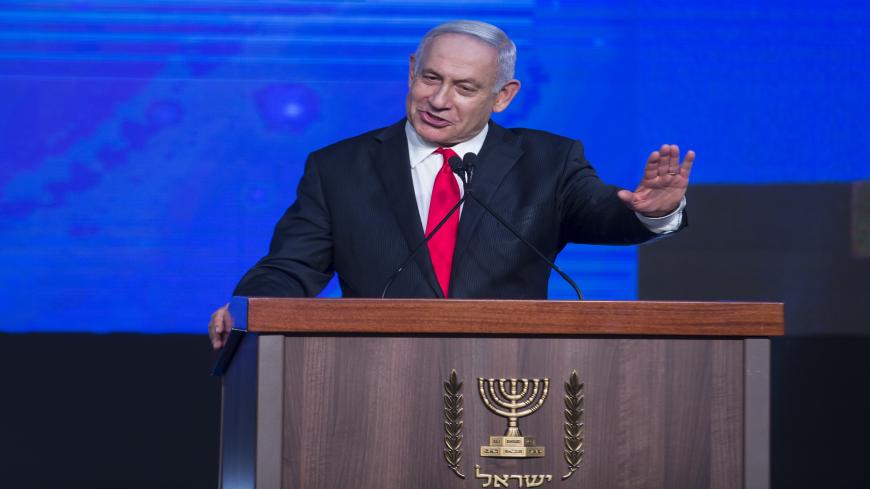 Israel has gone through a roller coaster of four consecutive elections within the past two years only to find itself back at the same spot. Whereas supporters of Prime Minister Benjamin Netanyahu tied with his opponents in the April 2019 voting, each garnering the equivalent of 60 Knesset seats, results of the March 23 elections (still incomplete) give the pro-Netanyahu bloc of parties 59 seats and the anti-Netanyahu bloc 61.

This does not augur well for either side. As of now, Netanyahu lacks the majority he needs to form a government, while his opponents will have to defy all logic and perform political acrobatics in order to square the circle and form a so-called government of change. On the one hand, Netanyahu has been blocked for a fourth time from achieving the coveted 61-seat Knesset majority, on the other hand he is still prime minister as he has been for 15 (nonconsecutive) years. This bizarre state of play is made possible by the rules of Israel’s political game, which is no consolation to anyone except Netanyahu himself.

Naftali Bennett, chair of the right-wing Yamina party, was predicted to be the hero of the day and provide the swing votes needed for one of the sides to win. That was the case on and off throughout the long night of vote counting, after all three television exit polls showed the Ra’am Islamist party led by Mansour Abbas failing to cross the 3.25% electoral threshold. When the sun set in the evening hours of March 23, Abbas was out of the game. When it rose the next morning, the vote tally positioned his party well above the threshold, possibly with five Knesset seats, reducing the pro-Netanyahu bloc from its 61-seat advantage to 59.

With only seven seats, far lower than his recent poll numbers, Bennett has lost his bargaining power vis-a-vis Netanyahu because even if he joins the pro-Netanyahu coalition, he would only boost it to 59 seats, not the majority it needs. With most votes counted, Abbas, whom pollsters and pundits had all but buried, has emerged as the linchpin, announcing his availability to the highest bidder.

The fact that Abbas has not ruled out supporting Netanyahu seems to open a window of opportunity for the prime minister. However, the feasibility of forming an exclusively right-wing government with the support of an Islamist party is virtually nil. Netanyahu’s nationalist and ultra-Orthodox partners will reject such a solution to the ongoing impasse, so will Bennett, and Netanyahu himself has also ruled out such a government and would even prefer a fifth round of elections. Abbas will also not rush to join a right-wing government; a move that could portend his political demise.

Looking at the bottom line, for the moment at least, Netanyahu has lost the battle, but not the war. He has once again failed to cross the 61-seat barrier. Any other leader would have gotten the hint by now, but Netanyahu is not just any leader. He views himself as a type of messiah. He will not accept the loss of power that would relegate him to the status of a mere bribery and corruption defendant in a criminal trial. The existential question he faces after four election rounds is whether he can maintain his relentless hold on the Likud party, suppress all pockets of resistance and ensure the continued loyalty of the two ultra-Orthodox parties. And then there is Bennett.

Netanyahu’s political genius boosted him from almost hopeless prospects, with the raging coronavirus and bitter challenges emerging against him on the right, making him realize he would have to reinvent himself ahead of his fourth bout. He engaged in an ardent affair with Arab voters, in general, and specifically with the Islamist party. He set about dismantling the Arab Joint List, an alliance of four Arab parties of which Ra’am was a member in previous elections, in order to weaken the bloc threatening him. This is a classic case of an operation that succeeded but the patient died. Indeed, the Joint List plunged from its historic peak of 15 Knesset seats in the March 2020 elections to just six now. Had Abbas failed to cross the electoral threshold, Netanyahu would have shouted “bingo” and added yet another political scalp to his belt. However, as things appear at the moment, Abbas has won, big-time, and Netanyahu’s affair with the Arab voters is unlikely to result in a wedding. It is looking more like a funeral.

Cracks have also appeared in Netanyahu’s magic touch with his Likud supporters. The voter turnout in traditional Likud strongholds declined significantly compared to the elections a year ago, bringing the party down from 36 seats to 30 (according to the incomplete tally). Netanyahu discovered that he could not hypnotize everyone all the time. Despite riding on the wings of the impressive coronavirus vaccine rollout and sending Israelis back to the malls, restaurants and beaches just in time for the elections, Netanyahu discovered he was no longer the same. He is still head of the biggest party, with an impressive lead over the second-biggest Yesh Atid party (30 to 17/18 seats), but he continues to eye the 61-seat obstacle from the wrong side. At some point, someone in the Likud will rise and ask himself and Netanyahu “how much longer” this stalemate can last.

There are several options ahead. As of now, the prospects of an exclusively right-wing government under Netanyahu are slim to none because he lacks the votes and the defectors from the other parties that challenged him on the political right. With Netanyahu displaying an electoral weakness of this kind, no one is likely to gamble on him and cross the lines.

Another option is a fifth election if the parties in the center and on the left adhere to their declared boycotts of other parties, ruling out the possibility of a government coalition.

Much also depends on President Reuven Rivlin who, by law, decides which candidate he tasks with forming a government following elections. Rivlin is expected to take his time making a decision.

Yet another possibility is a government led by someone who is not Netanyahu. Such a scenario depends largely on the political skills of four contenders — Yisrael Beitenu leader Avigdor Liberman, Yesh Atid Chair Yair Lapid, New Hope Chair Gideon Saar and Bennett. These four gentlemen would each give up a kidney if Netanyahu steps down willingly. Will they succeed in putting together a complex constellation that could uproot the ruling family from the official residence? Such an outcome is very far from certain but not necessarily a nonstarter.

Along with the bitter disappointment with Tuesday’s results for Saar (only six seats compared to over 20 when he launched his party three months ago) and Bennett, there were also a few clear winners. First and foremost, Blue and White Chair and current Defense Minister Benny Gantz, whom everyone had long ago relegated to the political scrap heap. As of now, his party has not only crossed the electoral threshold, it is likely to occupy eight seats in the 24th Knesset — a tremendous achievement raising hopes among those who still believe that good guys can come in first.

The resuscitated Labor party was another surprising victor (with seven seats), as was the left-wing Meretz that somehow managed to survive despite predictions to the contrary. The threat of annihilation that hung over these three parties in the final leg of the election campaign was likely the cause of the shrinkage in voter support forecast for Saar and Liberman. Israelis with centrist political views who had planned to vote for Saar or Liberman realized that if Meretz failed to get sufficient votes to make it into the Knesset, the prospects of unseating Netanyahu were doomed to failure.

At the end of the day, the center-left camp reached its goal of not wasting a single vote — except for the few who voted for the New Economic party of Yaron Zelekha that failed to cross the threshold —whereas Netanyahu gambled on the Arab voters and lost. Will this setback cost him his hold on power after 15 years? We will know in the next few weeks.