Israeli Prime Minister Benjamin Netanyahu knows that without Yamina leader Naftali Bennett he has absolutely no chances of forming the next government. 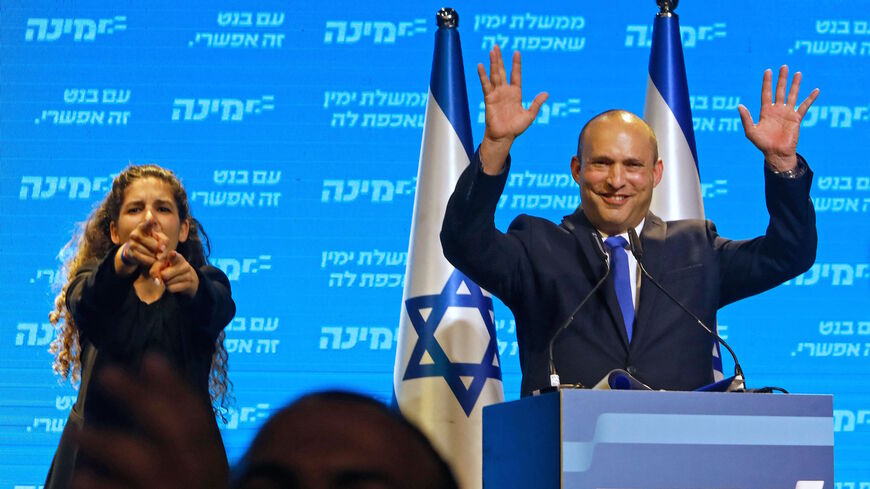 Naftali Bennett, leader of the Israeli right-wing Yamina party, addresses supporters at his party's campaign headquarters in Tel Aviv, after the end of voting in the fourth national election in two years, Israel, early on March 24, 2021. - Gil Cohen-Magen/AFP via Getty Images

Will the chair of the right-wing Yamina party, Naftali Bennett, cross the lines to the anti-Netanyahu bloc in return for the role of prime minister?

This is the cruel and painful dilemma facing Bennett as he weighs it against a great temptation. If he joins opponents of Prime Minister Benjamin Netanyahu, he could find himself within weeks replacing Israel’s invincible prime minister for the past 12 years.

This scenario stems from the seeming willingness by Yair Lapid, head of the centrist Yesh Atid party, to support Bennett for the premiership even though his party won 17 Knesset seats in the March 23 elections, while Bennett’s ended up with seven only. Lapid tweeted March 30 that he was willing to consider “painful compromises” in order to form a government of change. “There is nothing I am unwilling to consider, no stone we will not turn, and no option we will not weigh in order to form a government of change and remove Netanyahu …,” he wrote.

If such a scenario pans out, Bennett would become prime minister first and Lapid would take over half way through the government term. The government coalition would include the left-wing Meretz and Labor parties, the Yisrael Beitenu party of Avigdor Liberman and the right-wing Yamina and New Hope party of former Likud stalwart Gideon Saar. Such a constellation would also require cooperation with the Arab Joint List to ensure a Knesset majority (of at least 61 Knesset seats).

It could be easy, in some respects. Bennett would realize his dream and assume the coveted title of prime minister at the age of 49. However, the political and personal cost, as well as the risks, would be high. He would have to violate his promise to voters ruling out cooperation with Arab and Meretz Knesset members, and rejecting membership in any government led by Lapid. On the other hand, Bennett could always argue that he had also pledged to do all in his power to preclude a fifth round of elections after the four of the past two years.

However, the crux of the dilemma he faces is not about broken promises. First and foremost, it is about the legitimacy and morality of placing the country’s leadership in the hands of a politician with only seven Knesset seats (Netanyahu, for example, received 30).

It is not only the size of his electorate but also its nature. Bennett was elected by distinctly right-wing voters and he himself holds radical right-wing views, favoring annexation of Israeli settlements. A government most of whose members hold center-left views, supported by Arab lawmakers, would not allow Bennett to realize these ambitions. On the right, his decision to join the center-left would be considered radical, especially since he has been offered the option of joining Netanyahu to form an exclusively right-wing government with the ultra-Orthodox parties and a near Knesset majority of 59 seats. Given its two seas short of a majority, such a coalition would have to rely on the Islamist Ra’am party to abstain or absent itself from the Knesset vote on the new coalition government.

Netanyahu is not offering Bennett a rotation deal on the post of prime minister. Instead, given the dire circumstances, Netanyahu went on primetime television on March 31 to offer Bennett a seemingly generous proposal, which essentially integrates him and his party into the Likud. Specifically, Yamina representatives would be guaranteed realistic slots among the Likud’s future Knesset candidates and membership in the institutions of Israel’s biggest party, as well as a tempting package of senior government appointments.

Joining the Likud has been Bennett’s long-held political dream, ever since he served as Netanyahu’s chief of staff when he led the Knesset opposition in 2006. Bennett was a huge fan of Netanyahu's until a personal falling out with Netanyahu’s wife, Sara, brought the relationship to an ugly end. Netanyahu has haunted him ever since. In this sense, Bennett need not feel too sorry for Netanyahu, who has humiliated him for years and badmouthed his family in leaks to the media.

Netanyahu knows full well that the settlers and the ideological right are a soft spot for the kippah-wearing Bennett. Following the March 23 voting, Netanyahu assumed he would manage to tempt Bennett, but with each passing day, he realizes that this time, his task will be much harder if at all possible.

Netanyahu knows better than anyone that his political end could be closer than ever. His fate is in the hands of a man he despises, and in the best Shakespearean tradition, the dilemmas are intensifying and the drama is more riveting and intense with every passing act. For now, Bennett is secluding himself in the Judean Desert, where he is spending the Passover holiday with his family. Except for a single photo he posted on Twitter showing him smiling alongside one of his four children against the backdrop of the desert landscape, he is maintaining ambiguity.

Netanyahu blinked first, appearing publicly on the evening of March 31 for the first time since the elections. Facing the cameras to deliver his statement, Netanyahu appeared troubled and tense when he appealed to Bennett and Saar to return to the fold. “Let’s put our personal differences behind us and form a stable right-wing government,” he urged the two renegades.

Saar responded with contempt, while Bennett remained mum. Netanyahu’s plea was prompted by concern that President Reuven Rivlin will task Bennett next week with forming the next government if he reaches understandings on the matter with Lapid.

Although he did not look his best, Netanyahu’s nocturnal message had one clear goal: getting right-wing voters to apply pressure on Bennett and Saar. Saar is probably a lost cause, but Netanyahu still has leverage over Bennett. His people have been urging settlement leaders, rabbis and right-wing media personalities to keep up their pressure on Bennett and make it clear to him that his refusal to join Netanyahu would result in a left-wing government led by an allegedly “puppet” prime minister with only seven Knesset seats.

Shimon Riklin, the media figure probably closest to Netanyahu tweeted April 1, “Israel is in exceptional condition in terms of the coronavirus, the economy and diplomacy, and the settlements in Judea and Samaria have never been safer or more prosperous. But for a group of ingrates and supporters of Naftali Goldfarb, this is not enough. … They are therefore going with the left … madness.”

The Goldfarb to whom he referred was Alex Goldfarb, a member of the right-wing Tzomet party who crossed the lines to the Labor government of Yitzhak Rabin in 1995 in return for his appointment as a deputy minister, ensuring a Knesset majority for the Oslo Accord with the Palestinians. His name has since become synonymous with the betrayal of principles that resulted in what the right views as the Oslo “disaster” followed by a wave of terror attacks throughout Israel.

Likening Bennett to Goldfarb is meant to apply emotional and ideological pressure on Bennett, which is expected to increase in the coming days, including demonstrations outside his house ahead of Rivlin’s decision. Rivlin starts deliberations with the Knesset representatives on Monday, April 5, the same day Netanyahu’s corruption trial resumes. Netanyahu is convinced that if Bennett is given first crack at forming a government, he will succeed in his task, having already crossed the Rubicon and committed himself to an irreversible course of action.