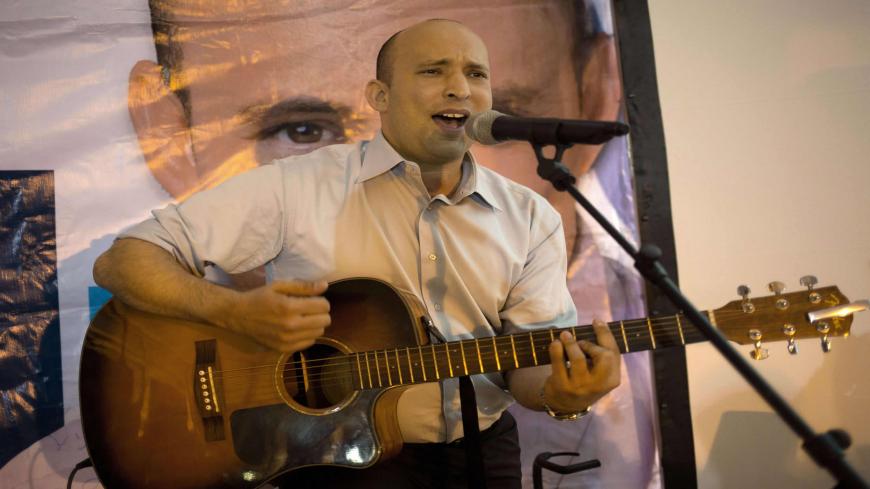 Naftali Bennett, Israeli economy minister and head of the right-wing Jewish Home party, plays the guitar and sings during an election campaign gathering for the Jewish community in Kibbutz Kfar Etzion in the Gush Etzion settlement block in the West Bank, March 12, 2015. - Menahem Kahana/AFP via Getty Images

“In the next few years,” Knesset member Naftali Bennett, head of the opposition Yamina party told Al-Monitor, “We have to set aside all political and diplomatic issues, not talk about anything else and not deal with anything other than the coronavirus, the economy and the people of Israel’s ability to make a living.”

This is ostensibly an obvious position for someone whose political star is rising on the back of the coronavirus pandemic. However, for those who like reading between the lines, Bennett’s comment has greater significance. “True, I fathered the calls to impose Israeli sovereignty over Judea and Samaria [West Bank] and I am one of the annexation prophets,” Bennett conceded. “But in the next two to three years there is no point in dealing with this or anything else. This is not a burning issue right now and I also don’t see any negotiations on the horizon. Saving the economy, the state’s finances and people’s incomes is the only thing of importance.”

No, Bennett is not undergoing a metamorphosis and is not veering to the political left. “I am not giving up one iota of my convictions,” he said. “But right now, the house is burning. The next two years will be some of the toughest in Israeli history and we do not stand a chance of getting through them unless we set aside our differences, for now.” Despite the euphoria sweeping global markets and world leaders this week in the wake of Pfizer’s successful coronavirus vaccine trials, Bennett was reserved. “It will take many months and perhaps more for an effective commercial vaccine to get here. There are many outstanding issues, but with 1 million unemployed, millions of children staring vacantly at computer screens, astronomical public debt that will take a whole generation to repay, these issues can be set aside temporarily to focus on salvage operations. And this is what we will do.”

While Bennett talks mainly about saving the Israeli economy, he is simultaneously busy trying to save the 22 Knesset seats he continues to garner in recent polls (some even give him more). Political pundits dub the tremendous support he enjoys and his meteoric rise “the biggest electoral parking lot ever in Israeli political history.” No one really believes that the man whose party won six Knesset seats in the March 2020 elections has quadrupled his support within a few months.

Bennett’s party has become a temporary repository for the votes of the disaffected, whether those disappointed with Prime Minister Benjamin Netanyahu and his Likud or the many who voted for his rival, Blue and White leader Benny Gantz, who has since plunged in the polls, correspondingly, from 17 Knesset seats to just nine. Some of those parking in Bennett’s capacious parking lot have not even turned off their engines. They are idling there, staring at their navigation application in an effort to recalibrate their course. Bennett is now trying to convince them to shift into park, pull the handbrakes and stay. He is trying to hold the stick at both ends — the end of the fervent, right-wing ideologue and of the go-getter pragmatist. His prospects of success are not high, but they exist.

In a display of upside-down logic, Joe Biden’s election to the US presidency serves the new image Bennett is trying to project. Had President Donald Trump been reelected, the ambitious annexation plan of Israeli settlements in the West Bank would have remained on the agenda, leaving Bennett in his previous role as prophet of the sovereignty and annexation vision. However, Trump lost and Biden will not even utter the word “annexation” out loud. He has relegated Bennett’s dream to an ignominious burial, leaving him no choice but to go with the flow and adopt a fresh agenda, much more palatable to wider swathes of the public than to his traditional constituency on the right. That is the direction he took.

The billion-dollar question is the direction Bennett will take with Netanyahu. Will Bennett step up to save his former boss and longtime mentor by joining him in a narrow, right-wing government, supporting the legislation Netanyahu needs to delay his corruption trial or vacate the indictments against him, in return for an appropriate quid pro quo? Bennett is not saying. “When elections are called, I will clarify exactly what I plan to do and answer all the questions,” he noted.

Bennett has said in recent months that he does not oppose a so-called French law (that would preclude indictment of incumbent prime ministers) but added that under no circumstances would he back its retroactive application to a trial that is already underway. That means that Netanyahu cannot count on Bennett to pull some of his irons out of the fire. Netanyahu, however, is also adept at counting on people who do not want to commit, and the final word in this regard has yet to be said.

Bennett will have to find a formula that allows him broad leeway — to preserve the votes of those who want Netanyahu to remain prime minister, while not driving away those who despise Netanyahu and want him gone. He will have to decide whether to cut himself off from the messianic right represented by his party colleague Knesset member Bezalel Smotrich and turn Yamina into a more centrist, religious-secular platform, attractive to both sectors.

Bennett knows, deep down, that the Likud leadership is his best guarantee of the premiership. The party that has ruled Israel for much of the past four decades continues to dominate the political map, with a wide and loyal base that translates in the polls to nearly 30 Knesset seats (out of 120).

Bennett’s most fervent desire is to replace Netanyahu as leader of the Likud, but he will never realize this dream if he unseats Netanyahu. Bennett knows full well that Likud voters do not forgive those who harm their leader. He will have to measure every move he makes in the coming months and walk on eggshells. Any sharp movement or misstep could bring down the tower of mandates he has labored to build. He despises Netanyahu and at the same time fears and idolizes him. Recent polls have brought him the closest any contender has come to Netanyahu’s rating in terms of the public view of his suitability as prime minister, and he is currently perceived as the most significant alternative to Israel’s eternal prime minister. He carries a heavy burden of proof. If someone had told him a year ago where he would be today, he would have laughed. At that time, he had nothing to lose. Now he does.