Is Israel ready for a religious prime minister?

Israel never had a religious prime minister, but popular Yamina leader Naftali Bennett is adamant in trying to get hold of the job. 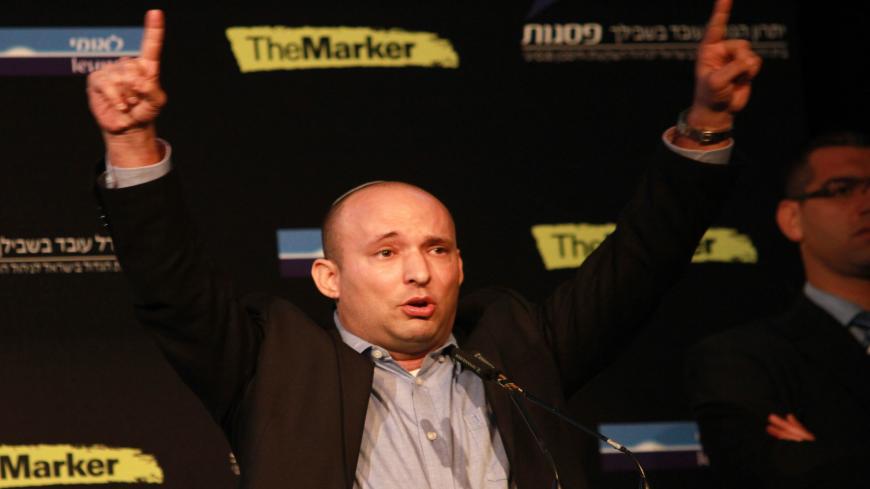 Naftali Bennett, Israeli economy minister and head of the far-right Jewish Home party, gestures as he gives a speech during a debate on the economy, Tel Aviv, Israel, March 11, 2015. - GIL COHEN MAGEN/AFP via Getty Images

Yamina leader Naftali Bennett’s story is the story of Israeli politics: a breathtaking rollercoaster ride with steep inclines and wild plunges, chronic manic depression, a humiliating political burial and a stupefying comeback against all the odds. Bennett, exiled from the Knesset in the April 2019 elections when his right-wing party failed to garner sufficient votes to cross the electoral threshold, is the official, refreshing flavor of summer 2020 in Israeli politics. Just over a year after being pronounced politically dead on arrival, Bennett is now declaring his intent to run for prime minister in the next elections.

Bennett’s incredible transformation can be attributed to his performance on the opposition benches and during a brief stint as defense minister, a post to which Prime Minister Benjamin Netanyahu appointed him in November 2019 to prevent him from crossing the lines to the rival Blue and White party. Bennett identified the opportunity and milked it for all it was worth. He was an energetic, proactive defense chief, mobilizing the military for the fight against the coronavirus, and perhaps the only Israeli politician for whom the coronavirus pandemic could not have come at a more opportune moment.

While the government dithered on handling the pandemic, Bennett displayed unusual independence and initiative. After a new government was formed in May 2020, and Bennett opted for the opposition benches rather than join it, he appointed himself shadow coronavirus minister, proposing initiatives, presenting plans and meeting with victims of the pandemic’s economic fallout, standing out against the backdrop of the government’s failure to stem the disease.

The blueprint for fighting the coronavirus resurgence, presented amid much fanfare at the end of July by professor Ronni Gamzu, the project manager appointed by the government, was a near replica of Bennett’s early April proposal, which was ignored at the time. Bennett identified the economic crisis before it erupted and focused on it. When all the politicians around him were busy forming a new government and handing out the electoral booty of the March 2 elections, Bennett insisted on one mantra: “ensuring livelihoods.”

And it worked. His rise was meteoric. Within weeks, the name of the somewhat marginal opposition politician was being mentioned in the same breath as leading Netanyahu rivals, such as Benny Gantz, Blue and White leader and defense minister; Yair Lapid, chair of the Yesh Atid party; and Avigdor Liberman, chair of the Yisrael Beitenu party. Right now, polls rate him higher than these two in terms of his suitability for the prime minister’s job. Polls also give his Yamina party between 14 and 19 Knesset seats, three times the five Knesset seats it now has, and for the first time in recent years, the idea of his candidacy for the premiership does not seem over the top.

Still, Bennett knows better than most the fickle nature of poll results. He found out the hard way in April 2019. In recent days, he has declared that he is not in Netanyahu’s pocket any longer. If/when elections are held, he could well recommend himself to President Reuven Rivlin for the position of prime minister. What's more, Bennett and his political ally, former Justice Minister Ayelet Shaked, have accused Netanyahu of dismantling the political right and declared that next time, all bets are off. Is Bennett capable of deserting his right-wing ideological camp and hooking up with people who are not Benjamin Netanyahu? Could he renew the famous “brotherhood” (alliance) he forged with centrist Lapid in 2013? In private conversations, he insists he can. Reality, statistics and history argue otherwise. Bennett’s political base would not forgive his betrayal of Netanyahu. On the other hand, Bennett knows the time has come to spread his wings and disconnect from the mother ship. Time will tell.

The broader question arising from Bennett’s revival is whether Israel is prepared and ripe for a religious, yarmulke-wearing prime minister. If Bennett’s poll numbers are translated into Knesset seats at the ballot box, he could wring a promise from the winner of a job rotation, similar to the job switch deal between Netanyahu and Gantz.

Israel has never had a religious prime minister. From David Ben-Gurion to Ehud Olmert, from Menachem Begin to Ariel Sharon, and especially secular Netanyahu, the leaders of the Jewish state were not religious adherents. They adopted the trappings of Jewish tradition in order to appeal to the religious and ultra-Orthodox, but did not keep the Sabbath or cover their heads. Demographic shifts of the past two decades have made Israel more religious and conservative, less liberal and progressive. On the other hand, while secular Israelis have lost the absolute demographic majority they enjoyed in the past, they still constitute the largest population group. Could they come to terms with a yarmulke-wearing premier?

Hard to say. Bennett’s current popularity crosses political sectors and party lines. Left-wing and secular voters are well aware of his creativity and innovative spirit as a former high-tech entrepreneur, and for the first time are willing to consider voting for him. Nonetheless, their numbers are not significant. Bennett’s base still hails from the right and religious-Zionist circles. He is not ultra-Orthodox, his yarmulke is small and he is considered “religious light,” perhaps the lightest possible. Will that suffice for him to overcome suspicion? The answer lies in the ballot boxes.

Bennett will have to decide whether to keep running on a platform closely affiliated with religious Zionism, with a secular “fig leaf” in the image of Shaked, or to veer to the center of the political map, mobilize additional secular politicians and create a shared religious-secular platform paving the way to consensus. All these decisions await the man who has already been eulogized, buried politically and almost forgotten. That is Israeli politics. It is never too late, no one ever truly disappears, anything is possible, and as late Prime Minister Ariel Sharon said at the time, “Most importantly, stay on the wheel, sometimes you are down, and sometimes up.”