Coronavirus-infected Israel, on brink of anarchy

As Israel records more than 3,000 new coronavirus cases a day, Prime Minister Benjamin Netanyahu’s opponents and also his ultra-Orthodox partners gang up against him. 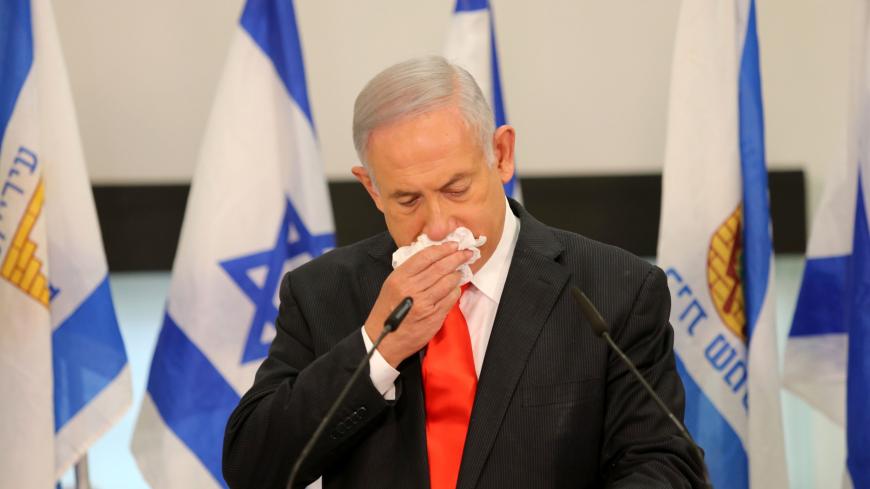 Israeli Prime Minister Benjamin Netanyahu visits the Israeli city of Beit Shemesh near Jerusalem on Sept. 8, 2020, after his government faced an uproar on its COVID-19 policy and then backtracked on it. - ALEX KOLOMIENSKY/POOL/AFP via Getty Images

Former Secretary of State Henry Kissinger coined the famous aphorism that "Israel has no foreign policy, only domestic politics." In the half century since this insightful pronouncement, the situation has only deteriorated. Today, Israel is a state in disarray. Prime Minister Benjamin Netanyahu has brought the lack of management and control to an art form of rare perfection. With the number of coronavirus infections breaking daily records, Israel is verging on anarchy.

The final nail in the coffin of Israeli governance was hammered in Sept. 7 when the chair of the Yisrael Beitenu party, Avigdor Liberman, called on Israelis to stop obeying government-issued instructions related to controlling the COVID-19 epidemic. “I call on the people to act in accordance with common sense and not in accordance with government guidelines,” Liberman said, accusing Netanyahu of having “sacrificed the public’s health for the health of his coalition, and therefore government decisions being made now are illegal.”

Following Liberman’s widely quoted remarks, Netanyahu sent an urgent letter to all the heads of the Knesset opposition factions (among them Liberman, Yesh Atid party leader Yair Lapid, Meretz party head Nitzan Horowitz and others), urging them to stop undermining the government. The lawmakers immediately fired back angry responses, calling on Netanyahu to step down and accept responsibility for the chaos.

Liberman’s exhortations reflect what appears to verge on a campaign of organized civil disobedience. The government of Israel and the project manager it appointed to deal with the spread of the coronavirus, Dr. Ronni Gamzu, are unable to come up with a publicly credible, organized response. Public trust in the government’s coronavirus-related decisions, motivations and performance has plunged to record lows. More than 65% of Israelis give Netanyahu’s handling of the country’s health and economic crisis a failing grade. Moreover, that is not all. The government has lost almost all ability to issue publicly acceptable instructions and to translate them into action. The prevailing sense is one of a free-for-all, of every man and woman for himself or herself.

In recent days, Israel has broken all previous records for the number of daily COVID-19 diagnoses, crossing the 3,000 mark, sending shock waves throughout the system, from Netanyahu down to the heads of the coronavirus hospital wards. Already on Sept. 3, in response to the hike in numbers, Gamzu presented to the government an emergency plan. Gamzu was planning for a lockdown on some 10 designated “red” towns and neighborhoods where the rate of infection is particularly high. The residents of these towns are either Israeli Arabs or ultra-Orthodox Jews, two population cohorts that account for a significant number of Israel’s COVID-19 cases due to their crowded neighborhoods, large families and prevailing norms of mass gatherings for prayers and celebrations.

The response to Gamzu’s lockdown decision broke out three days later. On Sept. 6, mayors of ultra-Orthodox towns informed the prime minister that they were considering a halt to all cooperation with the coronavirus “czar” and the government guidelines. Some of them dubbed Gamzu as “anti-Semite” and mounted vicious attacks against him on social media and elsewhere. Arab mayors were also clearly dissatisfied with the decision and spoke of a lack of police enforcement of coronavirus rules in their communities.

After the mayors came the ultra-Orthodox Knesset members and government ministers to whom Netanyahu owes his political survival. They demanded an urgent meeting with Netanyahu, at which they hurled harsh accusations against him, not just over the planned lockdown but also in the wake of the farcical handling of the annual pilgrimage of Breslov Hasidim to Ukraine. Tens of thousands of Hasidic Jews from Israel and other countries congregate each year in the Ukrainian town of Uman on the eve of the Jewish New Year to worship at the grave of their revered Rabbi Nachman of Breslov. Israeli and Ukrainian authorities sought to prevent this year’s pilgrimage over coronavirus infection concerns. The Breslov Hasidim, considered hard-core Netanyahu voters, announced they would no longer vote for the prime minister — and Netanyahu was quick to fold. He distanced himself from the decision to close Ukraine off to the pilgrims and did what he does best in such cases: He formed a ministerial committee to examine the issue and draw up a “format” for the annual trip to Breslov. His attempts to evade the Uman affair were not entirely successful.

And so, Sept. 6 was particularly chaotic. The ultra-Orthodox turned on Netanyahu in full force, the public expressed disgust with the government’s performance and Netanyahu gave in, once again. The decision on a total lockdown in ultra-Orthodox and Arab towns was rescinded and replaced by a decision to impose a nightly curfew on 40 towns hard hit by COVID-19. That decision, too, was delayed at the last minute Sept. 7. On Sept. 8, the ministerial coronavirus committee convened and after much arm-twisting, voted in favor of a weeklong nighttime curfew from 7 p.m. to 5 a.m. in dozens of towns and neighborhoods, starting immediately.

The vote notwithstanding, Israel is clearly on the brink of anarchy. In addition to Liberman’s call for civil disobedience, the head of the opposition Yamina party, Naftali Bennett, has also expressed particularly lethal criticism of Netanyahu in recent days. The prevailing sense is of a loss of government control given the inability to agree on solutions, implement them and mobilize the public’s support.

For now, none of this is having a significant destructive effect on Netanyahu. Although public satisfaction with his performance is at an almost record low, support for his Likud party remains firm and the party is still by far the biggest in the Knesset. Support for the party appears stagnant at about 30 Knesset seats (compared with the 36 it garnered in the March 2 election), while the politician benefiting most from the Likud decline is Bennett. His Yamina party, which garnered six Knesset seats in March, is polling at 21 seats, according to a Sept. 7 Channel 13 television poll.

Netanyahu is bleeding in the polls, but his disenchanted voters are moving to the right, not to the center or left. If elections were held now, Netanyahu would still manage to put together a coalition government with relative ease, without Liberman and the political center-left. Bennett is the only one who could try to blackmail Netanyahu politically after elections given his Yamina party's surging support. Here, however, the crisis of trust between Netanyahu and the public could come into play. How will he talk Bennett into a deal of the type he forged in April with Blue and White party chief Benny Gantz, including a job switch arrangement, when everyone knows he has no intention of making good on his arrangement with Gantz? Netanyahu tells himself that all will be well, that he will cross that bridge when the time comes. Still, right now, the bridge seems to be coming apart.