Despite war, thousands of Israeli Hasidim make pilgrimage to Ukraine

Much like the COVID-19 pandemic, the war in Ukraine won’t stop thousands of Hasidim from reaching the city of Uman and the tomb of Rabbi Nachman of Breslov just before the Jewish New Year. 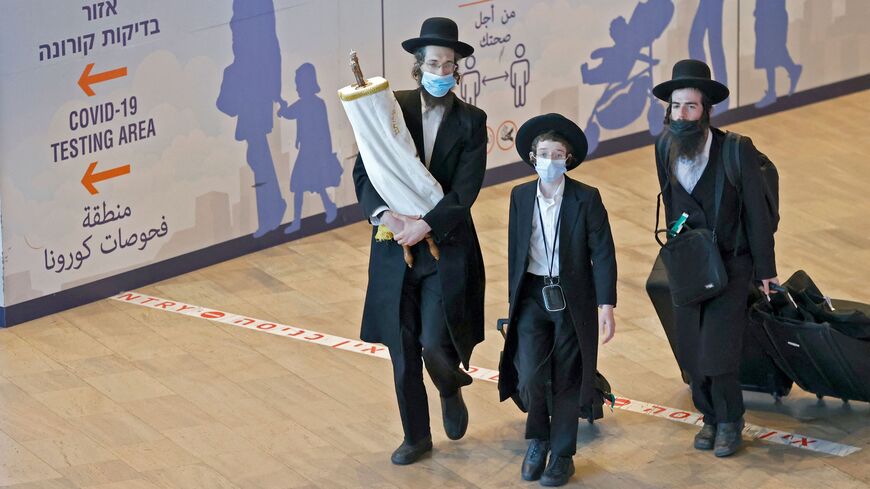 Some 30,000 ultra-Orthodox and traditional Israelis make a pilgrimage to the Ukrainian town of Uman annually, around the Jewish New Year holiday. Many of them are Breslov Hasidim, who are taught from a young age about the importance of gathering around the “marker,” the burial place of their sect’s founder, Rabbi Nachman of Breslov (1772-1810).

Reports this year say that thousands of Breslov Hasidim have already made their way to Ukraine, with thousands more expected to join them, despite the fighting still going on in Ukraine.

The last few years were especially difficult for the Breslov Hasidim. They contended with coronavirus restrictions, followed almost immediately by the Russian invasion of Ukraine.

Just two years ago, Yehezkel Cohen of Jerusalem found himself stuck in Belarus. He was planning to continue on to Uman, but the Ukrainian authorities blocked the entry of tourists into the region because of the pandemic. As a result, Cohen was forced to spend the holiday with his sons, ages 12 and 15, in a remote village in Belarus instead, with little in the way of food or shelter.

Cohen’s failed attempt back then did not prevent him from trying again. On the contrary, it made him even more determined. Instead of giving up on the pilgrimage just before the new year, Cohen decided to travel to Ukraine in early August.

“This year, I didn’t take any chances,” he said in a phone call to Al-Monitor. “I imagined that we would have problems this year too, so I arrived here two weeks ago. My wife and kids – my whole family – is here. We are prepared to be here right up until Rosh Hashanah [New Year]. Then we will immediately go back to Israel.”

Before the Holocaust, the Breslov Hasidim gathered in Uman every year. Even in the communist era, hundreds of Hasidim tried to reach the site in all sorts of ways. But with the fall of the Iron Curtain, the trickle of pilgrims turned into a flood.

Pilgrims to Uman benefited from a highly organized hospitality network, which provided them with food and accommodations. (Over the last few years, a wealthy American named Louis Scheiner funded vast kitchens, which prepare thousands of meals each day). On the other hand, it was no secret that the Ukrainian authorities were not entirely thrilled by the pilgrimage itself or by the festival atmosphere that resulted from it.

The 2020 coronavirus pandemic caught the Breslov Hasidim unprepared. At the time, Ukrainian President Volodymyr Zelenskyy announced that anyone who arrived in Ukraine before July would likely be granted entry. As a result, tens of thousands of Hasidim made their way to the border with Belarus. Then, Ukraine shut down its border two days earlier, leaving thousands of Breslov Hasidim stranded in Belarus.

The weather was terrible, and the Hasidim lacked food and shelter, but they expected Ukraine to open its borders to them. But fear of the virus was even more daunting than thousands of stranded Hasidim. Masses of pilgrims were denied entry. Then, after Rosh Hashanah, they returned home, severely disappointed.

The following year, the Breslov Hasidim were asked to fill in forms and meet certain criteria to avoid more COVID cases. The Hasidim offered a plan of their own, which was unacceptable to the Ukrainian government. In the end, the number of Hasidim granted access to Uman was reduced once again.

As a result of the ongoing fighting in Ukraine, Israel is trying this year to prevent Breslov Hasidim from making the pilgrimage to Uman. The National Security Council told the leaders of the sect that they would take no responsibility to anyone who goes this year, and that anyone who reaches Uman would be putting their lives at risk. They also made a point of saying that Israel has placed a formal travel warning on Ukraine.

But no one in Breslov was willing to listen. And some people in Ukraine are calling on the government to open the gates to the Breslov Hasidim,  to send the message that life in Ukraine goes on as normal. However,  many others, including members of the Ukrainian parliament, insist that the country cannot accept responsibility for thousands of Hasidim showing up in Uman.

“Many of the Hasidim are still suffering from the trauma of the past two years, when they tried to get to Uman but were blocked," says Aharon Klieger, a Hasidic writer. "This year they decided that come what may, they will get there. That is why there are hundreds of families in Uman already. They’re not willing to take a risk. They’ve been there in the two months leading up to Rosh Hashanah. They went there with their families, with their wives and children. And every day that passes, hundreds more Hasidim reach the town.”

How do they get there? Klieger says that the safest and most convenient border crossing is in Moldova. Hasidim from around the world arrive in that country every year and make the 9-hour car trip to Uman. “This route is relatively secure,” he says. “There are many cars for the people arriving there, including luxury vehicles."

Also, he said, the fighting "can hardly be felt near Uman. No missiles have fallen there to date.”

But even if the fighting is not taking place in Uman, its impact is certainly felt. The Cherkasy Oblast (in which Uman is located) has established a nighttime blackout, and there is a general curfew at 11 p.m., after which no one is allowed out of their homes. But reports from Uman say that where the thousands of pilgrims have gathered, it all but impossible to impose the curfew.

As a result, Breslov Hasidim still in Israel worry that Ukraine will deny them entry and are looking for alternative routes. Some are even requesting Ukrainian citizenship. “For Breslov Hasidim, the pilgrimage to Uman has always been worthwhile," Klieger explains, "even if it means risking your life for it, so they will do so again this year.”