The pilgrimage to Rabbi Nachman of Breslov’s tomb in Uman has this year become the subject of harsh objections from a part of the ultra-Orthodox community worried about mystical-messianic or populist brainwashing of Israelis, both religious and secular. 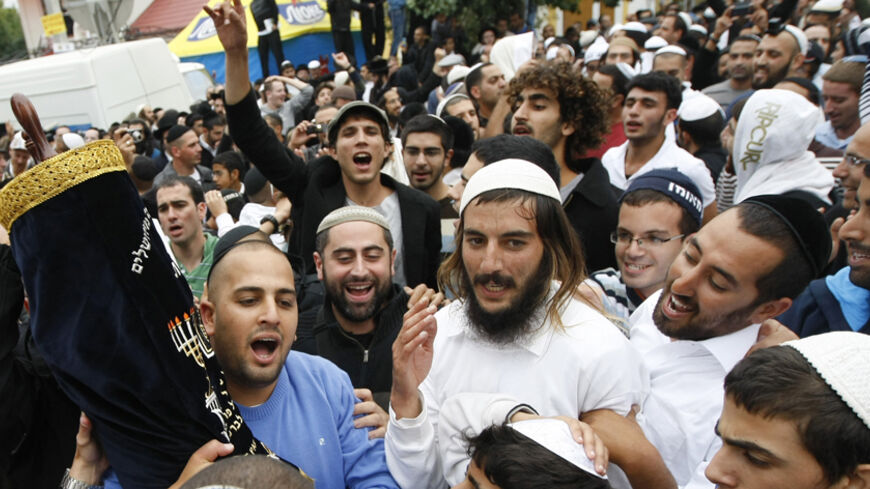 Ultra-Orthodox Jewish men pray near the tomb of Rabbi Nachman of Breslov in the town of Uman, some 200 kilometers (124 miles) south of Kiev, Sept. 8, 2010. - REUTERS/Konstantin Chernichkin

Until recently, only a handful of devout believers made the expensive trip to Uman, Ukraine, over the Jewish New Year (Rosh Hashanah) to the grave of Breslov Hasidic sect founder Rebbe Nachman. Somehow, this custom has now spread and gone mainstream, accepted and recognized at all levels of the Jewish population. Like fasting on Yom Kippur, the New Year pilgrimage to Uman has become a kind of “commandment” fulfilled even by secularists who observe few other religious customs.

Like other phenomenon of this type, the trip to Uman does not exclude celebrities. The comedian Eli Yatzpan and the singer Lior Narkis have been spotted in Uman in the past. This year, the singer Eyal Golan made the pilgrimage before the festival, to beat the crowds.

In September 2012, the secular Israeli journalist Royee Assis published impressions from his trip to Uman. At that time, 25,000 Israelis had visited the site on the holy day, and Assis joined them. “I live a secular lifestyle,” Assis wrote. “I was always skeptical and joked about this mass, blind flow of pilgrims to the gravesite. … [But] the spiritual experiences transcend that, and materialistic issues become trivial.”

Like trips to Indian ashrams, which are quite popular among young Israelis, the celebration in Uman is an easy-to-digest religious opportunity. It enthralls large numbers of Israelis, religious and secular alike, who have a spiritual vacuum they want to fill, but without changing their lifestyle. The Breslov followers make no religious demands on anyone. Everyone is invited to take part in the spiritual experience.

In recent days as the New Year approaches, the traditional trip to Nachman’s gravesite became the subject of stinging criticism from a little expected source. On Sept. 8, on the Kikar Hashabbat (Shabbat Square) ultra-Orthodox website, Rabbi Dov Halbertal published a scathing article under the headline, “Rosh Hashanah in Uman? You’re better off going to Paris.”

“Breslov wants to take control of Judaism,” wrote Halbertal, “and they are already at the stage of rewriting religious Jewish history. … The rejuvenating Breslov exploits the psychology of the masses. It has transformed Uman into a gold mine. Someone there is making a fortune from the brainwashing industry and from exploiting people’s naivete.”

Comments posted to the website were not long in coming. “May the ecstatic Uman experience be blessed,” wrote David Gvirstman in a reply to Halbertal, whom he accused of “shallowness, stupidity and impudence.” Halbertal, who says that he also received threats to his life, was invited by another writer to visit Uman himself.

In a stormy confrontation on the Kol Berama ultra-Orthodox radio station, Halbertal argued with Roni Paluch, an attorney. Paluch stated, “I was one of those who said I would never go there, but from the minute I stepped foot in Uman, my foot cleaved to the land there.”

The people who admonished Halbertal are not Breslov Hasidim, which is what scares him. “There is a growing trend of mysticism and messianism in Israel,” Halbertal told Al-Monitor. “It is with great worry and concern that I identify a turn toward irrationalism, not only among the religious and ultra-Orthodox, but also among secular Jews. This is not Judaism but an outburst of messianism and mysticism. It will blow up in our faces.”

Halbertal also said, “True, they don’t wield swords, but they want to build a great Breslov caliphate, just like the Islamic State. There’s a song with the words, ‘Soon we’ll all be Breslov.’ That’s brainwashing.” According to Halbertal, this trend has overtaken the entire Orthodox world. “It attracts followers from mainstream Judaism, from the world of rabbinical colleges, from the Hasidic world, the Lithuanian [non-Hasidic ultra-Orthodox] world too. Breslov is beginning to take control of ultra-Orthodox hearts and minds. You see it everywhere.”

Despite Halbertal’s admonishments, ultra-Orthodox leaders are not fighting the phenomenon. On the contrary, this year, in light of the tensions between Ukraine and Russia, Knesset member Rabbi Meir Porush (who is not a Breslov Hasid) turned to Foreign Minister Avigdor Liberman to help prepare diplomatically and logistically for the mass pilgrimage to Uman. Halbertal claims that most of the heads of the rabbinical colleges and the ultra-Orthodox leadership discourage the trip, but not in public. According to Halbertal, “We don’t have [the late] Rabbi Schach, an ideological leader [heard by all] who could rise up against it. The ultra-Orthodox don’t want an inner battlefield in the ultra-Orthodox world.”

Professor Zvi Mark, who holds the Rabbi Levi Yitzchak Berditchev Chair for Hasidic literature at Bar Ilan University, has authored four books on the Breslov Hasidic court. Mark told Al-Monitor, “In recent years, even members of the ultra-Orthodox world have been attracted to the Breslov Hasidic court, in Israel and abroad. Some travel to Uman for the New Year. It also happens in the Lithuanian world. There are Lithuanian leaders who have drawn closer to Breslov and travel to Uman with their disciples.”

Nevertheless, Mark claims that the dispute within the ultra-Orthodox community is more minor than Halbertal claims. “[The late Sephardic chief rabbi] Ovadia Yosef was against the trip to Uman,” Mark said, “but he did not prohibit it. He saw positive aspects in it, regarding bringing people closer to the world of Judaism and strengthening their identity. His view was more complex regarding the phenomenon. True, there is messianism there, but it’s complex. Beyond that, Breslov would take it as a compliment if the ultra-Orthodox world was afraid of them. There’s exaggeration here. The ultra-Orthodox are far more concerned about Finance Minister Yair Lapid and the army draft than the Breslov issue and trips to Uman.”

Also according to Mark, the real cause of Halbertal’s alarm may be from something entirely different that takes place in Uman. “In Uman, barriers between different Jewish denominations tend to break down. The religious Zionists, secular Jews, the Satmar Hasidic court, Breslov, judges, professors and average people — everyone is there together. What worries people like Halbertal is that ultra-Orthodox Jews will come in contact with secular Jews in Uman and reveal that they aren’t the demons they were taught to fear. That they will see that the secular Jew is an ethical, principled person who has not forgotten what being Jewish means. The atmosphere of freedom and the eruption of intense spirituality that has no place in the world of the rabbinical college — all that is perceived as a form of rebellion. And that is what arouses the concern of the ultra-Orthodox world.”