The alliance of the ultra-Orthodox with Prime Minister Benjamin Netanyahu seems to turn against them, as the public at large blames them for spreading the coronavirus. 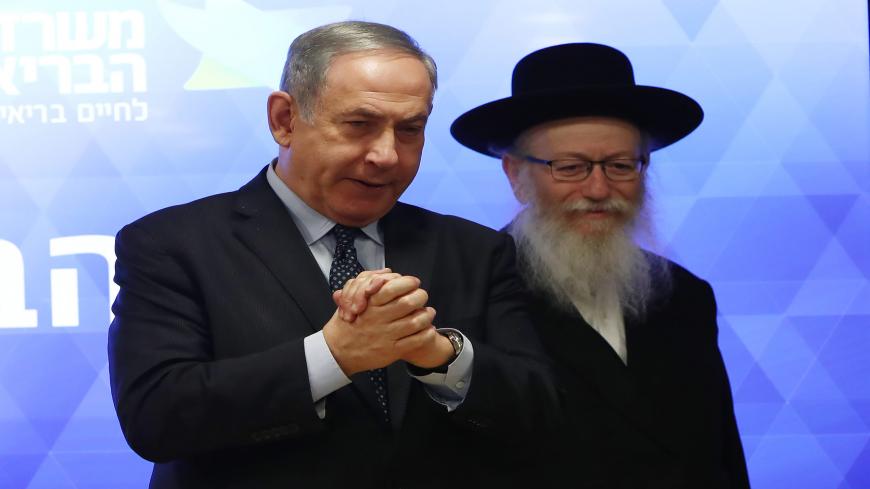 Israeli Prime Minister Benjamin Netanyahu (L) and Health Minister Yaakov Litzman give a joint press conference on preparations and new regulations for the coronavirus, at the Health Ministry in Jerusalem, March 4, 2020. - GALI TIBBON/AFP via Getty Images

Just last month, ultra-Orthodox Yahadut HaTorah Chairman Yaakov Litzman resigned from the government and gave up his post as housing minister. The move came in protest of the decision to place the country under closure during the fall holiday season. On Oct. 12, he returned to the government and his old Cabinet position, with the new title of deputy housing minister. It was part of a larger deal that the ultra-Orthodox parties made with Prime Minister Benjamin Netanyahu. Deputy Minister of Housing Itzik Cohen from ultra-Orthodox Shas was promoted to the position of minister in the Finance Ministry and minister of Housing, while Litzman returned to the Housing Ministry as deputy.

If anything, this reshuffling of Cabinet seats is evidence of a robust alliance between Netanyahu and the ultra-Orthodox parties. Like any alliance, it has seen its own set of challenges. When Netanyahu formed his third coalition, back in 2013, he had to contend with the “covenant of brothers” forged between Yesh Atid Chairman Yair Lapid and Yamina leader Naftali Bennett. The two men agreed that their parties would not join Netanyahu’s new government unless Netanyahu abandoned his ultra-Orthodox allies. He did, but the new coalition was relatively short-lived.

When he formed his fourth coalition in 2015, Netanyahu vowed that he would never again abandon his ultra-Orthodox partners — his "natural partners." Since then, both sides have benefited from this arrangement. Netanyahu now had his famous “bloc,” which kept him in the house on Balfour Street, even though he failed to win three consecutive elections in a single year. In return, the ultra-Orthodox parties received just about everything they wanted. Just recently, the Knesset’s Finance Committee Chairman Moshe Gafni reached an agreement to transfer 400 million shekels ($118 million) to ultra-Orthodox yeshivas in exchange for agreeing to postpone the submission of a new state budget. Without a decision to postpone, and if the state budget isn’t approved, the Knesset is dispersed automatically.

And yet, even if the alliance between Netanyahu and the ultra-Orthodox had benefited them both, the ultra-Orthodox are currently not doing well. With the coronavirus pandemic raging, they are considered by many Israelis as the most despised sector in the country. In fact, they are being blamed for spreading the virus.

The background for this is the difficulties encountered by authorities to enforce COVID-19 restrictions in ultra-Orthodox areas. Public anger has been exasperated by Netanyahu’s refusal to implement local closures instead of a nationwide shutdown, as proposed by coronavirus czar professor Ronni Gamzu. The nationwide closure ends Oct. 18, and Gamzu would like for lockdown to be prolonged in the towns most infected — in other words, lockdown of several ultra-Orthodox towns.

The fear is that failure to rein in the virus could lead to the collapse of the country’s entire health-care system. This is based on a remarkable statistic: Over one-third of all new coronavirus cases in the country originate in the ultra-Orthodox community, even though it makes up only 10% of the total population. These numbers contrast sharply with the latest coronavirus trends among the Israeli-Arab public. There, just like the ultra-Orthodox society, numbers of infections were high throughout August and September. But local leadership managed to curb the rise and get numbers significantly down.

In a conversation with Al-Monitor, ultra-Orthodox journalist Benny Rabinowitz said, “The story is that Netanyahu found a sophisticated way to scapegoat the ultra-Orthodox community as far back as the first round of the coronavirus pandemic. Even then, he tried to deflect attacks against him and redirect them toward the ultra-Orthodox parties. The ultra-Orthodox community has always been vulnerable to attacks, but what Netanyahu did in a very sophisticated and methodical way is to turn the ultra-Orthodox community into a target in the coronavirus crisis. Netanyahu had half a year to create an organized epidemiology network and prepare the country and its hospitals for the anticipated second wave. Instead he did nothing. After all, the state of anarchy and chaos in the country is only to his benefit. Everybody knows that when Netanyahu really wants something, he knows how to bang on the table to get it. He didn’t do that this time, yet ironically, with that inactivity, he was able to kill two birds with one stone. On the one hand, he avoided getting into any arguments with his ultra-Orthodox partners by giving them everything they wanted. On the other hand, he successfully labeled them as a problematic community.”

Anyone who has followed developments in Israel during the coronavirus crisis will have noticed that antagonism toward the ultra-Orthodox community has been growing steadily from one day to the next. At this point, it is already reminiscent of the antagonism toward the local Arab population, and it is safe to assume that it will only intensify as infection rates in the ultra-Orthodox community increase. The question that must be asked is whether this is entirely the consequence of the failure by Netanyahu and other elected officials to handle the coronavirus crisis, or whether there is some underlying political component behind it as well.

Strategic consultant Eyal Arad told Al-Monitor, “The ultra-Orthodox community has always evoked animosity and even loathing among certain secular circles, because of their isolationist tendencies. Majority groups don’t usually like groups that maintain a distinct and separate identity. In that sense, I would say that there is a certain similarity to attitudes toward the local Arab society. As long as the ultra-Orthodox held the balance of power, the center-left was willing to accept them, based on the assumption that they will one day be able to work with them. As soon as they aligned themselves so firmly with Netanyahu, the half of the population opposed to Netanyahu grew to be opposed to them too.”

Obviously, ultra-Orthodox society is not entirely to blame for its high infection rates. While there have been a few Hassidic groups that acted irresponsibly by holding mass events, there were others who have tried to follow the guidelines. One of these is Moshe Fried, an ultra-Orthodox immigrant from the United States. He told Al-Monitor, “I made a point of praying at home once the coronavirus crisis began. The one exception was the High Holy Days, but even then, we made sure to follow all the guidelines. I think Netanyahu acted irresponsibly — like a populist. If he would have continued the first closure for a few more weeks, instead of folding to demands that he reopen the country immediately, this whole story might have been behind us now. There were times when he was a lot tougher with the ultra-Orthodox parties, but he is not as tough now. Because he adopted a populist approach instead of acting like a real leader, he caused this unnecessary antagonism toward the ultra-Orthodox. It was inevitable. The public is always looking for someone to blame.”