Public outrage against the ultra-Orthodox community is palpable in Israel for its members disobeying coronavirus restrictions against large gatherings. 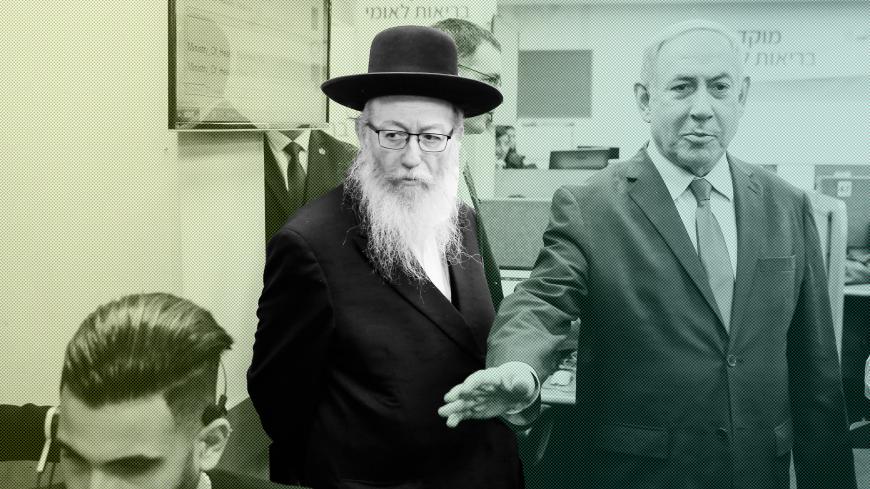 The funeral of Rabbi Tzvi Shenkar, head of the Beit David yeshiva, took place in Bnei Brak on the night of March 29. Hundreds of members of the ultra-Orthodox community accompanied the late rabbi on his final journey despite directives by the Ministry of Health that no more than 10 people attend funerals in light of efforts to combat the novel coronavirus. Even Bnei Brak Mayor Avraham Rubinstein attended the ceremony.

A video documenting the gathering soon went viral on social media, sparking furious responses from people holed up in their homes for the past two weeks or longer. The funeral added to a litany of revelations concerning actions by the ultra-Orthodox, many of whom continue to attend public religious rituals and study sessions despite explicit instructions to the contrary. It was only a matter of time before the severity of the situation would be exposed.

According to figures provided by the Ministry of Health, the rate of coronavirus infection is higher among ultra-Orthodox communities than the national average. In Bnei Brak, the country’s largest ultra-Orthodox enclave, one out of every three people tested was found to have the virus. The densely populated city is home to about 200,000 people, most of them large families of ten or more people living in tiny apartments. Such conditions make it almost impossible to prevent the spread of the virus. In fact, the situation is a ticking time bomb with the potential to collapse Israel's entire health care system.

The blame for all this has fallen primarily on Health Minister Yaakov Litzman (Yahadut HaTorah), who has been accused of being exceptionally lenient toward the ultra-Orthodox community from the beginning of the crisis. Prime Minister Benjamin Netanyahu has also come under criticism for ignoring Litzman’s behavior for political reasons, that is, so as not to harm his alliance with the ultra-Orthodox parties. There were even calls for Netanyahu to fire Litzman and replace him with a professional.

Litzman has rejected the criticism of course, asserting that he has no plans to depart the ministry even after a new government is formed. He has, however, come to realize that he is playing with fire, which is why on March 30 he announced his support for imposing a closure on Bnei Brak to prevent the spread of the virus elsewhere. In doing so, he closed ranks with the professional staff at his ministry, who had asked him to take drastic measures in Bnei Brak before the situation spirals out of control.

A total closure is yet to be imposed on the city, but it has been cordoned off by police roadblocks and soldiers to prevent non-residents from entering. Furthermore, laws prohibiting prayers in synagogues and immersions in ritual baths have been strictly enforced. The same holds in the ultra-Orthodox neighborhoods of Jerusalem, where such laws have been enforced more severely. For instance in Meah Shearim, synagogue doors were welded shut after it was learned that hundreds of people had been violating the emergency regulations.

The degree to which the coronavirus has spread among the ultra-Orthodox remains unclear as does the extent to which the community's lawlessness and insistence on ignoring clear instructions from the government will affect the health care system's ability to cope with the current crisis. What is clear, however, is that this episode represents a fresh line in the sand in the already contentious relationship between the ultra-Orthodox and secular populations. It is certainly raising tensions between them.

Until now, the relationship could best be characterized by the tension surrounding the exemption from military service granted to yeshiva students. This had led to protest movements and the formation of political parties seeking to force the ultra-Orthodox to carry their share of the burden. It is an issue that brought down governments and caused political crises. In May 2019, Yisrael Beitenu Chairman Avigdor Liberman blocked Netanyahu from forming a government because he did not believe the enlistment law for the ultra-Orthodox that Netanyahu was proposing would lead to their equally sharing the burden. Liberman’s obstinance resulted in new elections being called for September.

The reason for the second election was in due time forgotten, and the relationship between the ultra-Orthodox and secular societies reverted to its previous form, which is, in essence, a lack of equality between the two communities when it comes to sharing the burden of military service. Then the coronavirus arrived, exposing the exasperating, separatist tendencies of the ultra-Orthodox community. Even people who had previously maintained a degree of political correctness could no longer hold back. So, for example Mayor Carmel Shama of Ramat Gan, a town bordering Bnei Brak, demanded that the prime minister impose a closure on places with a significant coronavirus outbreak, such as Bnei Brak. “The residents of Ramat Gan make a point of following all the instructions, so the rate of infection in the city was relatively low, until a few days ago.… Unfortunately, there have been large gatherings in certain locations in the neighboring town of Bnei Brak that have led to a drastic rise of infection in Ramat Gan.”

According to reports, the situation in Bnei Brak is, in fact, serious. Terrified residents are confined to their homes, while a large police presence patrols the empty streets. Ultra-Orthodox journalists report a humanitarian crisis in the making, with many residents feeling like a flock without a shepherd, just days before the Passover holiday, which begins April 8.

The public outrage directed at the ultra-Orthodox community can be felt across social networks. “Very soon Bnei Brak will turn Israel into Italy!’’ tweeted the journalist Doron Herman. “All the responsible bodies are dragging their feet, unable to get the sick people out of the city.” Other tweets were even more outspoken. It is becoming increasingly clear that the coronavirus could be a tipping point in ultra-Orthodox society's relationship with the secular community. Israeli society's willingness to tolerate the lack of equality when it comes to sharing the burden of military service could well shift as a result of the coronavirus crisis. One expression of this would be a growth in support for political parties with an anti-ultra-Orthodox agenda, such as Yesh Atid and Yisrael Beitenu.

This is also a big test for the ultra-Orthodox. After all, they will one day have to account for what happens. One potential outcome is that the crisis gives rise to a different kind of leadership among the ultra-Orthodox, producing one that understands the importance of such situations and promotes greater involvement of the ultra-Orthodox in Israeli society at large, including in the workforce and the military.