Ultra-Orthodox politicians feel that Prime Minister Benjamin Netanyahu is using them as scapegoats over coronavirus failures. 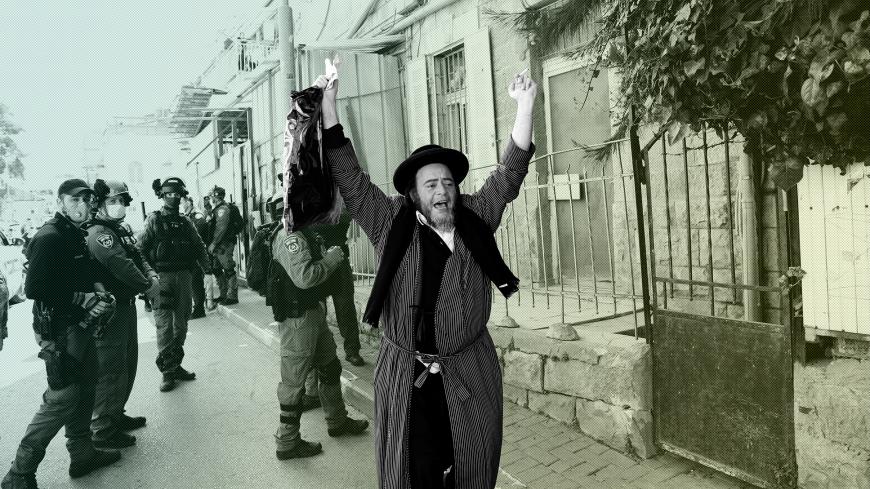 An ultra-Orthodox Jewish man reacts after police fine him for defying government restrictions set in place to curb the spread of the coronavirus, in the Mea Shearim neighborhood of Jerusalem, April 6, 2020. - REUTERS/Ronen Zvulun

At the beginning of the week, when news reports and social media were devoted 24/7 to the rising number of coronavirus cases in Israel’s ultra-Orthodox communities, especially in the country’s largest ultra-Orthodox town of Bnei Brak, the ultra-Orthodox leadership began signaling its anger at Prime Minister Benjamin Netanyahu. The leaders were annoyed and suspicious of his silence over what they interpreted as collective incitement against their communities for allegedly spreading the disease. With Bnei Brak placed under virtual lockdown, control of the town handed over to the army and journalists reporting from its streets as though from a war zone, ultra-Orthodox leaders felt their people were being blamed for Netanyahu’s flawed handling of the crisis. Rather than focusing on the shortage of test kits, protective equipment and respirators, the public had turned the ultra-Orthodox into a punching bag and a target of unrestrained venom.

Ultra-Orthodox journalists active on social media pointed the finger of blame at Netanyahu, arguing that he was cleverly allowing secular Israelis to lash out at them in order to divert attention from his own shortcomings. “The government is preparing to drop the blame for the chaotic management of the [coronavirus] crisis onto the heads of the ultra-Orthodox public. Netanyahu has rushed to impose a full closure only on the ultra-Orthodox towns, without equitable treatment of all citizens, and to turn the ultra-Orthodox into scapegoats in the media. Netanyahu, don’t even try, it won’t wash,” Yossi Elituv, the editor of the ultra-Orthodox newspaper Hamishpaha, tweeted on April 5. Elituv is also a political commentator and is considered a senior figure within ultra-Orthodox and secular media.

When similar comments by other ultra-Orthodox journalists gained traction, they engaged the attention of ultra-Orthodox politicians who had already found themselves on the defensive since the outbreak of the epidemic, given its rapid spread among their constituents. Given the negative climate against their communities, ultra-Orthodox politicians were also forced to come to the defense of Health Minister Yaakov Litzman, their senior political leader, who is being blamed for his failed handling of the crisis and for going easy on his voters by allowing them to continue congregating in synagogues, exacerbating the contagion. The attacks on Litzman, who subsequently contracted the disease himself and was placed in isolation, included calls for his dismissal, which were also perceived by the ultra-Orthodox as encouraging open season on their communities.

The 16 Knesset members of the two ultra-Orthodox parties realized all eyes were on them while Netanyahu was ignoring their plight and politically benefitting from the fire being directed at them. In response, they launched a battle of their own for the public’s hearts and minds. Veteran Knesset member Moshe Gafni of Yahadut HaTorah issued a public threat to Netanyahu on April 5. “We will not be partners with someone who imposes a closure on the ultra-Orthodox sector. This is a red line as far as we are concerned. I expect Prime Minister Netanyahu to take action on this matter and not just to talk.” Gafni emphasized that he was speaking on behalf of his colleagues, as well as Litzman and ultra-Orthodox Shas Party Chair Aryeh Deri.

Netanyahu rushed to stem the fallout. The last thing he needs right now at the height of the coronavirus crisis and negotiations on a unity government is the disintegration of the bloc of ultra-Orthodox and right-wing parties that he had labored so hard to build. “I condemn the wild incitement against the ultra-Orthodox,” Netanyahu said in a widely circulated press statement also posted on social media, adding that the community had already “internalized the threat and the Health Ministry’s instructions. The coronavirus epidemic doesn’t differentiate between ultra-Orthodox and secular, between Arabs and Jews. We don’t either. We are all in this together, and together we will defeat it.” Netanyahu’s statement did the trick, as did his decision to impose a full closure from April 7-10 on the entire state for the Passover holiday and not only on the hard-hit ultra-Orthodox towns and neighborhoods.

Nonetheless, the coronavirus crisis will continue to challenge Netanyahu’s longstanding and seemingly unshakeable alliance with the ultra-Orthodox for several reasons. One example is the rapid changes Israel’s ultra-Orthodox society is undergoing these days, over which the political leadership does not appear to have control. The presence of hundreds of soldiers in ultra-Orthodox towns to deliver aid and beef up police roadblocks and their direct contact with young ultra-Orthodox men expose the largely isolated young men to hitherto rather unknown worlds. Internet providers are reporting a 45% jump in the use by the ultra-Orthodox since the start of the crisis. This is a real revolution that is expected to affect the way of life in this walled-off society, especially among young people now exposed to information emanating from sources other than traditional rabbinical authorities. In other words, the health crisis is exposing ultra-Orthodox society to potentially deep changes that greatly trouble their political leaders who owe their power to the rabbis. Young people could even challenge the rabbis’ instructions to vote for one of the two ultra-Orthodox parties in future elections.

Netanyahu has enjoyed (politically) over the past few years an unshakeable alliance with the ultra-Orthodox parties. As prime minister, he safeguarded their special interests, designated budgets and the status quo that allowed most young men to avoid the draft. The ultra-Orthodox, for their part, provided him with a tight safety net in his toughest political times, including his indictment for bribery and failure to put together a government after three successive elections. Therefore, when they sensed in recent days that Netanyahu was ignoring their pain, they were quick to present him with an ultimatum. Gafni’s comments are by no means the end of the alliance; they are more of a wakeup call for Netanyahu and a warning not to take their loyalty for granted because they do have other options.

Gafni is mostly hinting that the ultra-Orthodox could choose to cooperate with Blue and White party Chair Benny Gantz, who recently split up with the Yesh Atid party and its leader, Yair Lapid, with a view to joining a Netanyahu-led government — which has yet to materialize. For the ultra-Orthodox, Lapid is an intolerable provocation. They regard him as a persecutor, especially since he hooked up with the chair of the Yisrael Beitenu party, Avigdor Liberman, who ran a targeted campaign against the ultra-Orthodox in recent election cycles. They have no issues with Gantz, who himself hails from a religious background, whom they like and with whom they feel at ease.

Netanyahu should also be bothered by the alliance forged in recent weeks between Shas leader Deri and Gantz’s second-in-command, former army chief Gabi Ashkenazi. The two have formed an axis that contributed greatly to speeding up negotiations on a “[coronavirus] government” between Blue and White and Netanyahu’s bloc. Their partnership could serve as a platform for a new alliance between the ultra-Orthodox and Gantz and Ashkenazi. The latest realignment of Israel’s political system is presenting everyone with new opportunities.