The reasons for the eruption of Israel’s latest political crisis, and the way it was handled, reflect division within the ultra-Orthodox parties and a leadership crisis. 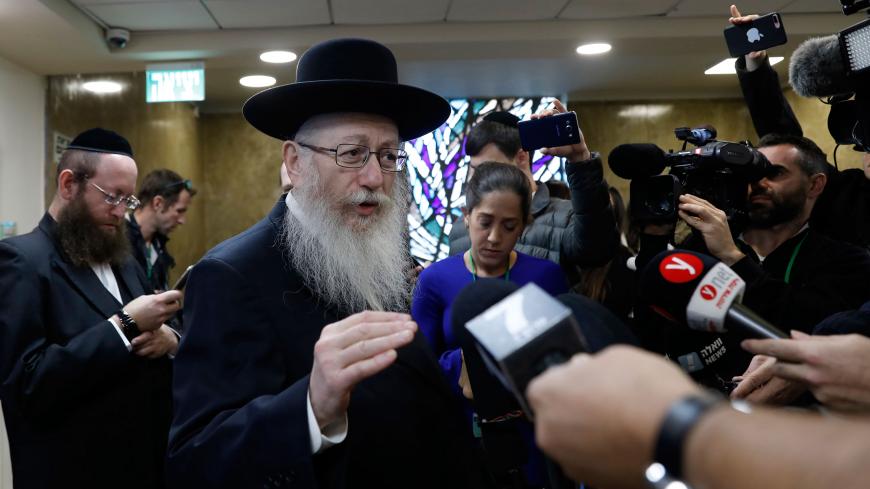 Israeli Health Minister Yaakov Litzman, chairman of the ultra-Orthodox United Torah Judaism, speaks to journalists after handing in his resignation to Prime Minister Benjamin Netanyahu over a dispute regarding railroad maintenance on the Sabbath, Nov. 26, 2017. He later rejoined the government. - GALI TIBBON/AFP/Getty Images

The crisis over mandatory military service by ultra-Orthodox men that almost tore apart the ruling coalition this month caught Prime Minister Benjamin Netanyahu unprepared. He was not the only one. Ultra-Orthodox Knesset members, chief among them Deputy Health Minister Yaakov Litzman of Yahadut HaTorah, or United Torah Judaism (UTJ), were also surprised.

Acting on instructions from Rabbi Yaakov Aryeh Alter, the head of the Ger Hasidic court, Litzman was forced to hand Netanyahu an ultimatum over a proposed bill lifting criminal sanctions against yeshiva students refusing to enlist for compulsory military service. Litzman threatened that if the new draft bill failed to pass, his party would block the 2019 budget.

Until a year ago, Litzman had been the sole spokesman on political matters for the largest and most influential Hasidic sect in Israel and a close confidant of its leader, the Ger rabbi. His opponents in the sect, however, found the politician's soft spot and hit it with the conscription bill ultimatum.

Two main political factions represent Israel’s ultra-Orthodox citizenry. One is the double-headed UTJ faction, a union of Agudat Yisrael, representing Hasidic Jews, and the Degel HaTorah, representing the so-called Lithuanian wing of non-Hasidic Jews, and the other is Shas, which represents ultra-Orthodox Sephardi Jews, who mostly hail from Arab states. Shas generally toes the UTJ line on issues of state and religion, but it is considered more moderate and usually negotiates compromises between UTJ and the five other parties in the governing coalition.

The ultra-Orthodox politicians receive their marching orders from the Councils of Torah Sages — each party or stream has its own rabbi council — which make fundamental decisions on matters of principle. The 2013 death of Rabbi Ovadia Yosef, the Shas founder and longtime leader, greatly diminished the power of that party's rabbi council. The supreme council of Degel HaTorah was similarly affected by the death in 2012 of Rabbi Shalom Elyashiv, after which the so-called Jerusalem sect refused to submit to the authority of Elyashiv’s successor, Rabbi Aharon Steinman, and broke from the party. Steinman died three months ago, and there is currently no heir of significantly high religious authority. Agudat Yisrael's Council of Sages consists of the chief rabbis of the various Hasidic courts comprising the party, and what matters there is size. Thus, Litzman’s Ger court, the biggest one, dominates the party.

Litzman is a seasoned politician. He has been around the Knesset since the 1980s, serving as an aide to ultra-Orthodox politicians Avraham Shapira and Moshe Feldman. In 1999, he was elected to the Knesset, and in 2001 he had already become head of the powerful Finance Committee. Together with his colleague Moshe Gafni from Degel HaTorah, he managed the affairs of the ultra-Orthodox regarding the government and the Knesset.

In 2009, Litzman was appointed to head the Ministry of Health, but for religious reasons, he held the position officially as deputy minister of health. For years, the ultra-Orthodox had preferred such an arrangement to avoid having responsibility for the secular state. In August 2015, following a Supreme Court petition by the anti-clerical Yesh Atid seeking to abolish these pretend deputy posts, which had only been created to appease the ultra-Orthodox, Litzman made history by becoming health minister, the first ultra-Orthodox politician to serve as a full-fledged government minister. Earlier this year, the Knesset passed legislation allowing Litzman to again lead the ministry as deputy minister but with ministerial authority.

Litzman is a close Netanyahu ally. In the fall of 2015, he informed the prime minister of a coup plot by Yesh Atid Chair Yair Lapid, who served at the time as finance minister in the government, which did not include the ultra-Orthodox. A Lapid associate suggested that Litzman help overthrow Netanyahu and subsequently join Lapid in forming a government. The ensuing political crisis was unavoidable. Netanyahu called early elections, after which the ultra-Orthodox parties were the first to enter the government coalition.

Litzman and Netanyahu usually found a way to overcome disagreements and avoid crises through dialogue. Nonetheless, the two occasionally found themselves at odds, often when the ultra-Orthodox media raised controversial issues and demanded action. Such was the case in summer 2016, when the ultra-Orthodox parties, under pressure from their communities’ websites, withdrew from agreements they had reached with Netanyahu behind the scenes over prayer arrangements at the Western Wall, Judaism’s holiest site.

When the next crisis erupted, over maintenance work on the Sabbath by the state-owned rail company, Litzman became a direct casualty. In November 2017, the ultra-Orthodox website Behadrei Haredim documented work being done on the railway on the Sabbath, despite a coalition agreement that only emergency repairs would be conducted on the Jewish day of rest. The information was brought to the attention of the Ger rabbi before Litzman had briefed him, and his opponents leaked reports that the rabbi was furious with him.

A source involved in the Ger court said that since that affair, the rabbi has never fully trusted Litzman and also has the ear of his opponents, including Hanoch Zeibart, the mayor of the ultra-Orthodox town of Bnei Brak, Jerusalem City Council member Yohanan Weitzman and other wheelers and dealers of the Hasidic sect.

According to the source, who spoke with Al-Monitor on the condition of anonymity, Litzman’s opponents kept the Ger rabbi abreast of the increasing number of reports emerging in February about the criminal investigations into Netanyahu. They expressed concern that the government would not see out its term and therefore would not have time to pass the ultra-Orthodox draft exemptions law, one of their major issues. Netanyahu promised Litzman and Gafni that the proposed bill, which the Supreme Court struck down in 2017, would be revised this year. Defense Minister Avigdor Liberman, chair of the largely secular Israel Beitenu, however, also sensed that elections might be near and declared that he would oppose the version being promoted by the ultra-Orthodox.

Litzman’s opponents took advantage of the concern over Liberman’s threats and convinced the Ger rabbi that the bill had to be pushed through quickly. Contrary to the policy of ultra-Orthodox politicians, the rabbi ordered a head-on confrontation. After issuing an initial ultimatum — opposing the 2019 budget unless the military draft bill passed a preliminary Knesset vote — Litzman projected an even tougher stance and demanded final Knesset passage in return for supporting the budget.

The crisis lasted almost two weeks, until Netanyahu saved the day with a compromise, Litzman took a slight step back from the brink and the Knesset adopted the bill in a preliminary vote. Until the proposed legislation wins final passage, however, the ultra-Orthodox cannot boast of a real achievement. At this point, Liberman still opposes the bill, which makes final approval a complex task.

The reasons behind the eruption of this political crisis, and the way it has been handled, reflect the divisions among the ultra-Orthodox parties and a leadership crisis. This is likely to affect the next coalition clash, and there is no certainty that even an experienced politician like Netanyahu will manage to resolve it. The weakening of Netanyahu’s ultra-Orthodox allies, chief among them Litzman, signals growing friction over issues of religion and state in Israel.