With rabbis and residents disobeying instructions over the coronavirus, Israeli paratroops were dispatched to the town of Bnei Brak to restrict entry and exit. 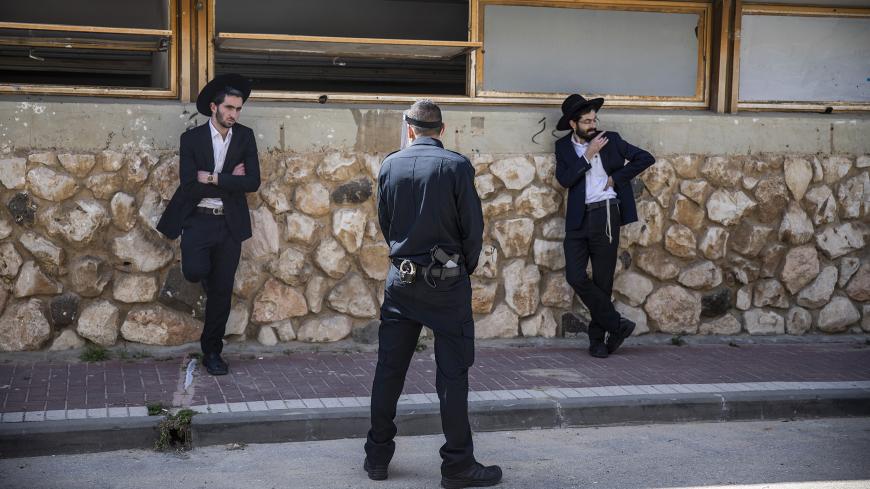 An Israeli policeman stops Orthodox Jews who insist on carrying on with their prayer at Ponevezh Yeshiva, a Jewish institution that focuses on the study of traditional religious texts, despite the imposed lockdown amid the coronavirus pandemic, Bnei Brak, Israel, April 2, 2020. - Ilia Yefimovich/picture alliance via Getty Images

The Commando Brigade of the Israel Defense Forces (IDF) was formed five years ago, bringing together three elite infantry units — Maglan, Duvdevan and Egoz. The brigade is trained for particularly difficult warfare behind enemy lines in situations of tactical and numerical disadvantage. It simulates clashes with Hezbollah and Iran’s Revolutionary Guard Corps, elite Hamas units and particularly daring special operations deep in enemy territory. It provides the IDF with a clenched fist — an integrated, fast-moving, mobile force for special operations.

The brigade’s soldiers never would have believed that five years hence the IDF would task them with a strange mission, in which the “enemy” is allegedly within. It wears bizarre black uniforms and maintains weird habits. The new task of this elite unit, with the support of soldiers from the Homefront Command and about 1,000 police, is one that has never been assigned to the IDF — saving the Ultra-Orthodox, suburban Tel Aviv town of Bnei Brak.

Bnei Brak is Israel’s most densely populated town, perhaps one of the most densely populated in the world. Its 200,000 residents are mostly ultra-Orthodox Jews. Unfortunately, it is not geographically isolated. On the contrary. Bnei Brak is crammed into the heart of Israel’s largest and most crowded metro area, within spitting distance of Tel Aviv, adjacent to and intermingled with the towns of Ramat Gan, Givatayim and Petah Tikva.

Life in Bnei Brak is frozen in time, replicating the mores of the 19th century Jewish shtetels in Eastern Europe. The deeply observant Jews spend most of their days in prayer and Torah study. The fertility rate is very high. Most homes do not have computers, televisions or smartphones and are not hooked up to the internet. They do have an abundance of holy books. A synagogue and yeshiva can be found at every corner and, of course, lots and lots of kids. This population lives in the year 2020 but is more in tune with previous centuries. It only obeys the edicts of rabbis on every facet of daily life. Life is dictated by the rules of the Torah or the Talmud and their interpretation by rabbis and spiritual leaders. They are cut off from the media and institutions of government, living in a ghetto surrounded by high walls of isolation and segregation.

All these facts largely explain how Bnei Brak became a ticking coronavirus time bomb. According to various projections, at least one-third of the population (or about 75,000 people) have been infected with the virus. The crowding, disregard of instructions by health authorities and the relative indifference — “everything is in the hands of God” — have provided the virus with a breeding haven. Long after most Israelis were self-isolating at home, not going to work, maintaining a 2-meter distance from each other and disinfecting their hands every 30 seconds, life in Bnei Brak’s teeming streets continued almost unchanged. Residents generously spread the coronavirus to their fellow synagogue worshippers, neighbors and family, creating the disaster that now afflicts them.

On March 31, when the extent of the disaster emerged, the town urgently summoned Maj. Gen. (Res.) Roni Numa, one of the most talented IDF commanders of his generation, and handed him control. The IDF, for its part, provided him with its Commando Brigade. Meanwhile, the Bnei Brakers themselves started to realize the trouble they were in. The turning point came when state authorities reached out to the town’s rabbis and spiritual leaders with an urgent plea to mobilize to save their town. The residents began to adapt their behavior and obey orders — all but an especially radical group (known as the “Jerusalem faction”), which refuses to recognize the authority of the state, is contemptuous of Zionism and leads an ascetic, radical lifestyle.

On April 2, the government approved new defense emergency regulations for Bnei Brak, authorizing the police and military to impose a virtual blockade of the town. The mission is almost impossible. Bnei Brak is not delineated by natural borders; its streets, alleys and paths merge and mesh with those of the surrounding towns. Nonetheless, a decision was made to prevent all entry and exit to the extent possible. Numa also decided on a speedy evacuation of the town’s estimated 4,500 residents older than 80 in order to safeguard their health. The next stage will be to remove all those aged 55 up who have contracted the virus that causes COVID-19. Under the new regulations, residents are restricted to their homes and the military will provide them with food and other necessities.

Numa found himself in the throes of a chaotic event, with overall responsibility for “koshering” the dishes of 200,000 residents, obtaining matzos and eggs for an entire town, and overseeing the town’s highly developed community charity enterprise that feeds thousands of indigent residents. Nothing in the decorated general’s decades of grueling training and battlefield experience prepared him for such an event. He is trying to instill a measure of order in the strangest, most chaotic yet efficient mess on earth, under the very real threat of the pandemic time bomb that continues to spread around him.

Meanwhile, the most senior ultra-Orthodox politician in Israel, Health Minister Yaakov Litzman, tested positive for the virus, after apparently praying in group, in violation of the orders issued by the ministry he himself heads. The news stirred up public anger and calls for Prime Minister Benjamin Netanyahu to fire Litzman at once and replace him with a non-Orthodox minister in the new power-sharing government he is forming with Blue and White leader Benny Gantz.

In recent days, other ultra-Orthodox towns, such as Elad and Modi’in Ilit have also been identified as coronavirus breeding grounds. “The corona crisis in Israel has now become the crisis of the ultra-Orthodox sect,” a senior participant in the Bnei Brak “war room” told Al-Monitor on condition of anonymity. “We are already at the blocking stage in secular communities, where the rate of infection is slowing. What is left is to try and control the pockets of the coronavirus among the ultra-Orthodox. I hope everyone learns a lesson from this unfortunate development.”

The epidemic is further exacerbating the already tense relations between the ultra-Orthodox and the rest of society. Occasional calls are now being heard from non-religious Israelis to deny ultra-Orthodox patients access to respirators should a shortage arise. The ultra-Orthodox, for their part, are protesting what they regard as anti-Semitism and hatred.

The police and IDF will presumably get a handle on the situation in ultra-Orthodox communities in the coming weeks. The question is how relations with them will play out on the day after, and in what kind of soul searching the ultra-Orthodox themselves engage. One of their spiritual leaders, Rabbi Chaim Kanievsky, was the one who signaled the start of the coronavirus spread in Bnei Brak when he instructed his followers to keep studying in the yeshivas and other religious study venues even after the state shut down all schools. Will the ultra-Orthodox realize that anything other than religious affairs is under the purview of the state and not of the rabbis? Will some experience a crisis of faith given an amazing realization that the Lord does not protect all his believers? We will just have to wait and see.